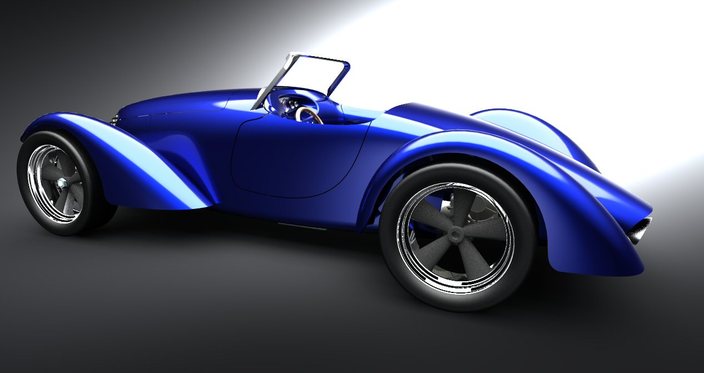 Dan Vinson is the guy at Solid Edge responsible for planning the new developments in Parts. He does a bit of surfacing, and is in charge of most of the advanced modeling areas I’m interested in, such as multi-bodies. Dan’s a fun guy to get to know, and he makes his own cool models. If you get a chance, he’s one of those guys worth looking up at SEU or another event.

How did you get started at Solid Edge? Chris Dayton said you helped get him in, so you’ve been around longer than Chris…

I joined Solid Edge in 2004 after a very interesting interview process that was led by Jeff Walker. Jeff and I had shared a high school drafting class some 20 years before. My background in product design, construction and CAD were just a few of the pre-requisites.

What was the first big project you worked on in planning?

The Direct Modeling suite of commands back in V17. They were new and very popular. We ended up with an entire toolbar of commands that allowed user’s to perform some basic edits on an imported model. That group of commands were the seed of Synchronous Technology.

How did you react when you first saw Synchronous Technology?

I was lucky enough to be one of the advance team that created Synchronous, so my first glance was a series of technical presentations that suggested that this was possible. When the first prototypes were shown and tested, I remember feeling like I was watching a child take his first steps…excited, scared, and a little proud.

I know you make some pretty cool automobile models. Do you make these in the course of working on new features? My car models are part of the reason I work here. Just like our users, I have an idea in my head that exceeds my skill to communicate it any other way. Solid Edge lets me make those models and drawings quicker and far better than mere pen and ink can. Many of the models are created to research new functionality, or to find better ways to use our tools.

The model called “853 Concept” was my first model in Solid Edge. It was constructed in my spare time to help me familiarize myself with the entire Solid Edge product. Building a car requires most of the environments and many of the modeling features. So, it let me learn the product like a real user. This helps me acquire the user mindset and lets me see the problems more clearly.A simple metaphor I like to use is, “I’m a painter and I get paid to make paintbrushes.” What is your favorite part of the process of getting new features into the Solid Edge software?

The speed. Software development does not suffer from the laws of physics like typical manufacturing does. No metals need to be cut; no workspace needs to be cleared; no materials need to be cooled. This allows us to move much faster than anything I’ve ever designed before. So, we move very fast and that makes it exciting when you’re attempting to stay ahead of the user’s needs and a very large, efficient team of developers.

I know ST7 is old news for you, but users are just settling in with it. What’s your favorite new feature in ST7?

The rendering enhancement with KeyShot is my favorite.. KeyShot’s rendering capabilities are unmatched at providing beautiful, better than reality, images of digital models.We integrated it so that now all Solid Edge animations can be rendered through KeyShot to create movies of their assemblies and exploded views. Now everyone can see the beauty of our users’ models with this amazing new tool. I look forward to seeing some eye-popping movies from you guys.

Without giving away any ST8 secrets, what one feature would you want to see added to Solid Edge if it were just up to you?

Actually, it is up to us planners. So, don’t spread this around….  Synchronous Surfacing.  Right now, Ordered does this type modeling better. I think Synchronous Surfacing could improve the modeling experience due to the fact that the feature tree doesn’t have to be computed during an edit. This would make the interaction with large complex models faster. As I stated before, Speed is my favorite part of this process.

Use the synchronous feature library!!! Why remodel when you can re-use?

This article first appeared on the Siemens Digital Industries Software blog at https://blogs.sw.siemens.com/solidedge/interview-with-dan-vinson-product-planning-for-parts/