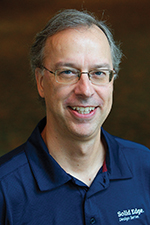 Since your promotion to VP of Development for Mainstream Engineering a few months ago, how have your daily duties changed?

I spend more time interacting with the sales and marketing functions. I try to stay very involved with Solid Edge from a technical standpoint, but there’s just a lot more interaction with sales and marketing and making sure we’re coordinated. I now have responsibility for FEMAP also, but I don’t find that I need to spend much time on that, just because they (FEMAP) are a very self-contained and competent team, and there is very little that I need to do.

Are we going to see a bigger push on FEMAP now that you’re over that as well?

From a development standpoint, I don’t think we will see much change. Again, they are very self-sufficient, and write great software. I am trying to work more with marketing and sales folks to get more emphasis in places where FEMAP is strong, such as in aerospace. Those tend to be very large customers, sort of a different sale to get those folks, so we’re working on some ideas there. But no real changes in development, just because they’re a really strong team.

The public feedback on ST7 has been very positive. What area of the new software do you expect to have the most impact on new or existing users?

I think the biggest things that I get feedback on are the core things that people use every day. I kind of have this mantra now “Better at things you do daily”. And so whether that’s how you interact with the units, or dimensions, things that may have been messy in the past. For example we default now to the correct standard based on the locale that you’re computer’s set to, just all the little stuff. Measurement needed a big overhaul. Holes. There’s just a ton of stuff that’s better at what you do daily.

In what ways does Solid Edge help users get more value from their maintenance money.

I think right now there is a lot of what I call “CAD Fashion” going on. Shiny-new-objects kind of development, where the honest truth is that users just want to do their engineering tasks more effectively. Maintenance of course pays for support also, but beyond that Solid Edge is not using folks money going back and adding shiny new objects — We’re improving the things you do daily.

There have been a couple of changes to your staff in the last year. Can you introduce the new faces to users, and how will that affect customers?

Neil Perez has recently come on staff to manage software partners. That’s a super-valuable addition because he was previously working with the reseller partners who sell Solid Edge. He has a lot of good insight into what those partners are looking for to complete customer demand, for example, add Solid Edge plus eCAD or Solid Edge plus CAM, or those kind of things. So we’re really starting to deepen our ecosystem around Solid Edge as a result of Neil coming on board.

And I also recently hired a business manager, Michael Kelley. We needed better insights into how people are buying our products, what kind of mix of products they buy. Having Michael in this position also gives me an opportunity to get more time on product. There’s a lot of logistics around all the business between contracts and partnerships and so many different things. Michael has provided me the opportunity to focus on the core of Solid Edge things instead of the surrounding business.

From your perspective, which products in the Solid Edge line don’t get the attention that they deserve?

I think as an industry, mechanical engineering and design under-utilizes simulation capability. You can’t find a better value than Solid Edge simulation in terms of cost per benefit. You might find the answer to something that reduces your work or the need to do another physical prototype. Definitely too few people are leveraging that. And that’s not just Solid Edge specific, that’s as an industry we don’t leverage simulation tools nearly enough.

And then partner wise, I think eCAD. It’s one thing to have a 2D drafting package, whatever it is, and it’s a completely different beast to have an eCAD package such as Zuken to do your eCAD work. Solid Edge offers good opportunities there. And then of course the whole CAM thing with CAM Express or CAM Works, there’s a lot of goodness you could bring in-house if you take a look.

Where do you draw the line between Solid Edge Simulation and FEMAP?

They are for different audiences, in general. FEMAP is generally for analysts, who deeply understand finite element analysis methods, and who need detail functionality. The analyst really wants to go in and move a node, and refine the mesh in a tight little area. Analysts understand that, and that’s what they’re paid to do. FEMAP is easy to use, but for a professional engineering analyst.

Solid Edge Simulation is designed to be not just for a guy off the street, but for an engineer who understands stress and strain and the way these things work. But he doesn’t have to be necessarily concerned with the fine mesh element properties. Generally speaking, the Simulation user is trying to get a first pass, which might save yourself making a prototype. Or you might start a problem and send it off to a FEMAP analyst for a more detailed look at things. It’s the difference between a smart, and well educated engineer vs a high-end analyst in their specialty.

Where do you see the distinction between CAM Express and CAMWorks?

I like people to self-qualify. I don’t want to tell them to buy X or buy Y. What tends to be true is that CAM Express has traditionally been very strong in the high-end multi-axis world, and CAMWorks has been strong in the turning and milling kind of things. People need to look at things themselves and compare them against competitive products and then make their decision.

The Solid Edge community in general seems pleased with the direction of Solid Edge development. How do you make sure that your development team is not just making any ol’ change, but they are getting the “right” changes?

The key to that is having people who are CAD-using engineers make the decisions. Unfortunately, some competitors have kind of stolen our expression, the way we used to describe this is “By Engineers, For Engineers”. We have a staff that reports to Jeff Walker, who are engineers who have been in the industry for a long time and know what real users want. They talk to users, they use the software themselves, they look at other products, and they ultimately decide how the functions work. It’s not some computer science guy trying to figure out how a mechanical engineer actually thinks. We have one or two industrial designers in that group, and a cognitive psychologist, all things that are built around figuring out the right stuff for people to use and interact with the software. The development team then helps to bring all of that to life.

How pleased are you with the rate of ST7 adoption at this point?

I’ve been pleasantly surprised about how quickly people are adopting the software. We just sent out a message that said that the software was available, and before you knew it there were people who couldn’t get license files right away – within minutes. People are implementing this in production immediately, within a week or two. No maintenance packs, no “let’s wait 6 months”. People adopting it at that speed says something about ST7, but also about ST6 and ST5, ST4. They have a confidence in this software, that they’re gonna put it in production, and it’s gonna work. That to me is the way that software’s supposed to be, but rarely is, so it’s very exciting.

This article first appeared on the Siemens Digital Industries Software blog at https://blogs.sw.siemens.com/solidedge/interview-with-dan-staples/