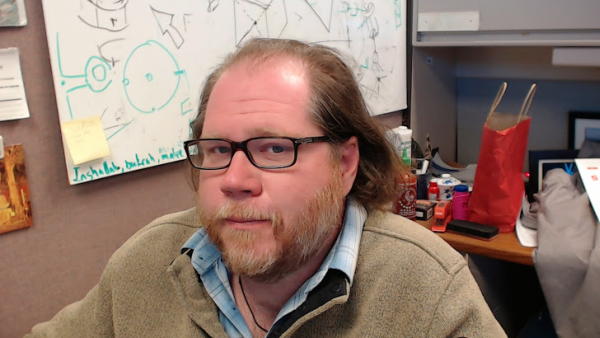 Chris Dayton is the Solid Edge planning guy in charge of Synchronous Technology as implemented in Solid Edge. Chris is a second generation CAD guy. His father also worked at Intergraph in the old days, and several of Chris’ current coworkers worked with him. So he has a bit of this already in his blood.

Chris started working for Solid Edge about V20 – right before the first release of Synchronous Technology. He was able to pick up the concept of Synchronous without too much other baggage from other ways of working. He helped Dan Vinson work on some of the original steering wheel concepts, and was around for much of the original development. Let’s let Chris take it from there:

As far as things that I’ve worked on here, I was there for the synchronous redesign for a lot of things like rounds, PMI dimensioning, patterning rework, sheet metal and stamping, rib, web, thinwall… Most of my focus has been in Part, but some in Sheet Metal, just sort of solving whatever problem needed to get done.

About a year and a half prior to me starting, they had been working with a special team from within Parasolid to make all that Synchronous magic happen. They realized they could pair together technologies to do some dynamic solves, realizing what all of that meant really is the heart of Synchronous.

Live rules was originally called Advanced Live Rules, and it gave you granular control over which relationships that it found would be used for a particular solve. Live rules would find these relationships between existing geometry, such as a few faces are co-planar, or some circular edges are concentric to a high level of precision. At a certain point, when one face is this close to being perfectly co-planar with another face, it’s probably no longer an accident –it’s probably intentional. So that’s what we take to mean design intent – the design intent comes directly from the model geometry.

The problem with our nested list of relationships that displayed all this to users was that almost no one outside of our testing department found them. Around ST4, they were starting to say “hey, we have all this technology, but users don’t know how to interact with it. Could we do something that is a little more visual, a little more graphical, a little more interactive that might help someone figure out what’s going on with their model?” This was not something I did in a vacuum, but we had a series of discussions talking about how we could show all this information to the users in a way that would be useful.

Synchronous Technology is noticing certain “coincidences” in the model that might want to be maintained. The design intent is inherently captured in the model. So we notice that, and give the user tools to preserve that or break or change the design intent, if they need to.

I think the best way to learn Live Rules would be a quick orientation that sits you down and explains the steering wheel, live rules, the opportunity to keep co-planar, maintain rounds, etc. These are things that I think people can pick up very quickly if someone just says “these things are in the same plane, do you want to maintain that, yes or no?” In a lot of ways it has been over complicated by a lot of people. I have great luck sitting down with people for 3-5 minutes explaining the biggest broadest concepts. There’s a tool kit of things you can use to turn on, turn off, the Steering Wheel, and Rock n Roll. I think between that and not being terrified of the Solution Manager will help. If you read the prompts, we do our best to hold your hand and walk you through the Solution Manager. With the Solution Manager, my advice is just to play. There’s a lot of time and attention that we’ve put into interrogating the model in real time. All the feed back we give might be a little scary, but that’s why you should play around with it just to get comfortable with the information the Solution Manager presents about your model’s relationships.

As terrifying as it is for some people to go from Ordered to Synchronous for that first couple of weeks, what invariably sets the hook is when you ask someone to go back and do something in Ordered. Then they really see “Synchronous is so much easier”. People get rightfully concerned that their design intent is going to get lost if they don’t have sketches with sketch relations – they’ve spent a lot of time thinking that way, and it’s hard to change. But the Synchronous tools are pretty powerful, where you can just “grip it and rip it”. Grab what you need, and if it doesn’t move like you expect, it doesn’t take too long to figure out why, using the Solution Manager.

I still use Ordered modeling. Synchronous isn’t about throwing away Ordered modeling. It should be noted that I work in what I call “hybrid mode”. Having used this stuff for a little while, I like this workflow where you build your underlying shape using Synchronous, and then for things like blends, rounds, or certain details like that, work better in ordered. I can drag the underlying base shapes, make the changes, and the rounds are still applied. It takes a little practice to find out exactly where the line needs to be between Synch and Ordered features, but once you find it, it will just make intuitive sense to you.

Oh, I’ve been so excited to tell you about this. Its one of those things where you take a half step back , but it allows you to move 3 steps forward. One of my babies in ST7 is the primitives command, you know, block, cylinder and sphere. I know there’s nothing ground breaking about these, but they save you a ton of time. Spheres particularly. You used to have to draw a circle, cut it in half, and then revolve it. These commands are really optimized. Most of the shapes you create are one of those types – block, cylinder or sphere.

What do you look forward to the most in future releases of Solid Edge?

Without giving away anything that we’re doing in ST8, I think what we’re doing is just keep making it easier and easier for the customers to use this stuff. We’re trying to find the best practices in our product and increase the usability.

Parting words of wisdom from Chris:

Play around, have fun. Let us know what you think. And read the prompts. We want this to work for you and we’re trying really hard.

Solid Edge 2022 Launch Recap: A CAD Expert's First Reactions… October 15, 2021 Read CAD software expert Tushar Suradkar's recap of the Solid Edge 2022 launch and what he has to say about…
Solid Edge Certification — A designers' perspective February 25, 2022 Chris Harper, Project Director at BF Engineering Recycling Services in the UK, recently completed all 3 levels of Solid Edge…
14-year-old Marcos Marfa uses Solid Edge to build his own… September 1, 2021 Discover how 14-year-old Marcos Marfa found his passion for design and 3D printing, and how he managed to build a…

This article first appeared on the Siemens Digital Industries Software blog at https://blogs.sw.siemens.com/solidedge/interview-with-chris-dayton-planner-for-synchronous-technology/