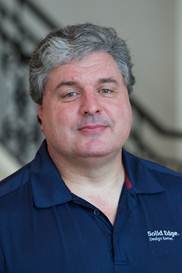 With ST7 just releasing for public consumption, I thought it would be appropriate to interview some of the people that make this software happen. Even though a lot of the enhancements are inspired by users requests, a good bit of it still comes from the planning people who define the new functionality.

Art Patrick is one of those guys whose enthusiasm for what he does really spills over. People take notice. They also notice his sense of humor and his southern accent. Art is the Solid Edge product manager for assemblies. His presentations at Solid Edge University are some of the best attended and most popular because of a mixture of great content, obvious knowledge of his subject, and a real flair for presenting useful information in a fun way.

Recently I sat down with Art and had a chat about what makes him so connected to actual users and so knowledgeable about the software. My questions are in bold, and where his answers are not in quotes, they are in italics. Where I’m just summarizing Arts comments, I’ve just used normal font.

How did you get started in CAD and Solid Edge?

In high school, Art had a memorable drafting and design teacher (on the board) that instilled a desire to design and make drawings look good. As he moved to college, computers were just starting to make an appearance, so he took some programming and graphics classes.

After school, his first job was as an Application Engineer with an AutoCAD reseller doing support and demos. He sold (and learned) a lot of products, but what he loved most was getting to go see what customers were doing. Most people were working in 2D, but there were some working in 3D wireframe. The first full 3D package he learned was Computervision. He describes CV’s surfacing as “arghhh!”, but the wireframe was excellent. “I was one of the few people back then that could do 3D machining, mainly because I could model the parts in 3D.”

Art continues, “So I got up here in Huntsville, quit the reseller, and started my own consulting firm. People would call us when they needed any kind of 3D machining or 3D modeling. I might go in and have to cut one or two faces on a particular part. The software wasn’t as sophisticated then as it is now, so when I went out to the shop, I always had my hand over that big red button.”

When you’re an independent and make things look easy, sometimes people don’t want to pay you what you are worth. That, and all the extra hours I was putting in, it seemed like I was averaging about $2 an hour. I learned a ton doing this but I was getting burned out and needed a change. I had a friend who worked for Intergraph, and I told him I was looking for a job so I applied and was hired to do product design and planning for their NC products.

Eventually I moved to the Solid Edge team where I did a lot of the original planning for the Draft and Sheet Metal applications, then on to Part/Synchronous and now Assembly. I thought I’d stay 3 or 4 years and then go do something else, but you get married, and have kids, and, well, you know…”

Product Definition” sounds like a dream job for a CAD nut, what is your part in putting a new release together?

When we put together a new release, we think of themes and we look for enhancements that will match that theme. For example, ST7 had a theme that was called “golden hour” This was to basically make functionality more accessible in the interface to new users. One of the biggest things we added in ST7 was the new Insert Component command. As a new user if you didn’t know how the Solid Edge Parts Library worked you didn’t know how to put a part in an assembly. It was one of those things where if you did it once you knew how to do it but doing it the first time was the trick. To help with this we added a new command that just pops that open and walks you through it. Now I use that All. The. Time. I just poke that button. Some customers that I’ve watched don’t use the Library tab any more they use the Insert Component command. It’s just easier.

You only have so many resources. If we could, we’d just wave a magic wand. A huge portion of what we do is customer driven. I’ve got a huge excel list of stuff that our customers have asked for through support or the beta program. And then the other portions of it are things we see from using the product. I’m a firm believer in using the product. You gotta use it and always be thinking about how to model better. For example, one of my favorite pieces of functionality we added in ST5 was the replacement functionality, where you can replace a part with a copy of itself.

It used to be a whole bunch of steps, but now it’s just, replace/copy, and it’s done. I use it all the time and it’s a huge time saver every time you use it. Especially with Synchronous, you just replace with copy, stretch here and there, match another part, and you’re done. This was something that customers never explicitly asked us for but we could just tell that we needed that functionality.

There are actually 4 or 5 other things on my list in the same area as replace. Theseare things that just bump up your productivity exponentially. They are not as exciting as new modeling commands, but extremely productive.

Also, in Assembly, with every release, we always like to try and do something to improve assembly relationships. Tweek ‘em. Add a new one. Add more capability.

What is your favorite new feature in ST7?

My favorite feature in ST7 might be Duplicate Component. ST7 is kind of out of my mind already. I’m thinking about ST8. Let me shift gears a little bit. We did a lot of performance stuff under the covers, which I like. This is tough. I really like the new Assembly Relationship UI things for select and show only. But Duplicate Component is probably my favorite. By the way, the word “duplicate” is a verb, pronounced with a “kate” at the end, not a “kit”. There was some discussion about that when we were creating this. The demo they put together at Solid Edge University using the engine was very good, but it doesn’t quite show all the power of this command. (That’s a tough job trying to find an Assembly that shows all the new stuff to its full potential) It’s another one of those tools that can save you a huge amount of time and I encourage users to try. Make a test assembly and give it a shot.

Why are your presentations at Solid Edge University so popular?

When it comes to doing presentations on the new functionality we create, I don’t really work hard, but there are a lot of people on the assembly team that do. And I really want to show off their work the best I can. I want people to say “that looked good”, “that will help me out” and “I want to try that”. I want people to enjoy it. When we have good stuff to show, it’s easy to show it. The hard part is finding assemblies where I can show all the new functionality in the limited time we have for a session, usually I build my own. I do not want to go in there to show assembly and have it suck. It’s a personal thing, because it looks bad for me, and it looks bad for the assembly team, so I’ll avoid that at all cost, even if it means missing happy hour.

What are the most underused functions in the software?

I think right now one of the most underused areas is modeling in the context of Assembly using Synchronous modeling. We have some customers that are embracing this and they are seeing some huge benefits. Every release we like to do something to improve this. Say you measure something and then have to go and make a change to equal that measurement. Why not just say “make this equal to that” and be done? It saves immense amounts of time if you can work that way. Honestly, we still have a lot of potential to improve in that area. We’ve done a lot, but we can do more. I have tried to be method agnostic when it comes to synchronous or ordered in-context modeling. Assembly has to be good at both but Synchronous is so much easier to work with because it does not create inter-part links which can cause issues with doc management/revisions etc.

I love to just go into an assembly, edit a part (or parts) and say make this face go up to that face on a different part. Done, Subtract this part from that. Done. Create a new part using the face of that part. Done. No Links required.

Ordered or Synchronous? Which way do you go?

I use both and for the most part use a hybrid approach. For most surfacing, of course you have to use Ordered at this time. For almost everything else I use Synchronous at least as the starting point. Synchronous for certain things is blazingly easy and blazingly fast. Cutouts and Booleans on the Synchronous side, Thin walls, rounds and chamfers on the ordered side. It really depends on what I am modeling. When I am modeling parts I am always thinking about how this part needs to react when edited in context. (Do I want to edit via profile/sketch or via face modifications or both?)

What’s your most wished for future feature? Can you talk about that?

I wanna go Pixar and make complex things move in an easier way. Customers sometimes have trouble making their assemblies move or it takes a lot of effort to do so. Some assemblies are like a Swiss watch, where everything moves. Even a medical bed – it has to work in several positions without colliding with itself or accessories. It’s not like an automated assembly line, but it still moves. Many people need this to validate the design or present it to their customer or to market this product etc.

Art likes to get involved with customers and their modeling questions. In fact, he winds up answering a lot of customer questions directly. “But I can’t really act as first level technical support because I have another job.” He says, with that ever-present chuckle. “you want the next version of the software to have that new cool feature, you ‘d better let me do my job”. His real job is of course planning what new functionality goes into the next version of the software. He counts understanding customer problems as key part of this.

Solid Edge 2022 Launch Recap: A CAD Expert's First Reactions… October 15, 2021 Read CAD software expert Tushar Suradkar's recap of the Solid Edge 2022 launch and what he has to say about…
Sophia Valentine cuts a clear path with a CNC plasma cutter… February 16, 2022 Discover how 20-year-old Sophia Valentine uses self-taught sketching, 2D CAD, sheet metal and welding skills to operate a CNC table…
Solid Edge Startup Spotlight: 120km range, up to 6kg payload… March 7, 2021 Tom Plümmer is the co-founder of Wingcopter, an aviation startup from Darmstadt that has dedicated itself to the subject of…

This article first appeared on the Siemens Digital Industries Software blog at https://blogs.sw.siemens.com/solidedge/interview-with-art-patrick-solid-edge-assemblies-master/