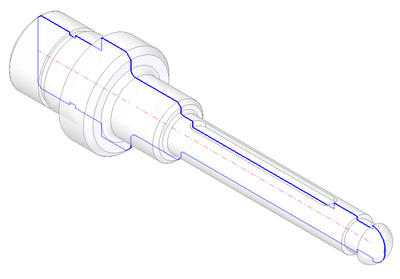 When using the ordered method or synchronous, base features are generally sketch-based. This is especially true for prismatic parts. But the similarity largely ends there. Whereas ordered sketch-based features are wedded to the underlying sketch for life, synchronous features which originated from a 2D sketch can easily jettison them and move on to their next life in the 3D world. In Synchronous modeling, primitives like the box and cylinder do not even leave a footprint in the form of a sketch.

But why so much fuss about sketches? Because the fallouts of living with sketch-based features are many.

1. When a sketch is deleted, the feature or model simply fails, to begin with. But why would any one want to delete a sketch. The answer lies in the newly emerging paradigm that any self-respecting 3D solid model should also be self-reliant and self-sustaining. But, behind the scenes, sketches pull the strings and your features and eventually the model merely acts like a puppet. Observe the various support elements that have gone into making the fuel tank model on the left. It is a clutter which seems like a hairball of reference planes and axes, dimensions and sketches, some of which are fully defined and rest under-constrained. It gives an impression of a building eternally supported by its scaffolding. Constraining a sketch is necessary for features to update successfully and to add to the misery, results of an update are not necessarily predictable.

Sketches are costly in that they need to be resolved for the constraints which consist ofboth dimensional and the geometric relations which bind the various elements together in order. All the sketch information must be additionally stored in the model which is another overhead.

With Synchronous Technology the 3D model is in full control of itself and knows its whereabouts in its entirety. The various Design Intents formerly called Live Rules examine and evaluate depending on the selection and the settings currently active. This kind of behavior is more meaningful and sensible for your product’s design intent. In most cases, Synchronous Technology can both extract and modify the size from the feature geometry itself, when required.

2. In the traditional method of modeling, parts which are controlled parametrically via dimensions need to hang on to sketches. Successful rebuilding of the part depends on how well the underlying sketch updates. To add to the chaos, when direct edits are performed, additional features are slapped on top of the existing and the base feature is clueless about the direct edit features. In some CAD programs featuring direct editing, it is easy to end up with two or mode dimensions together influencing a single feature parameter. Parametrically controlling such models then becomes impossible or unintuitive.

With synchronous technology, there is only a single source of truth for a feature’s parameter. So models are guaranteed to rebuild reliably and more predictably. In a synchronous parametric model, dimensions from the sketch can be transferred automatically to the feature consuming it unlike sketch-based features in the ordered method.

3. When it comes to editing a sketch-based feature that exists in a hierarchy within the model, visibility to the resulting changes is limited. Editing a feature which is up in the hierarchy essentially involves modifying its underlying sketch. The effect of the change on downstream features can neither be seen nor any downstream features be used as reference to position the feature higher in the chronological order of creation. When building a model with sketch-based features, your ideas are flattened down to a 2D world from the original 3D ones, compelling you to think in a 2D-only mode.

Working in the Synchronous mode saves you the hassle by eliminating the sketch dependency altogether. Sketches and the dimensions therein no longer control the feature that consumes them nor influence any downstream features that are dependent on it.

In the adjoining model which is a synchronous part, the dimension is applied directly in 3D between features which are separated by time. The hierarchy does not affect their behavior when the dimension is changed. Also the direction of the arrow can be used to decide which feature will move with the change in dimension. As a bonus in synchronous modeling, sketches are managed automatically for you. When a sketch is used for creating a feature it is automatically collected in the Used Sketches collector in the PathFinder. Observe that: Also, when sketch regions are enabled for a sketch, the sketch is displayed as a shaded element. These can be imagined as 3D regions with zero thickness waiting to be assigned a visible thickness value.

When we talk about history based modeling it is usually the features and the dependency they create in order for the model to built. We often overlook that the culprits behind feature and the eventual model failure are sketches. If you still need to work on 3D models by tweaking their cross-sectional properties and dimensions, Solid Edge provides yet another gem of a feature called Live Section which is covered in this previous article.

Solid Edge Startup Spotlight: Flying through virtual worlds… March 10, 2021 During his time at the MIT Media Lab, Patrik Künzler came up with the idea of developing a chair that…
Siemens Solid Edge Challenge 2021 November 19, 2020 Introducing the Siemens Solid Edge Challenge 2021 for Latin America! Every day, the market demands more innovative, low-cost solutions with…
Hybrid modeling in Solid Edge with syncronous and ordered… April 4, 2022 Changing your modeling approach can accelerate your product design process and enable entirely new ways of working. This post provides…

This article first appeared on the Siemens Digital Industries Software blog at https://blogs.sw.siemens.com/solidedge/fallouts-of-sketch-based-features/