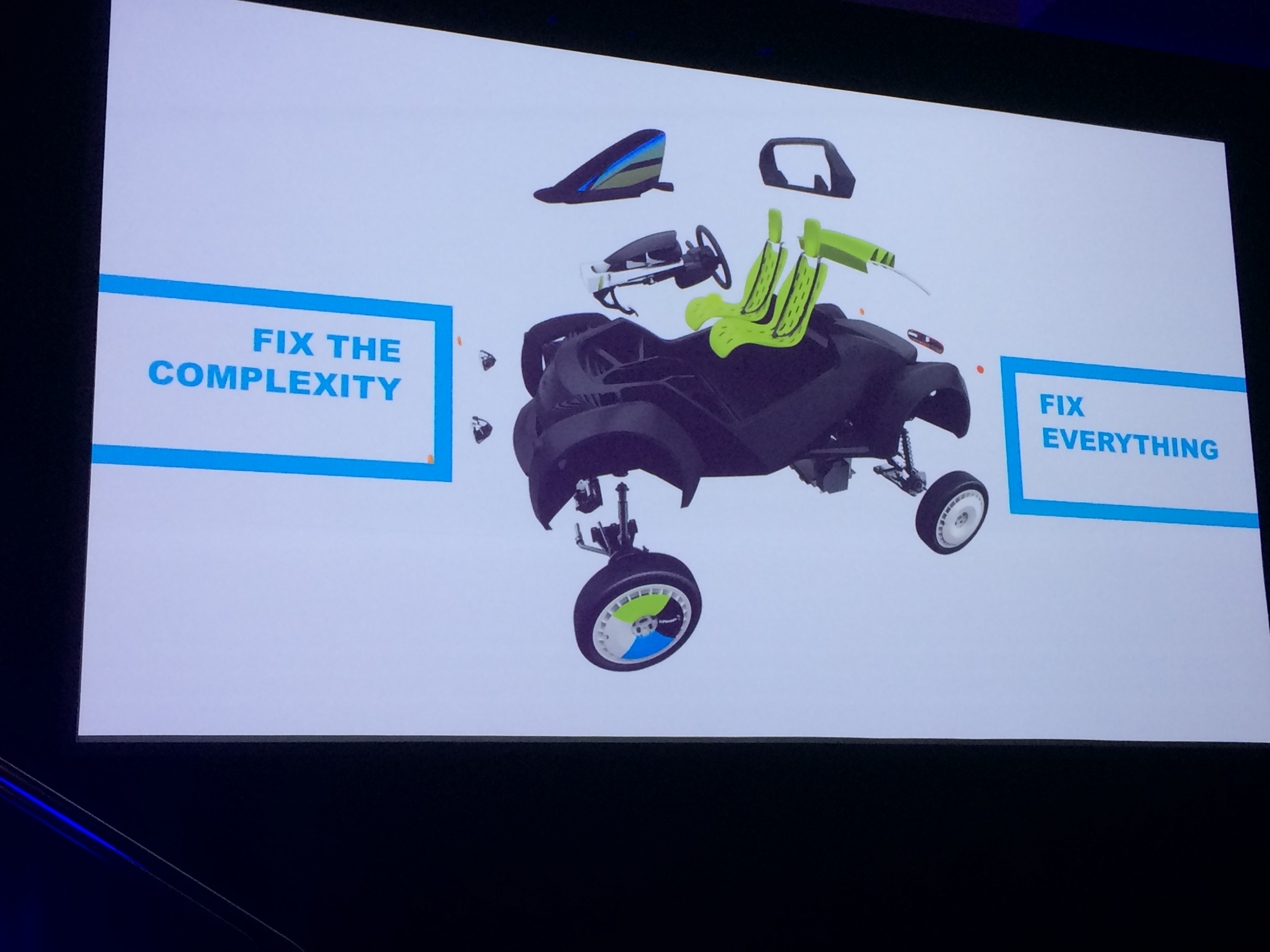 Excellence and innovation in automotive technology was on display in the keynote presentations at SEU16 in Indianapolis today. From a young engineer who earned a placement at the Red Bull Formula 1 team, to a garage startup that now designs and manufacturers race winning off-road vehicles, to a company disrupting the traditional way that cars are designed and manufactured. And all using Solid Edge as a key tool in their success.

David Cullimore is a 23 year old engineer who now works for Prodrive, a UK company that has been behind some very successful racing teams including the Subaru World Rally Team and now Aston Martin Racing. David has not had a smooth path to his current position, he did not get the required mathematics grade for a traditional mechanical engineering university course, so chose to study industrial design where he could still follow his passion for automotive design and CAD technology. He also formed his own team to compete in the Greenpower challenge, a competition to design, build and race and electric powered vehicle using a stanard motor and battery. David has been incredibly successful in Greenpower, his first car won 24 out of 30 races entered, and he recently won the Greenpower international challenge in his latest Jet II design. David uses Solid Edge to design his vehicles, recently focusing on improving the packaging compared with his previous design, reducing the frontal area and reducing drag. The results speak for themselves. David Cullimore presents his journey to a professional engineering career at SEU16﻿Jerry Zaiden from Camburg Engineering recounted his journey starting in a garage in 1997, adapting an old Toyota truck to compete in local off-road events. Today Camburg Engineering employs 26 people and is a leader in the design and manufacture of trophy trucks that compete in some of the toughest, long distance off-road races. A focus for Camburg Engineering is the design of suspension systems – they measure the travel of their suspensions in feet! (2 feet for the front and 3 feet for the back). And this is not for show, it is a necessity for traveling at high speed over rugged terrain. Jerry uses Solid Edge for the his design work and showed a great progression in his designs from adapting standard trucks to developing complete “unlimited” vehicles. Jerry left the audience with three key takeaways, firstly dare to innovate – think ahead and constantly challenge what you are doing. Secondly, dont always go it alone, partner up where appropriate. And thirdly, keep the passion and enjoy the ride! The third presenter on the automotive theme was Justin Fishkin, Chief Strategy Officer at Local Motors. Justin started with a video “The End” with the message that Local Motor’s mission is “we exist to shape the future”. Local Motors is certainly deploying a ground breaking business model for eample using “co-creation”, crowd sourcing design ideas from a large number of enthusiastic participants, from young designers with radical design ideas to retired professionals with deep experience combined with their own design ideas. Some of Local Motors recent products include the first 3D printed car that has only 50 components, to Olli, a new driverless vehicle aimed at moving people efficiently for the “last mile”. Local Motors have been using Solid Edge for their own design projects and it has been fascinating to follow their rapid progress in disrupting traditional automotive design and manufacturing practices. A new approach to automotive design from Local Motors﻿

We hope you enjoyed the keynote presentations at SEU16, all three presentations clearly demonstrated how, with perserverance and original thinking, you can overcome barriers to innovation. Let us know what you would like to see at SEU17!

Startup Spotlight: Quantron accelerates e-revolution in… March 8, 2021 Serhat Yilmaz and his colleagues at Quantron AG in Gersthofen, Bavaria (Germany) have come up with something big in a…
Solid Edge Startup Spotlight: Flying through virtual worlds… March 10, 2021 During his time at the MIT Media Lab, Patrik Künzler came up with the idea of developing a chair that…
Sophia Valentine cuts a clear path with a CNC plasma cutter… February 16, 2022 Discover how 20-year-old Sophia Valentine uses self-taught sketching, 2D CAD, sheet metal and welding skills to operate a CNC table…

This article first appeared on the Siemens Digital Industries Software blog at https://blogs.sw.siemens.com/solidedge/expanding-horizons-for-automotive-technology-at-seu16/