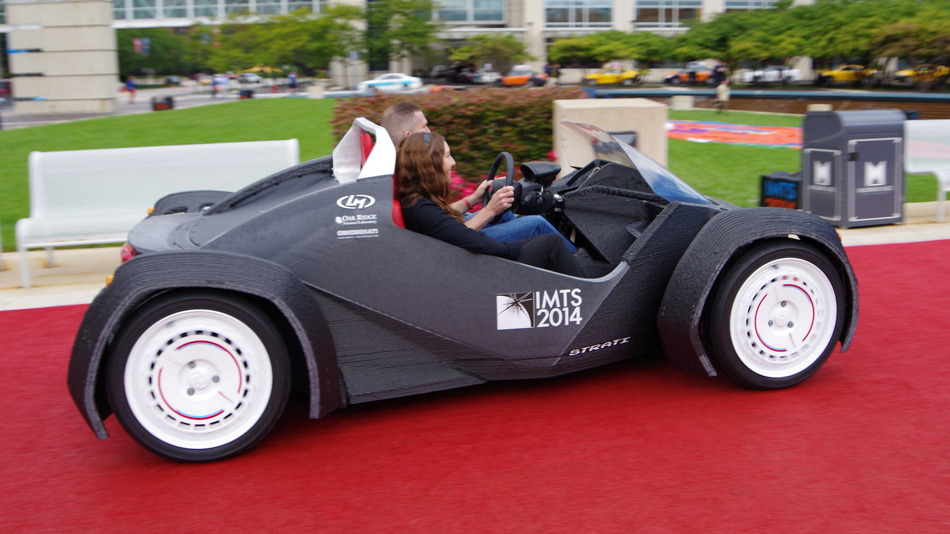 Cincinnati Incorporated (CI) recently designed and built BAAM – Big Area Additive Manufacturing – Machine using Solid Edge software. You may have heard of BAAM in connection with the first ever 3D printed car, the Strati, and Solid Edge, well, everyone has heard of Solid Edge.

Cincinnati Incorporated (CI) isn’t necessarily the company you think of when you think of 3D printing. CI has been around for 116 years and is well known for building heavy-duty manufacturing equipment. One of their equipment lines is for powdered metal part production, which CI classifies as “additive manufacturing”. This provides a link to the 3D print process. Most 3D print machines are found in a lab, or in an office. Rarely are they found in a real manufacturing environment. Says the BAAM Team at CI:

“Many 3-D printers are simply not manufacturing tools.  They make small parts, slowly with expensive material.  BAAM makes big parts, relatively quickly with affordable material.  We expect this will take 3-D printing from little parts like dental implants and hearing aids to big parts like the whole structure of a car and find applications in numerous industries.” But what is a 3D printer other than a big XY table and a Z head? Whether CI has designed and built a 3D printer before isn’t what this is all about. It’s that they have built stuff like this for decades. BAAM, it turns out, is based on Cincinnati’s laser cutter machine. Designers were able to use Solid Edge to design this machine with thousands of parts in a few months by reusing a lot of information, starting with the laser cutter.

CI also took advantage of another type of data reuse to speed the design cycle along – downloading purchased component geometry from vendors. Parts such as motors, bearings, bearing rails and bearing trucks were imported as STEP files. You can imagine how much time you would save being able to just download and import about 1/3 of the parts in your assembly. Sitting down with a blank screen, a purchased part, and a set of calipers is a very time consuming way to do this. Of course it helps that Solid Edge has a great reputation for handling imported 3D data. Let’s back up a little bit, though, and tell the story of how the idea of building a full-scale car came to fruition.

The Oak Ridge National Laboratory in Tennessee had received funding from the Department of Energy to develop additive manufacturing on an industrial scale. CI immediately recognized the synergy with their existing technology and interests, so CI and the Laboratory came to an agreement to develop what came to be known as BAAM – Big Area Additive Manufacturing. A great name for a machine with a big impact.

We’ve already mentioned that Cincinnati used Solid Edge CAD software to develop BAAM. During the development process, the Solid Edge model grew in detail and played a key role in the visualization of the end product. This was also helpful to collaborate with the Oak Ridge lab design team to add the components they were responsible for. CAD data even helps with some things you might not consider right away, such as locating the center of gravity for a large assembly to be lifted safely with a crane or forklift.

Solid Edge was a key part of the process as it allowed the machine designers to very quickly check things like hole alignment and part interferences in 3D. These are common sources of scrapped or reworked parts, and being able to catch mistakes of this sort early in the process is important.

Data reuse is a big theme not just in the story about designing BAAM, but also in much of the product lifecycle story in general. The Solid Edge data created by CI was also used by other firms downstream in the product development cycle, such as a contractor that created a rendered motion study using CI’s original data, and even stress analysis within the company itself.

The design data is further used to analyze the strength of the parts using Solid Edge simulation tools. On some of the simpler beam parts, hand calculations make sure you’re in the right ball park, but for more complex assemblies or parts with complex loads, Solid Edge provides tools that are easy to use, and handle the complexity with automation. One of the members of the BAAM design team said:

“I like Simulation Express as a gut check. It doesn’t take years of training to figure out how to use it.”

Further, the 3D data is again reused in a more familiar format for creating 2D drawings that help assemble visual data along with meta data such as bills of materials, part numbers and assembly instructions to create an entire picture of a product being manufactured from individual parts into a finished machine.

So we’ve got this platform which can 3D print on an industrial scale, and then add to the mix John Rogers, the CEO of automotive production innovator Local Motors. John understood that the concept of 3D printing was very much in line with some of the driving concepts of Local Motors; namely you don’t need a huge factory to produce vehicles that you then have to distribute all over the country – just build them where they are needed. Until now, we just didn’t have 3D printers that could make anything larger than a couple of feet long. John Rogers saw a demonstration of the combined CI/ORNL project and recognized it as the missing link.

CINCINNATI provided the machine platform for BAAM, which includes the frame, motion system, gantry, and control. It is based on proven technology that is in use today at thousands of customers. ORNL focused on the development of the extruder, the additive process, material, and software. The result was the development of the first “alpha phase” BAAM machine. “Strati” (Italian for “layers”) was the name for the crowd sourced Local Motors car designed through a contest selected from a number of submissions and voted on by the Local Motors community. This design was then optimized for the BAAM process and prepared for the functional internals including drivetrain, steering, etc. The plan was to print the chassis of the Strati live on the show floor of the International Manufacturing Technology Show in Chicago.

Local Motors provided CI the basic envelope of the car that they wanted to print, and CI used Solid Edge and TeamCenter Express to develop the BAAM around that envelope.

In an interesting twist, it turns out that some of the smaller parts in BAAM, such as the powder dispenser, a damper foot, and various brackets were themselves 3D printed parts. The development of BAAM was going on even as the machine was set up at IMTS. Again, we hear from the BAAM Team at CI:

“Innovations were happening so fast that the process used at the show had only been used to print a few test parts on BAAM before we performed the printing of the car.  The machine had a performance upgrade on the show floor that improved the delivery of the plastic from 12 pounds per hour to 35 pounds per hour.  This improved our build time from close to a week to just 47 hours.  In addition we had a revision of programming software that eliminated 99% of all the printing problems we had seen up to that time.” IMTS turned out to be a showcase for this new technology, but CI doesn’t plan to stop with what they developed for the show. The current work envelope of 2 x 4 x .87 m (6.6 x 13.1 x 2.9 ft) and material deposition rate of about 38 lbs/hr allows BAAM to print components up to 10 X the size currently producible, at speeds 200 to 500 times faster than current methods. CI plans are to go even bigger and faster. And you can bet that Solid Edge and data reuse will be at the fore front of that effort.

“We’re already working with ORNL to increase the work envelope to 2.4 x 6 m (8 x 20 ft) and increase the extrusion rate to 100 lbs/hr,” said a BAAM team member. “Increasing the Z-axis travel is also a priority.” The BAAM machine is linear motor-driven, like the laser cutting system before it, allowing it to maintain a perfectly level bed required for proper 3D printing.

SABIC Innovative Plastics was the company that provided the carbon fiber ABS blend used the print the Strati. They are also the first CI customers to purchase a BAAM. SABIC will be using the machine to test materials. The BAAM team has already found that carbon and glass fiber reinforced materials improve strength and thermal properties of large printed parts. Preliminary testing on other materials like PPS, PEKK and Ultem show that BAAM will be able to be used in a wide range of applications.

This article first appeared on the Siemens Digital Industries Software blog at https://blogs.sw.siemens.com/solidedge/cincinnati-incorporated-machine-3d-prints-a-car/