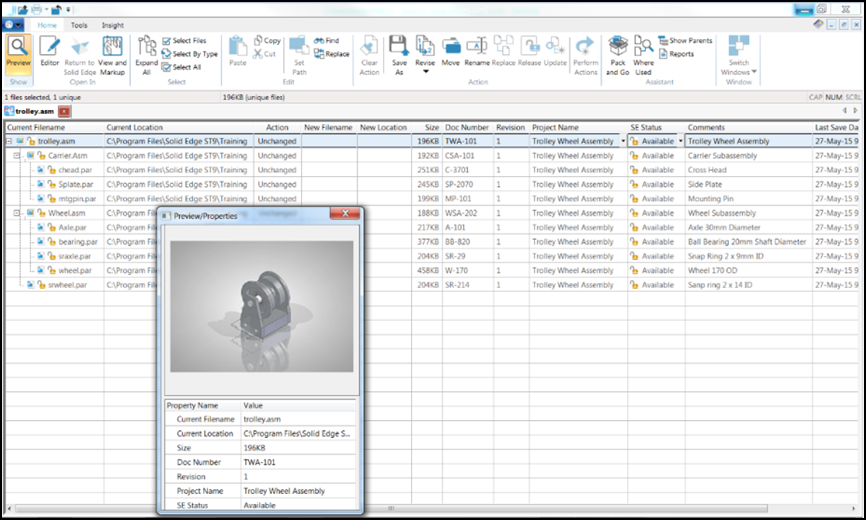 While Bird employs about 300 people, just ten of them use the Solid Edge CAD system to design the company’s radio frequency measurement and management equipment. So when it came time to look for a data management tool to manage CAD files and related technical data, the company turned to the product right under its nose: Solid Edge.  The company has used Solid Edge for the past 17 years. Two years ago, Bird began taking advantage of the CAD software’s built-in data management capabilities, says John Winter, Bird’s mechanical engineering manager.

Built-in Solid Edge data management provides excellent capabilities for small to midsize manufacturers who may be struggling to work with fast growing volumes of CAD files or who work from varied locations. Bird had been struggling to share files between the company’s head office in Solon, Ohio, where Winter works, an office in New York, and remote workers, Winter says.

Engineers had been using a file server to pass design information back and forth. Not only was this method incapable of locking down designs while engineers worked on them, but data also transferred slowly between users as data flowed between servers rather than directly to the users’ hard drives. And when an engineer was working on a file, others could be changing that very same file at the same time. That made for a lot of confusion, wasted design time, and backtracking.

“Now files open faster, even large assemblies, and if we’re running FEA simulations, that goes quickly too,” Winter says. “They’re all faster because there’s no cable to get your data across; the data is already on your hard drive. It takes like a second or two after I save a file for it to show up on someone else’s computer, even if it’s 2,200 miles away.” Engineers backup, share, and synchronize their Solid Edge files using the Google Drive cloud-based file-sharing service that works alongside built-in Solid Edge data management.

The Design Manager utility lets engineers review and edit properties of multiple files and perform revisions and release operations on Solid Edge parts, assemblies, and drawings. “It’s as easy as working with files already on your desktop,” Winter says. The Design Manager utility can be used to revise and release Solid Edge parts, assemblies and drawings

The company had more than 5,500 existing part numbers when they began using the data management system in 2015. Engineers add about 1,000 part numbers yearly to the system.The new data management capabilities enabled Winter to identify that around 1% of the legacy parts were duplicates. The system helped him rationalize the duplicate parts and will help prevent the creation ofduplicate parts going forward. This is important because Winter estimates that the average cost of a new part, from design through production and into service is about $4000.

Multiply that number by the number of duplicates and management found the Solid Edge built-in data management functionality saved the company around $40,000 per year. “We’re saving design time by not re-creating parts already in stock, and by not introducing possible errors into our designs,” Winter says.

Time savings comes in other forms too. “Previously it took from three to ten minutes to perform a simple search across our database of parts, whereas now it’s instantaneous,” Winter says. “Before, just on a search you could go and get coffee, but now you’re able to get right to work.” Users can search instantly for Solid Edge files based on file names, and standard or custom properties. They can also perform where-used searches that enable you to find which assemblies a part is used in so you can assess the impact of a proposed design change before it’s started.

“Really, we don’t have to wait for anything,” Winter says. “And if a computer blows up there’s a backup in the cloud. We’re safer and faster now than we ever were before.” This article first appeared on the Siemens Digital Industries Software blog at https://blogs.sw.siemens.com/solidedge/built-in-data-management-speeds-design-at-bird/