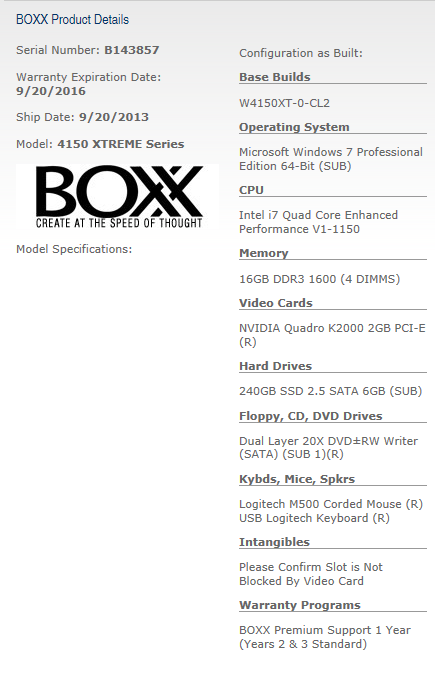 I’ve owned a computer from Boxx Technologies before, and I know they are really well built computers, so when the opportunity to review one came up, I jumped at the chance. The previous machine from Boxx that I bought (and still own), was the first computer I bought when I started doing freelance work, in 2005. It cost me about $4k and had a ton of extra connections, should I need them. But as I said, the computer is still being used. It was the last of the single core AMD 64 processors, if that helps you place it in time.

When my original Boxx arrived the two things that struck me about it was that it was immense, and second that it was heavy. The sheet metal bordered on plate steel. There was no cheap plastic, not even in the front grille. This thing was built to last. Over time, I have replaced a hard drive and a fan.

This new Boxx arrived in a smaller box than I expected. It is being marketed as a compact desktop. The spec sheet is attached at the end of this review. Here is a quick summary: It came with a Boxx T-shirt (still have my original T-shirt somewhere), along with some adapters that we’ll talk about later, and the expected documentation. It also came with Logitech mouse and keyboard. The mouse is the corded M500, one that has traditionally received good marks from CAD users over the years. I hooked it up to my 6 year old Dell 24” monitor.

Before setting up the computer, what does any good tech geek do? That’s right. Take it apart. Opening up the side panel was easy enough with two captive thumb screws. I can see a water cooling radiator and hoses. Very nice. But the radiator appears to be sitting at an angle. Jiggling it confirms that it is mounted solidly, and if you look at the front grille of the box, you can see that this is a design feature. The front grille, and everything attached to it is angled back a couple of degrees. There is another interesting design feature in the sheet metal on the top. There is a perforated vent that has waves formed into it. This is presumably to prevent a pile of books on top of the computer from sealing closed the top vents. You can tell ventilation is a priority on these water cooled machines. Vents on the back panel also increase the flow of air through the enclosure.

Expandability looks good, with extra space for hard drives and extra wire connections for power and data. You might need extra data storage, because there is a single 240 GB ssd. Fortunately, that drive is pretty fast.

Still talking about expandability, there is room for 32 GB of RAM (my review unit came with a single processor and 16 GB RAM). The video card in this machine is an nVidia Quadro K2000. This is not a high end card, and we’ll talk more about that later. The cost of this card on Amazon is about $430, while the K5000 is about $1700. Cost isn’t a linear replacement for specs or speed, but it does offer some comparison. The Windows Experience Index on this computer is a surprisingly low 7.3. This is a composite score driven by the slowest component in your system . In this case, the slowest component is the video card, with other components scoring 7.8 and 7.9.

The connections on the back of the box offer two HDMI connections and one DVI connection.  Fortunately, one of the adapters that arrived in the Boxx’s box was an HDMI to DVI. If you have to buy your own, this will run you $20-$40 in a specialty computer store (that means not Best Buy). It also had a VGA to DVI I hope primarily for nostalgia.

The HDMI connector is one that looks like a 30% larger USB connection. It takes up less space than DVI, the connector is smaller and easier to connect, and it allows higher resolution monitors, along with longer transmission distances (longer cords for a ceiling mounted projector), and it takes up less space on the back of the computer. But for most monitors in most situations, there is no shame in using DVI connections. Monitors the age of mine (6 years) are new enough to still look good, but old enough that they do not have HDMI connections. Many offices have a similar situation. There’s also a bit of a surprise with the ASUS Gryphon Z87 motherboard. It has a DVI and HDMI video connections right on the mobo. So if you’re switching video cards, you can just use the basic connections until you get the new card in.

Another oddity is that all the text on the backplane is upside down. It doesn’t hurt the function, it just looks odd. I had to make sure I had the chassis right side up and that I hadn’t put the side panel on backwards or something.

When you’re setting up a new computer, the first thing you want to see is rows and rows of USB connections. I always seem to run out. This computer has 4 USB 2.0 (black), 4 USB 3.0 (blue) on the back, and 2 of each on the front, for a total of 12 USB connections. They are easy to get to and well laid out. You might want to check your peripherals for which are 2.0 or 3.0, the speed benefit can be significant.

I love starting up new computers. The 4150XT went through some diagnostics when firing up the first time, walked me through some settings to establish a user name and password, and then landed me on the page where you enter the key for the OS (Windows 7 Professional – it comes “ready” for Win8, but thankfully it just had 7).

The code was on a sticker on the back of the computer. Easy enough to find, but nightmarish to read. It took me a flashlight, a magnifying glass and 8 attempts to read this 25 character code correctly. I know it wasn’t Boxx that made the code nearly impossible to read, that’s on Microsoft. But Boxx was the one that made me read it rather than entering the information at the factory. All in all it’s a minor point, but it was preventing me from moving on with set up, and it was a big annoyance. I don’t need that kind of reminder that my eyes are pushing 50 and might not be as good as they once were.

Solid Edge has a performance benchmark tool, and I used it to compare the Boxx 4150xt against two of the machines in my office with the Solid Edge software installed on them. The benchmark calls up models and moves them around the screen, recalculates hidden lines in a drawing view, and performs some I/O functions to test the hard drive.

The Xi M Tower in the comparison was custom built as a heavy-duty CAD box about 18 months ago, and the laptop is my work laptop, new about 4 months ago.

So even with the low WEI and comparatively weak graphics in the Boxx, it still won the comparison against a venerable workhorse.

While the cost of the Boxx seems high given the relatively basic graphics, the overall performance in the benchmarks was excellent. Boxx offers upgraded video cards for the 4150xt should you want to order one with graphics to match the rest of the components. Fast SSD drive and processors stepped up to the task. Also, the machine was very quiet. In fact, I could not hear it at all over the sound of the fans in the Xi machine.

The Boxx 4150xt’s compact size, functional and attractive enclosure, and quality high performance components combine to make a reliable and affordable workstation for the heavy duty engineering tasks you work with. Customer support at Boxx is first rate, so you can’t go wrong with the Boxx 4150xt. This article first appeared on the Siemens Digital Industries Software blog at https://blogs.sw.siemens.com/solidedge/boxx-4150xt-compact-tower-review/