Straight off the bat the first use that comes to mind is Alt + RMB for View Fit.

which is used frequently in conjunction with Alt + RMB Drag used for Zoom Area.

Further, in the Draft environment, Alt + Click on a callout or leader to add any number of extra vertices. Vertices are edit points that can be used to manipulate the leader line for e.g. creating a jog, etc.

Also Alt + Click on a curve in the Draft or the Sketcher to add or remove Edit Points on the curve.

Alternatively (no pun intended) move a leader line connection point to free space or to another element yet retaining associativity with the first element, by pressing the Alt+Ctrl keys while dragging the terminator handle.

When placing a Smart Dimension, keeping the Alt key pressed changes the appearance of the dimension. For e,g, the arc extends when placing the radius dimension.

Jogs can be added on projection lines of linear dimension using the Alt + Click.

Use Alt + Click to add one or more jogs to a selected coordinate dimension as below: Conversely, Alt+Clicking anywhere on a dimension will bring up the dimension value edit box saving the hassle of aiming the mouse pointer at the text. This applies to PMI and also to dimensions in the Sketcher and Draft environments.

In the Draft environment, click the Select tool and Alt + Click to create a polygon fence around elements for selection.

Use Alt+drag to detach a PMI dimension or annotation from one model element and attach it to a different model element. When a feature to which a dimension is added is deleted or suppressed, the dimension is orphaned and dangles as indicated with a brown color. Alt + Drag the handle for the extension line and drop it on to a edge or point to bring it back to life. In wire harness, the path is a curve but the Alt key provides more options to the path than a simple curve in the Sketcher or Draft.

To add a point to the end of the path, Alt + Click a location in free space where you want to add the point.

Alt + Click a point on the path to remove the point. When edit points are removed, the control vertex points move and the shape of the path changes. This holds true for points on a curve created using the Keypoint Curve command in the sketcher and simply the Curve command in the draft environment too. A quick way to set the center of rotation during view rotation is to press the middle mouse button and select a point or face to set the point about which to rotate the model.

Press the Alt key while selecting the middle mouse button to cancel. In a Fastener System balloon stack, edit individual balloons in the stack by pressing the Alt key while locating and click the first balloon to modify. Add or modify the prefix and suffix text of one or more balloons in a fastener system balloon stack by first selecting the stack and then pressing Alt while selecting the balloon to edit. For Centerlines,  Alt + Drag the center line handle to detach and also to re-attach it back.

As shown below, press the Alt key while dragging a single dimension (A) in an alignment set (B) to move only that dimension.

When inserting callouts for blocks with custom properties like Cost, Material, etc. sometimes the actual text may appear as ‘Error: Not Connected’. This can be resolved by Alt+dragging the callout handle and dropping it anywhere on the block.

Commands on the Ribbon bar can be accessed using the keyboard by tapping the Alt key which displays the key shortcuts for each tab, pressing which the Tab is activated and further key strokes required to access the commands are displayed.

Solid Edge is smart enough to add a shortcut key even for custom added ribbon buttons, so you can still use the Alt key (Alt C R for revision cloud) as seen below:

Note that its Alt V F and Alt C R and not Alt+C+R since the keys are not pressed in combination with Alt but in succession.

You can change the leader line attachment point using snap points displayed on the feature control frame. Pressing Alt while dragging the point (C) displays the snap points so you can connect to them.

Upon invoking the Zool tool:

Two more uses by Imi from the comments section:

Alt + Dragging a view disrupts or breaks the alignment with its parent view.

The list will be updated as and when I come across new uses for the Alt key in Solid Edge or when newer versions of Solid Edge bring in more uses to the Alt key. 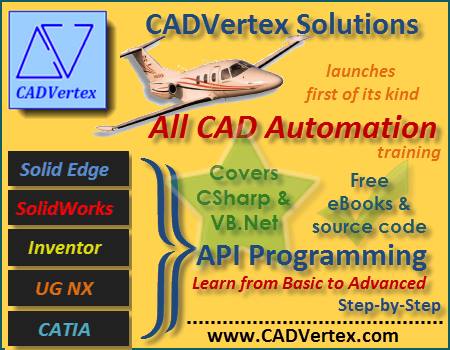 This article first appeared on the Siemens Digital Industries Software blog at https://blogs.sw.siemens.com/solidedge/alternate-reality-51-uses-of-the-alt-key-in-solid-edge/