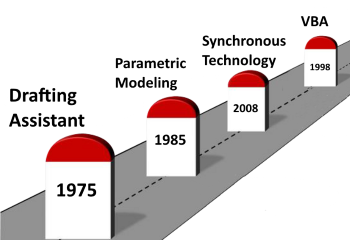 No. This is not another me too article on the brief history of CAD nor a foresight into the future of CAD over the next 20 years. In this write-up I attempt to discover through retrospection the most prominent features or modeling tecniques that impacted or changed the way we do our 2D drafting and 3D modeling everyday.

The origins and history of CAD can be googled in less than a second but the progress and adoption of CAD in reality was much slower and initially remained confined to a privileged few. Nor could CAD propel itself much outside its development labs. It was the proliferation of the PC which opened floodgates for desktop computing and CAD became an integral part of the design process. The first wave of migration from manual drafting to 2D CAD is long over and the second phase of 2D to 3D migration is under way. At the same time, new levels of challenges crept in as aptly summarized in a single line in this DigitalEng article by Bill McClure, VP at Siemens PLM “Engineers and designers are being asked to create more, faster, and with higher quality”.

Although that is a much recent comment, end users of CAD like you and me were feeling the heat much earlier after having settled down with and mastered our favorite CAD program. Weren’t we ? All the while, CAD vendors too were giving a serious thought to come up with something that would help create more stuff faster and accurately. In this context and in my opinion and experience, one of the major development was what we know today as Intellisketch in Solid Edge. The original avatar was the Drafting Assistant first introduced in Ashlar Vellum, later incarnated as Cobalt.

Drafting Assistant was introduced to facilitate the alignment and creation of new geometry. It tracked the position of the designer’s cursor and looked for nearby geometry. It then automatically displayed information alongside the cursor regarding nearby geometric features to which the designer can snap. The designer could create new geometry at those snap points, or create construction lines to serve as guides. The Drafting Assistant also remembered the last snap to intuit the designer’s intentions thus making it easy to snap to intersections in empty 3D space with equal ease. This increased the speed and accuracy of 2D drafting and 3D modeling by many folds.

Note the words in bold in the previous paragraph. This description from its Wiki page is what set the Drafting Assistant apart from all technologies and innovations made till that time for CAD. History will be repeating itself again in 2008 when Synchronous Technology would dawn on the CAD world. Synchronous Technology ‘s most prominent feature ‘the Design Intent’ also analyzes the model holistically and in real time to intuit the designer’s intentions thus making it is easy to make model changes faster and easier.

A classic example of an existing CAD program which benefited from this technique was 3D Studio Max which after being bought over by Autodesk from Kinetix, was rolled out into a new flavor called 3D Studio Viz which had OSnaps.

While 3D Studio MAX was a direct modeling program used predominantly by artists and animators, 3D Studio Viz enabled architects to use its features and power for modeling more accurate and precise geometry.

I remember when using AutoCAD 10 back in 1996, without the mouse or object snaps, we would either:

1. Key-in exact or relative coordinates from the current position in the drawing to move the cursor, or

2. Use arrow keys to move the cursor in combination with the Page Up and Page Down keys to speed up and down, finally pressing <Enter> just to pick a key point.

This was not only time consuming and tedious but looks amusing in retrospect, as this video illustrates.

Regardless of its ingenuity, smartness and being refreshingly innovative, parametric modeling was at its heart a simple divide and conquer trick, a need of the hour, to overcome the limitation of poor hardware. Celebrated author Matt Lombard has written volumes around this fact to everyone’s utmost satisfaction.

Soon feature-based parametric modeling became the gold standard for CAD and both the pioneers and those who followed in steps thought now all was well with the world. Everyone settled down to accept the following two notions:

This was in reality a very bad precedent that was set. We were sitting on the edge of a dormant volcano. The faults and cracks of parametric feature based modeling which predominantly was governed by underlying sketches for successful rebuilds started to show up as model complexity increased. So wait. You ain’t seen nothing yet.

For over a decade, CAD really didn’t progress much beyond adding more features and updating the user interface. The feature-based paradigm was not destined to take CAD to the next level. Draftsmen and designers alike desperately needed a new way of working to keep up with demands. Synchronous Technology arrived on the scene at just the right time and was developed to address this trend, as it combined the precision and control of feature-based design with the speed and flexibility of explicit modeling. The result is designers spent less time planning a model’s construction, less time waiting for design changes, and experienced significant time savings with remodeling imported or customer data for new designs.

Synchronous Technology freed users from the burden of dealing with features, from the hierarchical nature of model building, from the vulnerability of feature failures and gave the power of direct face modeling while still retaining the benefits of parametric and dimension driven 3D models.

Some parallel development elsewhere in the mid 90s that later turned out to be a boon was Microsoft’s Visual Basic for Applications or simply VBA which is the Lingua Franca of automation for Excel and other Office programs. The prominent feature of VBA is its natural language or English-like style of writing code using which one could create a macro to automate tasks in Excel including those for design calculations. Draughtsmen and designers across the industry spent several man-years in setting up such Excel sheets, pouring in empirical rules and well established scientific formulas in the tiny Excel cells which eventually spun into a whole new industry known as Knowledge Based Engineering.

All modern CAD programs and especially Solid Edge which was tightly integrated with Windows heartily supported automation through VBA.

These simply structured lines in a human readable format allowed thousands like me to virtually take control of our CAD programs, perform all pre-defined calculations followed by drafting or modeling sequences and quit the program. So clean and simple; almost a miracle! The level of sophistication of the automation projects that I work on currently, attempt to eliminate any manual CAD drafting or 3D modeling altogether. This is quite scary, but true. Beginning with the humble keypoint recognition for drafting through parametric and synchronous 3D modeling styles and finally automation tools sum up my list of the most influential features or technologies for my Drafting and 3D modeling needs.

Treat this as an open discussion since your preferences, experience and area of expertise when using 2D Drafting and 3D Modeling may be quite different than others. What are some specific features or techniques that you think highly influenced your CAD drafting or modeling habits or practices ? Write those in comments below.

Solid Edge Startup Spotlight: Flying through virtual… March 9, 2021 During his time at the MIT Media Lab, Patrik Künzler came up with the idea of developing a chair that…
Launching Solid Edge KeyShot (And Other… May 1, 2019 Recently user @KevinAlexander asked in the Solid Edge Community about an issue he was facing with trying to run Solid Edge…
Solid Edge Augmented Reality debuts at Realize Live June 14, 2019 New augmented reality capabilites in Solid Edge made their debut at Realize Live this week. Our users were able to…