To recap… So far in this series we’ve:

A pretty standard response surface optmisation study. However the real value in the application of simulation is the insights that it can provide into the behaviour of a given design. 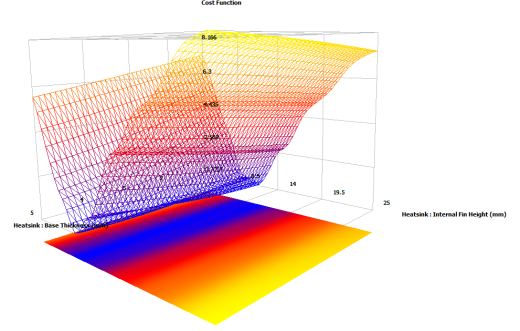 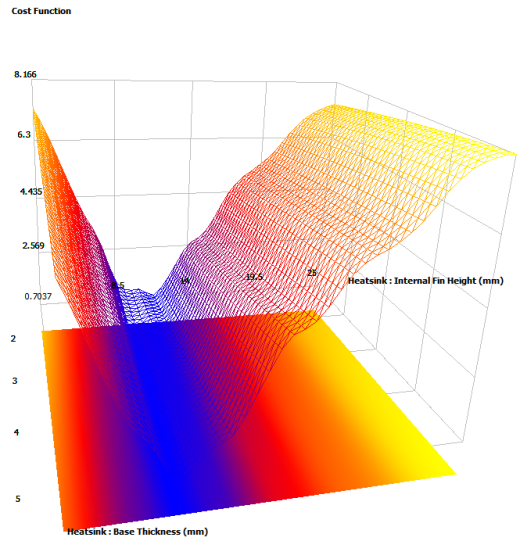 As the fin height varies large changes in the cost function are observed. Changes in base thickness result in very little change in the cost function. Already this is a valuable insight. In FloTHERM’s response surface viewer the interface resistance, the 3rd design parameter value, can be changed and the resulting change in the response surface observed:

A minimised cost function can be achieved by reducing the interface resistance value (by using a more expensive TIM) but with shorter heatsink fin heights (cheaper in terms of amount of material). Increasing the interface resistance (cheaper TIM) shows a minimised cost function at taller heatsink fin heights (more expensive heatsink). Such trade-offs are common (why can you never seem to get something for nothing?!)

This coupled effect can be further visualised by plotting the two dominant design parameters (interface resistance and fin height) against the cost function (and varying the other less important design parameter, the base thickness):

There is an outstanding question as to whether there are any other sensitive design parameters that should have been included in the study. A brute force approach would be to include lots of other settings (number of fins, fin thickness, material properties etc.) or some engineering judgement used to select those which are assumed sensitive. The only resulting effect on the approach is that it will need more computational experiments to be created and solved and the response surface generation time will increase (though that is measured in seconds).

Use of a cost function response surface to identify optimal design goals is not the only optimisation approach available in FloTHERM. Sequential optimisation (gradient based) is an alternative that I’ll show next.

This article first appeared on the Siemens Digital Industries Software blog at https://blogs.sw.siemens.com/simulating-the-real-world/2016/02/23/response-surface-and-sequential-optimisation-of-a-heatsink-using-flotherm-part-4-response-surface-inspection/