Happy Chinese new year, wishing you all prosperity, luck, health and fortune in this, the year of the Monkey! Also a great excuse to use FloEFD to study the aerodynamics of a sky lantern. Sky lanterns have been around for about 2300 years. Pioneered in the East, introduced to the West, in battle, by the Mongols in C13th and evolved to hot air balloons by the Montgolfier brothers who started by sending up a sheep, a duck and a rooster in a hot air balloon in 1783. Today sky lanterns are used mainly for celebration. Be it a paper design or a modern nylon construction, the principles of buoyancy, lift and drag are the same.

“Everything should be made as simple as possible, but not simpler.” – Albert Einstein. A great quote, especially when applied to engineering simulation and one that Sergio and I relied on in this present study. We took the common approach of assuming the lantern stationary, with air blowing down over it at the speed(s) that it goes through on its rise upwards. From that we noted the overall drag as a function of rise velocity. The heat input from the flame will result in a reduced density inside the balloon and from that the upwards buoyancy body force on the faces of the balloon, again these can be noted from the simulation. We’ll then put those outputs into an aerodynamic spreadsheet calculation that will work out the rise height as a function of rise time.

All that would be moot if we could not validate it against some physical test. Under complete non-laboratory conditions I performed an ‘experiment’ (with sincere apologies to anyone who has performed a proper experiment). Fastening the lantern to a reel of fishing line, I lit the fuel block, waited for the lantern to become buoyant, then let it go. I waited 30 seconds, then reeled it back in measuring how far it had risen in that time (length of fishing line that had been loosed). In those 30s it had traveled about 24m, vertical rise. 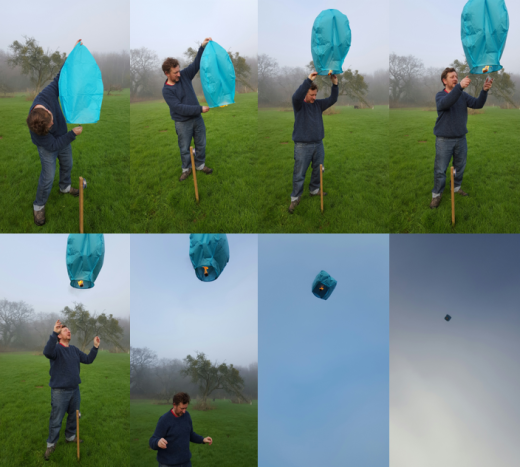 [There is some concern about the environmental impact of such lanterns. Suffice to say this one was reeled back in thus it was guaranteed that no cows were harmed in the making of this blog, yet again.]

When simulating the lantern, the amount of power that the paraffin (kerosene) wax block provided is a critical input. Short of a full blown combustion simulation, a bit of (chemical) engineering knowledge was applied. The block was weighed, it was then burnt when suspended, the time measured for the combustion to finish, then weighed again at the end. 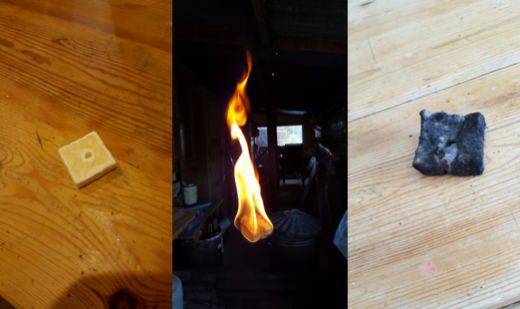 The difference in weight was the combusted paraffin. Multiplying its heat of combustion (J/g) with its mass then dividing by the time taken to combust gives the (average) power. This came out to ~1000W. This value was then dumped into the volume of space occupied by the flame in the FloEFD model. Here are some results when the lantern is rising at 1 m/s:

The spreadsheet calculation involved solving Newton’s 2nd law of motion, F=ma. In this case the force being the buoyancy driven Lift minus the aerodynamic Drag minus the Weight. The drag is proportional to the speed of the balloon, as is the acceleration.

FloEFD supplies the L and the Cd=f(v), Excel does the rest: 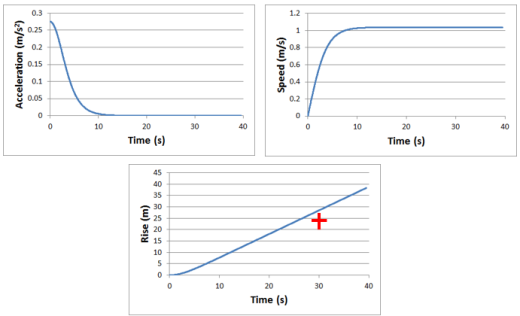 The FloEFD+spreadsheet post processing predicted rise after 30s is greater than what was ‘measured’, by about 14%. There are a number of possible reasons for this:

Suffice to say, when comparing simulation with experiment, ensure you are comparing like with like. Apples and oranges are both kind of round, but are very different fruit. In my experience the real value of 3D CFD simulation is in the insight it can provide, shining a light on why a system is behaving as it is, not just how it behaves.

If you want to see a much more thorough application of FloEFD then check out Boris Marovic’s IESF presentation showing application to IGBT cold plate thermal design!

This blog was a shared effort. The simulation being covered by Sergio Antioquia, Customer Application Engineer, Global Support and Services, Mentor Graphics.  Thanks Sergio!

This article first appeared on the Siemens Digital Industries Software blog at https://blogs.sw.siemens.com/simulating-the-real-world/2016/02/08/happy-lunar-new-year-floefd-investigates-sky-lantern-aerodynamics/