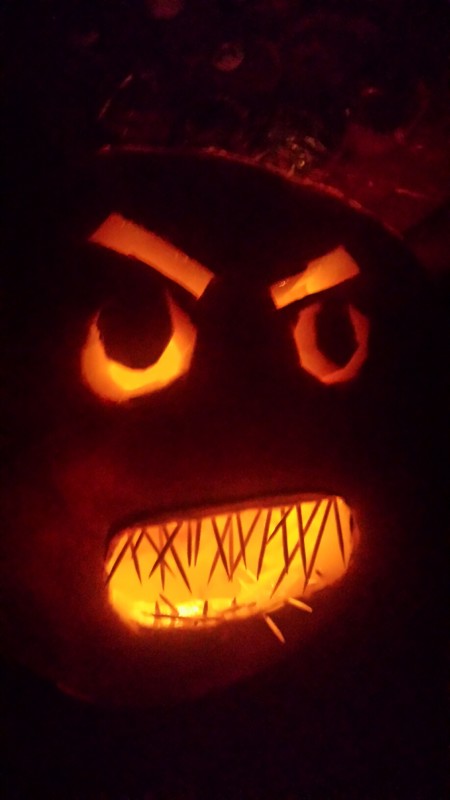 Picture the scene… The news channels had been reporting the disappearance of Simon Cary from the All Hallows Asylum for over a week now. Tom pretended, more to himself than anyone else, that there was no need for concern. Tom had been doing things as usual since the story broke, waking up, going to work, going through the motions.  The fleeting glimpse he had yesterday during his lunch break had begun to unsettle him though. It could have been anyone, it might have been anyone, surely it couldn’t have been Simon.

22 years is a long time, long enough to obscure, to bury, the most traumatic of childhood memories. Out of the group of them, Chris, Peter, Vincent and Tom, it wasn’t as if Tom was the ring leader, the main instigator of what happened. 10 year olds might be spiteful on occasion, especially in a group, but Tom didn’t consider himself solely responsible. Not the Tom of today, mortgaged, married and so very different, so very not that 10 year old. It was meant to be fun, a Halloween prank, they couldn’t have realized how Simon would have reacted, he didn’t have to turn around, he didn’t have to look behind him.

It was the shadow right at the bottom of the yard Tom saw this evening, out of the widow, in the fading dusk, that really began to set him on edge. Partly obscured by the overgrown bushes he’d been meaning to attend to for ages, might have been nothing, but it was taller, kind of hunched and almost moving, then it was gone, not there. Call the police? And tell them what? Forget it. Get on, ignore it, grow up, grow up, don’t ever be 10 again. But still his memories dragged him back to that night.

It hadn’t taken much to organise, a trip to the butchers, some string, some paint, a little imagination. The bravado of 10 year olds, giggling all the while. They’d set it up by the lopsided tree just outside old Macintosh’s yard up on Elm. It also hadn’t taken much to get Simon to join them, ever eager, ever smiling, ever willing to make friends. “Come on Si, a bit further, no seriously, you’ve got to see this! There, over there, just behind you, look behind you, LOOK!” and he did, and he shouldn’t have, why did he? It happened suddenly after he turned, no one expected it, how could we? We were 10, he was 10, how could he, why did he? It happened so quickly, so suddenly.

Flashing lights, interviews in badly lit rooms, mum and dad embarrassed to the point of silence, memories so fogged, so forgotten. As for Peter’s parents, they left the next week, never came back, sold up. Started afresh up in Castle Rock. Tom didn’t see much of Vincent and Chris after that, moved to separate schools, separated. Then it all faded quickly, returning to some semblance of adjusted normality. Grow up, forget and forget.

Tom sighed and went up to bed.  He hadn’t heard the rear door open, slowly, quietly, shadow passing up the stairs. Quick shave and to bed. Mirror steaming up as the hot water gushes out to fill the sink. 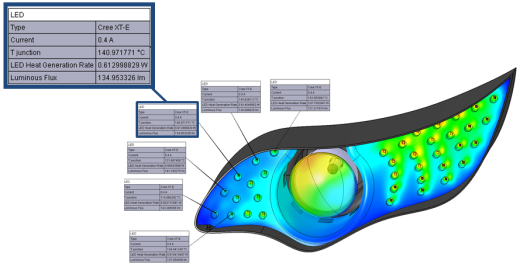 The fogging mirror was simulated with FloEFD using its unique ‘water film’ capability. The animation shows water film thickness on the surface of the mirror as white if the water film is > 0.3 microns thick. The original mirror is dark grey, simulation starts at time = 0 s with the mirror having no condensation on it but situated in a high humidity environment. Over time the humid air condenses on the cold mirror.  CAD faces can be set to be non-wettable in FloEFD, i.e. will not experience any condensation on them, much like if you mark out with a soapy finger some invisible words beforehand, as ‘Simon’ had done. Good life hack if you ever need to shave in a mirror in a shower room! The film simulation even predicts the dropping down of the water film due to gravity.

FloEFD has seen marked success when applied to automotive lighting applications, especially LED based solutions. LEDs run cold, compared to other lighting solutions, and so with a much cooler housing the risk of lens condensation, fogging and subsequent lighting safety concerns is much increased. The highly complex geometries coupled with FloEFD’s Octree+polyhedral meshing approach, a specialized sub grid boundary layer resolution method and an LED simulation module make FloEFD the perfect choice for such lighting applications, as seen in the following animation. The lamp cluster heats up, due primarily to optical radiative effects, and reduces the initial water film thickness due to evaporation over time.

…so, don’t let your simulation turn into a prolonged horror story, use FloEFD today! 🙂

Want to find out more about FloEFD’s automotive lightning strengths? Then check out this white paper on the subject.

This article first appeared on the Siemens Digital Industries Software blog at https://blogs.sw.siemens.com/simulating-the-real-world/2015/10/29/a-floefd-halloween-horror-story/