Holiday themed simulation blogs are very de rigueur of late so I thought I’d jump on the bandwagon in time for the July 4th independence day celebrations in the US. A series of events led up to the Declaration of Independence from Great Britain in 1776, one of the more notable being the Boston Tea Party that occurred on December 13th 1773. The tea ships the Dartmouth, the Eleanor and the Beaver, moored in Boston harbour, were boarded by a group of some 130 men who proceeded to dump all of their 342 chests of tea into the water. I’ve been to a few wild parties in my time but this party might have trumped them all.

Tea is a quintessentially British drink. It is rather symbolic, and maybe of no surprise, that the act of dumping such a British cargo was a key part of the American Revolution. The reason was not primarily associated with the high tax being levied, more that the tax should not have been levied without representation of the American colonies in the British parliament. The British parliament was not amused, toughened its stance and imposed other punitive laws. The American colonies were even less amused and the rest, as they say, is history.

Afternoon tea was a social event for the (British) upper classes in the C17th and C18th, held at 4pm and involving a pot of tea with some cake. The brewing of the tea in a tea pot is essential. Not long enough and the brew is weak, too long and the brew will be too cool and over stewed. So, with a tenuous skip and a jump to tie in some CFD simulation I thought I’d study how a pot of tea cools down, using our FloEFD general purpose CFD tool.

FloEFD works within an MCAD environment, easily allowing 3D CAD geometry to be studied for its thermal and air flow behaviour. A transient analysis, where the water in the pot starts at 100degC, shows how the temperature (liquid, air and solid pot) reduces over time as the energy stored in the water convects, conducts and radiates out to the ambient.

All CFD codes require a mesh of tessellated volumes to be created, covering all the model. The meshing in FloEFD takes a so called ‘boundary last’ approach, where a volume mesh is created first then, using an octree subdivision method, the mesh is refined to capture solid/solid and solid/fluid interfaces. Very little user interaction is required to prep this automated meshing feature. The quality of the mesh elements (Cartesian in nature, but split into multiple control volumes at solid interfaces for accurate surface representation) results in highly assured convergence when the governing equations are integrated over them and iteratively solved.

Post processing allows the complex liquid and air flow patterns to be studied and appreciated. 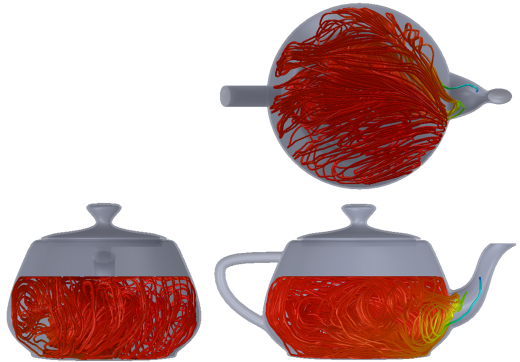 One thing FloEFD excels at is the ability to represent complex geometric features, be it cluttered assemblies or small gaps, due to the meshing approach and a unique treatment for the resolution of the convective boundary layers. A small gap between the lid and the tea pot is automatically resolved, the thermal insulation of the lid seen in the resulting temperature distribution, here after a few minutes of the cool down: 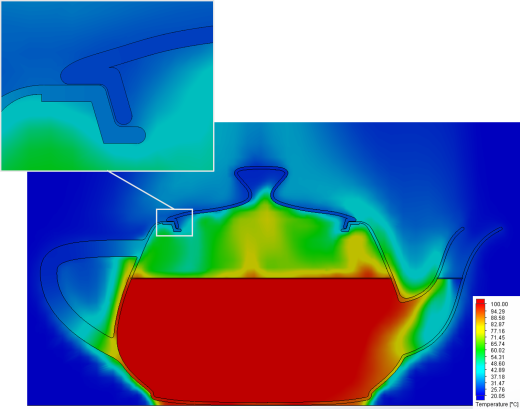 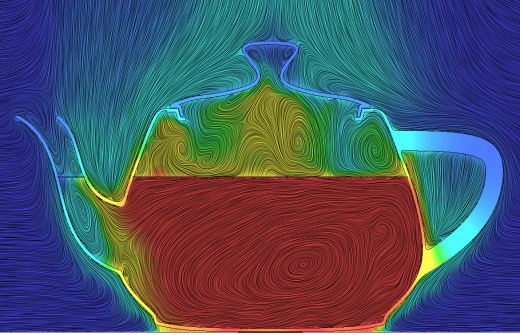 As a Brit I have mixed feelings about July 4th. Sure, the British empire is long dead and even the Commonwealth seems less relevant today than it did even a decade or so ago. We all live in a global village now so in some ways are closer together than ever, in other ways as disparate as we’ve ever been throughout history. Either way, happy July 4th American cousins!

2 thoughts about “The Boston Tea Party”

This article first appeared on the Siemens Digital Industries Software blog at https://blogs.sw.siemens.com/simulating-the-real-world/2015/07/01/the-boston-tea-party/