29th August, 2012. A Jaguar XJ parked in Fenchurch Street, London, suffered melted panels between 1200 and 1400, owner Martin Lindsay was shocked to find on his return. Not that the building at 20 Fenchurch Street had any malicious intentions but it was the concave reflecting surface of what is known as the ‘Walkie-Talkie’ that focused the sunlight on that particular day in such a way so as to increase the temperature of parts of the car beyond their melt temperature limits. Dubbed the ‘Walkie-Scorchy’, the reflectance issue has subsequently been resolved but it is a pointed reminder that, despite a rigorous engineering design process, unexpected things do occur!

FloEFD is a general purpose CAD embedded CFD tool, developed by the Mechanical Analysis Division of Mentor Graphics. It has a number of key radiative optic features developed for LED, automotive and automotive lighting applications. We used FloEFD to study the physics behind this freak melting occurrence. The results were quite startling.

The incident solar flux that occurs at the height of summer can reach 1400 W/m2. That’s 1.4kW spread over every square meter (11 square feet). Over and above the local air temperature, it’s why you feel so warmed by the sun. As many young children learn, take a magnifying glass and you can focus those rays to a point, increasing the radiative heat flux to levels that can harm ants and start small fires.

In FloEFD we setup a transient thermal simulation, at the exact time period that the car melting occurred. The building geometry, glass surface properties, local street and neighbouring buildings, even the car in question (swapped out for a generic high spec car for legal  reasons) were all simulated. The main results are shown in the animations below. The colour equates to the total heat flux landing on solid surfaces. The location of the car is shown by the arrow.

It is the radiative flux landing on the solid surfaces that cause the increase in temperature. Assigning material properties to the solids in the model results in those temperatures being predicted. 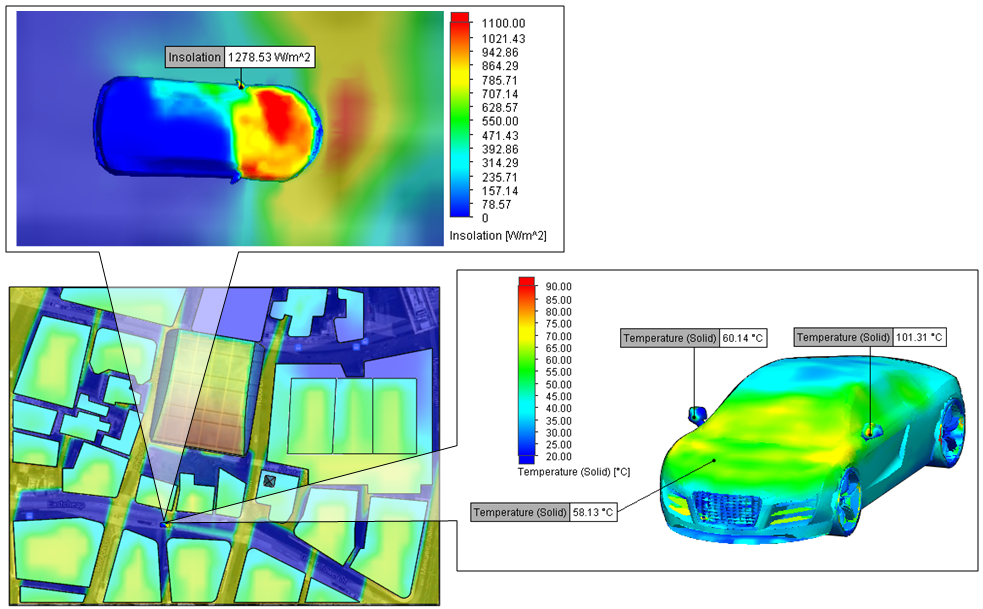 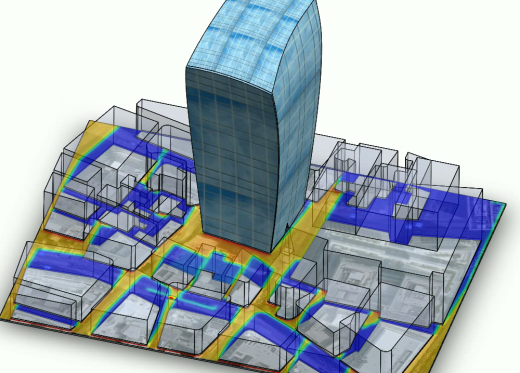 How a design will behave after it is commissioned in its actual operating environment is often not intuitively obvious. Simulation plays a key role in providing design engineers with the insight necessary to ensure there won’t be any nasty surprises, warranty issues or car repair bills to be paid!

You can try out FloEFD right now by signing up for a VLab cloud based trial.

Thermal Influence on Maximum Current Carrying Capacity January 20, 2021 Superconductors aside, anything that conducts electricity will dissipate heat. The more current that flows, the more heat is dissipated, the…
Demystifying Electromagnetics, Part 9 - Skin Effect October 13, 2021 A conductor carrying an AC current will tend to have the current bunched up at its periphery. Why and why…
Demystifying Electromagnetics, Part 3 - Magnets April 7, 2021 Why do magnets attract or repel and what's that got to do with conducting loops of wire? Peter and Petronella…

This article first appeared on the Siemens Digital Industries Software blog at https://blogs.sw.siemens.com/simulating-the-real-world/2015/03/05/angry-building-melts-car-with-focused-sunlight-weapon/