It’s National Engineer’s Week in the US this week. A similar event takes place in the UK in March. I’ve been lucky enough to have been an engineer (mechanical) for my entire career and long may it continue! However I didn’t start out enthusiastic about engineering at all. When I was young I never really had an interest in renovating cars, fixing engines or taking things apart generally. I was best at mathematics and physics which was why I defaulted to studying mechanical engineering at university. It was there that my love of a specific type of picture drove my love of the subject. 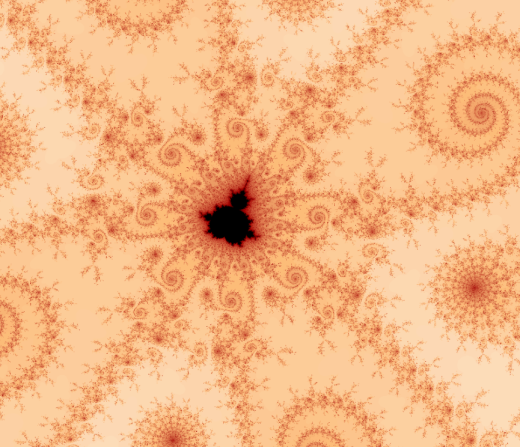 Brunel was the most famous of Victorian engineers. Designer of bridges, railways and big big ships, the University that bears his name lies just to the west of London. 1988 was a good time to start at Brunel. At that point it was still fully government funded so we did have certain freedoms not enjoyed today. It was in my first year that I first saw a fractal, a real ‘wow’ moment. I was keen to find out more.

Mathematics is to Engineering as words are to poetry. Understanding the math(s) behind how a fractal is generated was a revelation. So much complexity, at an infinite number of scales, from the simplest of non-linear relationships. The universe’s artwork indeed. Spurred on to find out more I next came across the Lorenz attractor.

In 1963 Ed Lorenz published his seminal paper “Deterministic nonperiodic flow. Journal of Atmospheric Sciences. Vol.20 : 130—141″. The butterfly effect was a term coined from it. Put simply, a (non-linear) mathematical model that intended to predict global weather patterns was found to be sensitive to initial conditions. Start two simulations with very very slightly different starting points and the two solutions will, after a while, deviate widely from each other. How fascinating and fundamental is that!

When I did specialise in fluid dynamics during my final couple of years at Brunel I was naturally motivated to understand the concepts behind Lorenz’ study. Unlike some of my fellow students I couldn’t wait to find out about boundary layer theory, turbulence, turbulence modelling and computational fluid dynamics (CFD). Once I had enough theory, I did study Lorenz’ paper in detail. His model was akin to a Rayleigh-Bernard convection configuration, hot floor, cold ceiling, the air circulates between the two, hot air rises, colder air sinks back down. The Lorenz attractor is simply a graphical representation of state of those convection cells, their rotational rate, the temperature difference across them. For some more extreme temp differences between hot floor and cold ceiling those convection cells spin one way, then spin another, in an a-periodic way. That point flying round the attractor NEVER crosses its own path, the system is random, chaotic and ultimately unpredictable. The displayed animated CFD simulation of such a convection can be considered as a single point on the attractor. It’s purely coincidental that the attractor and convection cells look somewhat similar!

After uni, infused with a love of CFD, I was extremely fortunate to go work for Flomerics, a UK CFD software vendor focusing on simulating HVAC and electronics thermal applications. I’ve been there ever since (now part of Mentor Graphics). Developing and demonstrating the value of CFD, surely engineering jobs don’t get much better than this!

There are no stereotypes in engineering. You don’t have to be into cars to excel in mechanical engineering, into stripping down radios to be a brilliant electrical engineer. All you need is a good grounding in math(s) and a love and enthusiasm for understanding the world around you.

Thermal Influence on Maximum Current Carrying Capacity January 20, 2021 Superconductors aside, anything that conducts electricity will dissipate heat. The more current that flows, the more heat is dissipated, the…
Flow Visualization and the Beauty of the Vortex Dome January 14, 2021 Fluids tend to be transparent, which is problematic for flow visualization. Rheoscopic fluids get round this by seeding the flow…
Chaotic Fluid Dynamics Part 4 - Finding Feigenbaum January 4, 2021 A 29 year old ambition finally achieved with the help of Simcenter FLOEFD for NX!

This article first appeared on the Siemens Digital Industries Software blog at https://blogs.sw.siemens.com/simulating-the-real-world/2015/02/24/engineering-love/