So it took a couple of hours to heat (a point in) the water tank to 60degC. As sure as eggs those Joules aren’t going to hang around. They will leak out and in their wake they will  leave the water at the same temperature as the ambient in which the water tank sits. Let’s take a qualitative look at how insulation surrounding the tank plays a role in delaying the inevitable.

I personally don’t have a material thermal conductivity tester to hand (but sure, we do offer one in the form of our DynTIM). So far in this study I’ve assumed the insulation on my tank is expanded polyurethane type foam with a very low conductivity of 0.03 W/mK, that’s about 6000 times better at keeping the heat in compared to Aluminium. What if it wasn’t as good an insulator? What if it was say, 0.24 W/mK about that of cotton. Let’s compare and contrast how the heat leaves and the water cools when using these different insulation materials. Good insulation on the left, not so good on the right, the temp range is from 25 to 62 degC. The simulation simply carried on from the end of the warm-up, but with the power to the heater element turned off and the resulting change in temperature simulated over the next 10 hours:

The water at the top of the boiler certainly remains hotter for longer which is why the hot water extract pipe is always higher up in the tank. Seen even more clearly if we look at how the volume of water that is greater than (an arbitrary) 54.5 degC shrinks over that time: 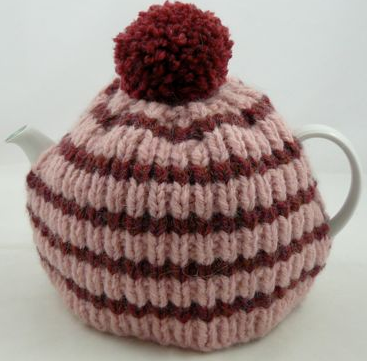 So, from a design perspective, having understood where the heat is leaving you could consider investigating shifting some of the insulation to the top of the tank, where the energy in the hot water tends to gather. There’s always room for improvement. Actually not always, a tea pot with a tea cosy on is as perfect an insulated object as you’ll ever find and although it might be improved from a thermal perspective, its quintessential Britishness is timeless 🙂

This article first appeared on the Siemens Digital Industries Software blog at https://blogs.sw.siemens.com/simulating-the-real-world/2015/01/09/domestic-hot-water-heating-wat-er-waste-of-energy-part-3-cool-down/