Lighting accounts for ~20% of the world’s total energy consumption. This is a staggering statistic. Why so much? Historically a lot of energy had to be consumed to produce the required amount of visible light. Incandescent bulbs, where electric current is used to heat a metal filament, resulted in most of the energy being dissipated as heat. More a hot bulb than a light bulb. Even worse for a candle. LEDs mark a step change in the efficiency by which energy is converted into light, they’re cooler as a consequence and thus more reliable. Win/win/win. Their ubiquity today is due to the breakthrough in creating an LED capable of emitting blue light (red and green having already been achieved). With the ability to create those 3 colours, they could be combined to produce white and all colours in between. The 2014 Nobel prize in Physics was awarded to 3 scientists who ‘invented’ the blue LED in the 1990s, despite the fact that a 1974 US patent indicates otherwise.

A Lumen (lm) is a measure of the energy contained in that part of the EM spectrum that your eye can sense, the visible spectrum. A luminous ‘efficiacy’ of radiation is a measure of how much visible light power there is compared to the power in all frequencies of the light. More the better. LEDs are on their way to becoming x1000 better than historic forms of lighting:

Ironically, LEDs perform better if they are cooler. At higher (junction) temperatures the brightness decreases, the emitted frequency shifts and the reliability is compromised as well. Good thermal management, in terms of the physical characterisation of their optical and thermal properties as well as a simulation based design methodology, is essential. The LED vendor market is coalescing through acquisition, maintaining a competitive product edge is as important as it ever was. Such thermo-optical applications are a real sweet spot for the technology in the Mechanical Analysis Division of Mentor Graphics. The MCAD embedded CFD technology of FloEFD coupled with the T3Ster and TeraLED physical test and measurement equipment is especially well suited to automotive lighting applications where the use of LEDs is now commonplace. 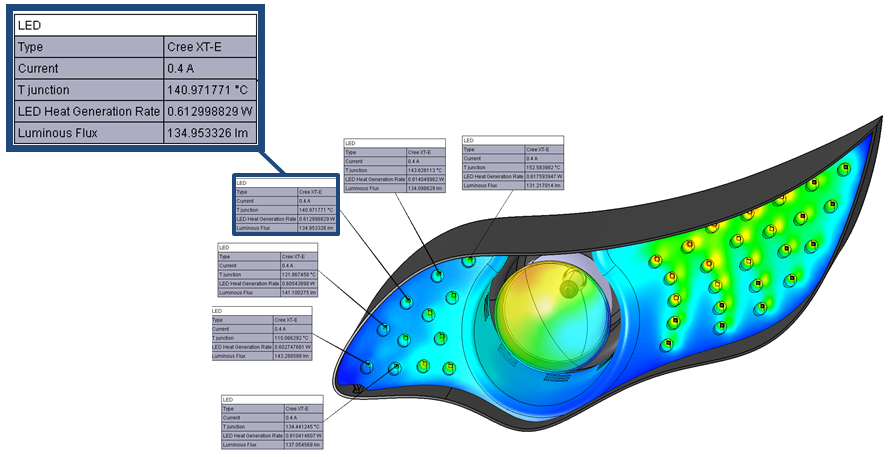 An interface between T3Ster and FloEFD enables temperature dependent LED optical properties, measured by TeraLED, to be imported into FloEFD whereupon a ‘hot lumen’ prediction can be simulated based on a specified driving current. That, coupled with a choice of 3 optical radiation models in FloEFD and the ability to handle complex MCAD assemblies directly within the MCAD environment, make for a unrivalled industrial strength capability.

One of the authors of the overlooked 1974 US patent “Gallium nitride metal-semiconductor junction light emitting diode“ was Wally Rhines, CEO of Mentor Graphics. Wally is one of those rare captivating keynote speakers who can take you on a roller-coaster of a ride into the world of EDA and deposit you at the end feeling intrigued yet satisfied. It would have been cool to have a Nobel Laureate as CEO. It’s a bit of a shame it didn’t work out that way this time.

p.s. Wally’s not only a keynote speaker of course, his CEO track record at Mentor speaks for itself. Thought I’d clarify that in case he stumbles on this blog… 🙂

Flow Visualization and the Beauty of the Vortex Dome January 14, 2021 Fluids tend to be transparent, which is problematic for flow visualization. Rheoscopic fluids get round this by seeding the flow…
Demystifying Electromagnetics, Part 4 – Inductors May 26, 2021 Welcome to Part 4 in this blog series that hopes to demystify electromagnetics for those of you who might have…
Thermal Influence on Maximum Current Carrying Capacity January 20, 2021 Superconductors aside, anything that conducts electricity will dissipate heat. The more current that flows, the more heat is dissipated, the…

This article first appeared on the Siemens Digital Industries Software blog at https://blogs.sw.siemens.com/simulating-the-real-world/2014/10/21/blue-leds-since-when-is-improvement-invention/