Electronic products, and products that contain electronics, are typified by being constructed of 100s if not 1000s of individual parts. A CPU alone is the most complex manufactured product on earth as demonstrated in this excellent picture story on Tom’s Hardware. From the IC through package, PCB and chassis, items are glued, cured, soldered, screwed and assembled into the myriad of products that run through every aspect of modern life. Engineering in all its forms is driving humanity forward into a future that will be as glorious as it will be inevitable and will one day see us burst out from our planet and on to a galactic diaspora. A future far flung from FloTHERM V10’s much enhanced ‘find’ capability 🙂

FloTHERM comes into its own when dealing with industrial strength, multi part assembly 3D thermal simulation models of electronic products. The robust technology on which it’s based, not only in terms of it’s CFD but more on how the internal ‘book keeping’ of model data is dealt with, enables FloTHERM’s thermal engineering users to predict operating temperatures quickly. Such a thermal simulation model is constructed from data from various engineering disciplines; PCB data from EDA tools such as Mentor’s Xpedition® xPCB Layout, chassis/heatsink data from MCAD tools, component thermal data from spec sheets or direct from suppliers plus a whole bunch of manually defined data and behavioural attributes etc. Ensuring that the model has been defined correctly before committing to producing simulation results (a process that, for real complex models, can take a few hours) is a key aspect in the usage of FloTHERM. 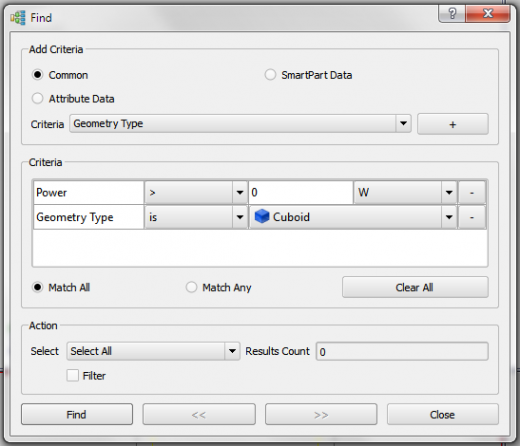 The humble [Edit/Find] feature is indispensable when it comes to ‘debugging’ a model. Making sure that no data has been missed, data values entered are what are intended, identifying any mistakes that might have been made in the model set-up can save lots of time compared to running a simulation only to find that you have to correct and re-run again.

The enhanced [Edit/Find] in V10 allows for any data that has been used to define an object, or any attribute data attached to an object (such as power or material thermal conductivity), to be used as part of a search query. This allows objects that satisfy that search criteria to be automatically identified and selected. A common enough feature in email tools and such but vital for 3D simulation pre-processing.

The example shown on here will select all dissipating Cuboid objects in a model, enabling you to check that the right objects are dissipating heat. Many other useful examples can be considered:

Once those objects are selected, either all together or cycle selected one by one, their data can be viewed, confirmed or changed. To make it even easier to debug just those objects, a filter options allows only those objects to be shown in the main model node tree.

It is often what initially appear to be the more trivial of features that are the ones that offer the most value and productivity. All engineering tools will play a part in the progress of humanity, even the humble [Edit/Find], cntrl-f for short.

This article first appeared on the Siemens Digital Industries Software blog at https://blogs.sw.siemens.com/simulating-the-real-world/2014/02/25/top-10-flotherm-v10-features-2-advanced-find/