Effective use of a Computational Fluid Dynamics (CFD) simulation tool requires at least a working knowledge of fluid dynamics itself. Tools alone don’t make for a good engineer. When interviewing for jobs within the Mechanical Analysis Division (and way back into Flomerics days too) a common question posed to tease out such an understanding is to describe the air flow patterns in and around a radiator placed under a cold window. The range of answers we’ve heard over the years has been quite outstanding. 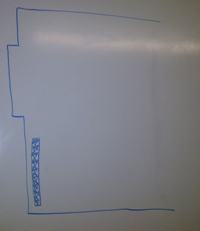 As if interviews weren’t stressful enough, being faced with a whiteboard and a sketched out cross section of a room, recessed window and water heated radiator seen out of the corner of your eye whilst handshakes are going on is always a slightly unnerving way to start. That’s the point though, an applications engineer going to visit a prospect to introduce the power and value of our CFD tools needs to be able to quickly understand the design challenge that the prospect is facing and apply their good understanding of fluid dynamics to demonstrate how our tools can help. Seeing how you respond to a similar situation during an interview is a good indicator.

There are various ways in which fluids behave under various conditions. The most basic is that hot air rises. Not as simple as it sounds. What does ‘hot’ mean? A sealed well insulated box containing air at a uniform toasty 200 degC won’t move around at all. It should be ‘hotter’ air rises. It’s actually density differences that give rise to forces which induce the air to move. Hotter air is less dense than its neighbouring colder air and so the two will pull apart due to gravitational attraction.

You don’t often see air movement what with air being all transparent and such. Add some contaminant then sure, easy to see. That’s why most smokers are surprisingly familiar with laminar to turbulent transitional flows and Grashof numbers, even if they’re not consciously aware of it. At the very least you’d expect hot air around the radiator to go upwards. So, when asked to draw the air flow patterns in and around the radiator, it’s surprising how often we see the interviewee answer with this: 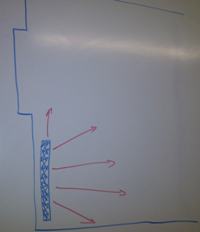 A good description of the radiative heat transfer from the radiator but falling somewhere short of a definition of the air flow around it. Maybe the name ‘radiator’ sets up some mental assumptions in the mind of the interviewee; …a radiator heats things up, by radiation of course, I’ve just been asked to draw something on the board to do with a radiator, I’ll draw the, what would they be… radiation vectors, smile, nod confidently, put the pen back on the table, sit down with a straight back and await the next question.

It’s a fair point. Why go on about air flow when talking about a radiator? How does the heat from the radiator get out to the room? It doesn’t really connect to anything so it can’t be by conduction. That just leaves convection and radiation as the two other modes of heat transfer. The assumption in the naming has been that it’s all by the latter. Wonder how much of the total heat loss leaves by each? Well wonder no more, FloVENT has the answer:

39% by convection, 61% by radiation. Maybe radiator isn’t the best name for it. How about something that relates to its overall behaviour; a ‘convectoradiator’? a ‘Conrad’? 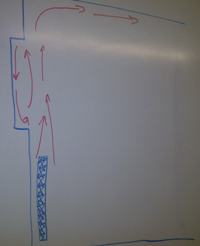 So, the accepted right answer is shown here. Hot air going up, cold air coming down from the window but being forced to wrap around by the conrad plume (already it feels like a better name!). Last week someone was interviewed here in the UK and said, when asked this standard question:

“O yes, I saw a Mentor blog about that”

“So do you know the answer”

If you have read this far then good luck with your interview. Apply now!

One thought about “Where’s the Best Place to Put a Radiator in a Room? Part 5: Get a Job”

This article first appeared on the Siemens Digital Industries Software blog at https://blogs.sw.siemens.com/simulating-the-real-world/2012/08/16/wheres-the-best-place-to-put-a-radiator-in-a-room-part-5-get-a-job/