Conventional wisdom has it that the best place to put a radiator in a room is under the window. However, there’s nothing conventional about wisdom and one should be obliged to question and verify those facts that we take for granted. CFD and its ability to predict air flow and heat transfer offers an unrivalled efficient method to study such applications. Using the concept of PPD (percentage people dissatisfied) we can compare and contrast differing radiator configurations using simulation, bypassing the need for a) plumbers and b) a tolerance of plumbers.

I love CFD and not just the colourful pictures it produces. The ability to predict and therefore manipulate the world around us has paid dividends in terms of the evolution and success of our species. CFD takes us forward in this ability (though not fast enough if you look at present day challenges of weather prediction). A few mouse clicks in FloVENT‘s simple to use CAD interface (think Lego as opposed to sculpting) and you can quickly create variations on a model. Let’s put the radiator under the window, on a side wall and on the opposite wall. 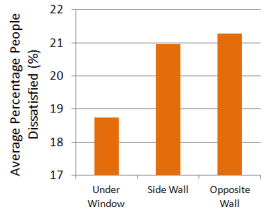 To come up with a single metric to compare the configurations let’s use the average PPD at all points in the room to give an indication of, regardless of where they stand, the % of people that would be dissatisfied with thermal comfort in that space. The graph is conventionally wise. It’s 13% better to have the radiator placed under the window; for this room configuration, for this radiator size, for such a window, for such external temperature conditions etc. etc. There’s not much to be had by placing it on the side wall either.

So often the application of simulation ends at verification, an indication of what a system does and whether it’s acceptable. The wealth of physics predicted by CFD gives the opportunity to not only observe predicted behaviour but to understand the reasons why, why it’s doing what it’s doing. It’s the level of understanding that takes an engineer from being a competent simulator to a good designer. 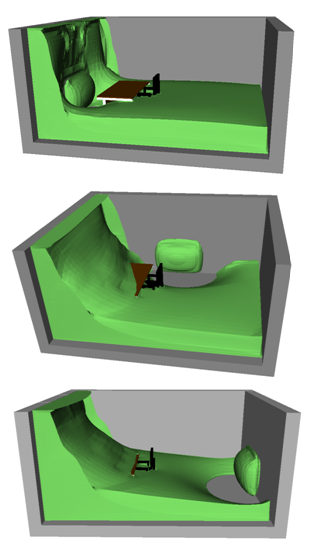 Looking at the distribution of PPD in the rooms we can gain insight into where there is a larger volume of dissatisfaction. The images to the right show an ‘iso-surface’ of PPD at a value of 25%. So more than 25% of people residing anywhere ‘under’ that iso-surface blanket will be dissatisfied with their thermal comfort.

When the radiator is not placed under the window there is a large area of dissatisfaction in that side of the room. The air experiences no resistance as it falls cold due to (negative) buoyancy from the window and that whole outer wall.

This best configuration still leads to over 18.5% of people not happy in general. Suffice to say that regardless of location of the radiator (apart from in its immediate vicinity), the lower portion of the room is invariably uncomfortable. A -ve PMV value indicating that it’s always too cold down there.

The use of underfloor insulation or maybe underfloor heating would have been a better method of achieving a higher % of happy people. An expensive option for a retrofit though. Easiest option would be just to make the radiator bigger and, with a complete absence of plumbers, that’s what we’ll look at next time.

This article first appeared on the Siemens Digital Industries Software blog at https://blogs.sw.siemens.com/simulating-the-real-world/2012/07/31/wheres-the-best-place-to-put-a-radiator-in-a-room-part-3-13-better/