With the gulf stream having shifted south and now flowing happily somewhere high over Paris, the summer weather in the UK has been ‘unseasonably’ (literally) wet and miserable. People’s heating has been thermostatically popping back on all over the country which for July is unheard of. So with this as the background and in the context of a stagnating world economy, ever continuing civil strife in the middle east and the forthcoming Mayan end of the world I thought now would be as good a time as any to look into the all important question of where best to place a radiator in a room. Such things are important.

Not everyone on our planet needs heating to remain comfortable indoors. Generally the northern hemisphere is cooler than the south and sure, it varies over the year. Click this image to see a typical annual global air temperature animation: 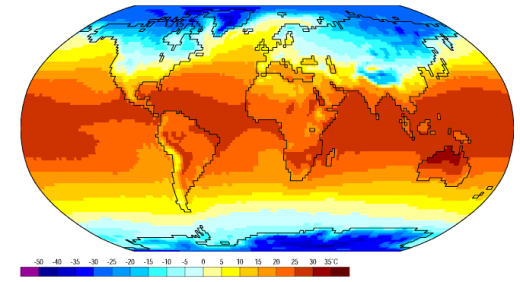 Southern California, Florida, Italy, Spain all look comfortably appealing! You’ll need to heat or cool your house if the outside temperature is cooler or hotter (respectively) than you’d like the temperature to be inside. Which begs the question what temperature would you feel comfortable in? 20degC (68degF) is the simple answer though as we’ll find out in later parts to this blog you need to look at more than just air temperature to gauge comfort.

Let’s focus on room heating. To maintain a desired internal room temperature you have to add heat into that space. That heat will seep/leak/flow/pass* (*delete according to your analogy liking) to the cooler outside. The potential difference in outside vs. inside temperatures will be related to the ease by which the heat passes from hot to cold and also to the amount of heat you add. Leaving aside radiative and conductive heat transfer, convective heat transfer (air moving cold or hot about) is central to the effect that a radiator has on the temperature distribution in the room. Hot air rises. Actually, it should be ‘hotter air rises’. A radiator will add heat to the air which will increase its temperature, reduce its density relative to the colder air around it and rise upwards as a consequence. Using the power of CFD simulation using FloVENT let’s have a look to see what’s going on. Oh, o, nice warm air moving towards the ceiling. Buoyancy, friend to the swimmer, bane to those tasked with heating a space.

As hotter air rises so must colder air drop. What would cool the air in a room? An outside wall and especially a window. In these triple glazing days the ability of a window at letting cold into a room is not as severe as it once was but does serve a good demonstrative purpose. Let’s remove the radiator and introduce a window (gotta love the freedom virtual prototyping gives). The cold air drops straight to the floor and along it in a not so nice foot level draft. Socks and slippers time and a complete lack of lazing cats.

To get a feel of the interplay between these ying and yang thermal warriors let’s put the radiator back and check out the resulting hot and cold air flow patterns:

Wow, somewhat complex. Even the simplest of configurations can give rise to very involved interacting 3D airflow patterns. Just as well air in reality is see through otherwise we’d be walking round in a dazed state of wonderment all the time. The cold air is kind of trapped in the window recess by the hot air coming up from the radiator. Not all of it though, some leaks out the edges of the sill.

All well and good but let’s get back to what we’re trying to find out; the best place for a radiator. Next time we’ll discuss what we mean by best. Unless we get a handle on that our investigations will be meandering… at best!

6 thoughts about “Where’s the Best Place to Put a Radiator in a Room. Part 1: Such Things are Important”

This article first appeared on the Siemens Digital Industries Software blog at https://blogs.sw.siemens.com/simulating-the-real-world/2012/07/12/wheres-the-best-place-to-put-a-radiator-in-a-room-part-1-such-things-are-important/