It’s estimated that, from a figure of 0.4% in 1995, now about 30% of the world’s population are ‘internet users’. Not sure exactly what being a ‘user’ entails; looking at a web page? clicking a link? sending an email? Probably the latter considering how many I receive. The Romans used little wax or wooden tablets, the Victorians introduced a penny-post system, today we command photons and electrons to do our communication bidding. Goodness knows what the future holds but knowing our luck it’s highly unlikely that it will address the quality and relevance of what is transmitted.

It was only slightly ironic that, using the internet, I used Google to google ‘how does the internet work?’.  I knew that it had something to do with cod-pieces or packets or some such. From a hardware perspective though it’s all about routers, switches and bridges. Lots of PCBs in boxes, racks, cabinets with lots of cables and masts connecting them together with our beloved phones, PCs, iP#ds etc.

Most of the hardware remains out of site, sometimes you can catch a glimpse of a base station sitting by the side of the motorway/highway/autobahn (and sure, without fully appreciating the distinction between mobile telephony infrastructure and that of the internet I’m going to just plough right on ahead here). It’s good to see that the masts that accompany the base station are now often disguised as trees here in the UK. It’s the highlight of my day when driving to work on the M4 trying to spy the tree mast between junctions 12 and 13. Actually, tell a lie, the highlight of my day is actually getting to work. Of course.

A lot of energy is used to push those electrons around our internet, quite a bit of which ends up dissipated as heat which gets things hot. Too hot and the hardware slows down and/or stops working. Just as well FloTHERM is used by so many major players in the telecommunications industry to virtually prototype their designs from a thermal performance perspective. Ensuring their products run as fast as they were designed and for as long as they were designed to do so. 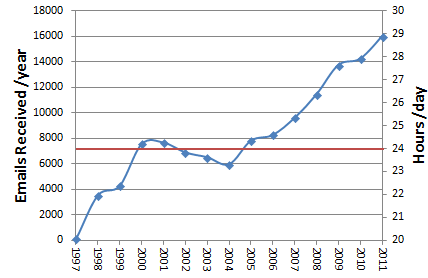 I’ve hoarded pretty much every email I’ve ever received from 1997 onwards. With each new year I do some email housework, categorising those received in the last year into various folders etc. This year I decided to graph the increase in received emails in that time as each year I find more and more of my time is spent staring at my inbox wondering why it doesn’t get smaller (maybe less staring and more responding is in order…).

Don’t know what happened between 2000 and 2005, whatever it was it didn’t last. As you can see there has not been an equivalent increase in the time available to digest all that correspondence. So, here’s a heart felt plea to those other product managers and marketing departments out there. Please, O please hurry up and provide a time dilation product that doesn’t involve travelling at near light speeds.

Next time you pass a nondescript cabinet or cabin by the side of the road, spare a thought for what’s inside, what it’s doing, who designed it and how. Without it you wouldn’t have your email to look forward to and how on earth could you function then?

Chaotic Fluid Dynamics Part 1 - Rabbits December 8, 2020 A person walks into a bar and asks the bartender "what's the difference between period doubling routes to turbulence and…
Thermal Influence on Maximum Current Carrying Capacity January 20, 2021 Superconductors aside, anything that conducts electricity will dissipate heat. The more current that flows, the more heat is dissipated, the…
Demystifying Electromagnetics, Part 3 - Magnets April 7, 2021 Why do magnets attract or repel and what's that got to do with conducting loops of wire? Peter and Petronella…

One thought about “Emails, more Emails and Jeff Bridges”

This article first appeared on the Siemens Digital Industries Software blog at https://blogs.sw.siemens.com/simulating-the-real-world/2012/01/09/emails-more-emails-and-jeff-bridges/