It would only have cost me an extra £170, a small extra compared to the cost of the rest of the build, but I decided against laying thermal insulation boards directly under the underfloor electric heating mats. Surely better to leak some of the heat down to heat the 100mm thick concrete screed which would maintain its heat through those cold winter weeks, giving thermal support to the heating mats in heating the room space above. I’d convinced myself that that would be the case. Penny wise but pound foolish. I should have thermally simulated my assumptions before hand.

When constructing a simulation model one has to determine the extents of that model. The demarcation between what you intend to simulate and what you will assume. From a heat flow perspective this normally translates into an ‘inside’ that is modelled explicitly and an ‘outside’ that isn’t modelled, rather its effects imposed by some ‘boundary condition’ (BC), an apt phrase if ever there was one. From an electronics cooling perspective there are well defined levels where such BCs can be readily imposed. The same is true from an HVAC perspective, one of the best posed interfaces lies between the built environment and mother nature outside. To determine the effectiveness of undermat thermal insulation I opted to build a simple model of a single room in FloTHERM (though I could have done the same in FloVENT) to investigate the power consumption requirements of the heating mat during seasonal external variations. 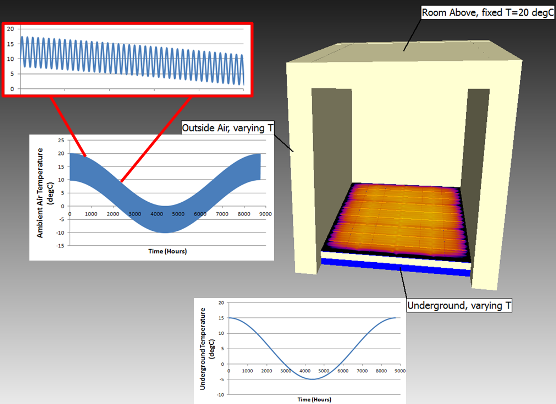 In reality the heating mat is thermostatically controlled, allowing different setpoints to be defined at differing times of the day. The expensive thermostat would have monitored both underfloor and air temperatures. I went for the cheap one that just monitored a point under the floor, between the cables. Instead of modelling the somewhat complex control system itself to determine the cable power dissipation as a function of monitored temperatures I bypassed that and went straight to the assumption that the control system was effectively maintaining the cable temperatures at the setpoint temperature. Power in -> Temperature out; Temperature in -> Power out; from a simulation perspective the equations can handle either method. So, with the cable temps fixed, a long scale transient simulation from the height of summer to the coldest day of winter allows me to see what the predicted power consumption is on that coldest day, both with and without a layer of 6mm thick insulation boards under the heating mat. 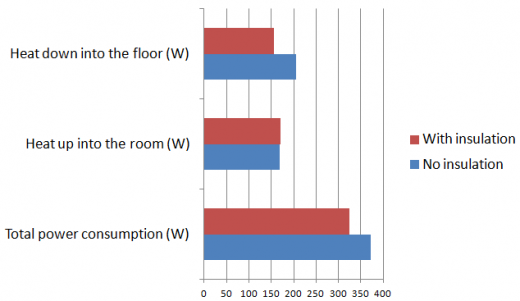 So I was wrong. Without the insulation the concrete screed sucks more power, 15% more to be precise. My assumption that the screed would have built up a storage of heat to lessen the power consumption requirements in the depths of winter were unfounded.

Both hindsight and simulation are wonderful things.

Thermal Influence on Maximum Current Carrying Capacity January 20, 2021 Superconductors aside, anything that conducts electricity will dissipate heat. The more current that flows, the more heat is dissipated, the…
Demystifying Electromagnetics, Part 1 - Fields and Analogies March 2, 2021 This blog series will strive to demystify (low frequency) EM by way of pictures and analogies, with as few equations…
Demystifying Electromagnetics, Part 5 - Ferromagnetic Cores June 14, 2021 A coil of wire creates a magnetic field when a current passes through it. The magnetic field is strongest in…

This article first appeared on the Siemens Digital Industries Software blog at https://blogs.sw.siemens.com/simulating-the-real-world/2011/10/18/underfloor-electric-heating-part-iii-penny-wise-pound-foolish/