I’m a big fan of product demonstrations. Having once been an application engineer, there’s nothing quite like the thrill of showing the use of a software like FloTHERM live in front of a prospect. Concentrating on highlighting the main features of the product whilst being bombarded with a barrage of questions about it is certainly a lesson in focus. At the Gadget Show live event mentioned in Part I my boys and I were lucky enough to witness a liquid nitrogen overclocking demonstration by Paul Watkinson. With one hand tipping a flask of the cold stuff into a CPU mounted copper pot and the other monitoring and once rebooting the motherboard, I was just glad of the thick perspex screen in front of Paul. Suffice to say the demo was cool!

The similarities between the automotive and PC industries don’t stop at aftermarket modding. Vin Diesel’s use of Nitrous Oxide in The Fast and the Furious is I suppose the automotive analog of liquid nitrogen cooled overclocking. Though whereas the former provides additional energy to the system, the latter is just as good as getting rid of it. However both are expensive and difficult to administer but are at the cutting edge of their respective fields.

No way do I profess to to know anything in detail about overclocking. Beyond controlling the CPU multiplier and the front side bus clock rate (or modern equivalent), the rest is magic jiggery-pokery. The increase in dissipated power is evident. The end effect is to increase the clock speed of the CPU (or other critical ICs), substantially. The downside is that the components tend to get very hot under such conditions to the extent where they first exhibit random failures in their functional processing capabilities and finally stop working, sometimes permanently. That is unless you can get the heat out pronto, reducing temperature rises above ambient and keeping your junction temperature below maximum rated values. An entire sub-culture of experts, aficionados and enthusiasts constantly strive to reach ever higher clock speeds via global well organised benchmarking competitions. There really is nothing like a group of pioneers to help push a technology to, and beyond, its limits. Vin Diesel and the entire electronics cooling world salute you! 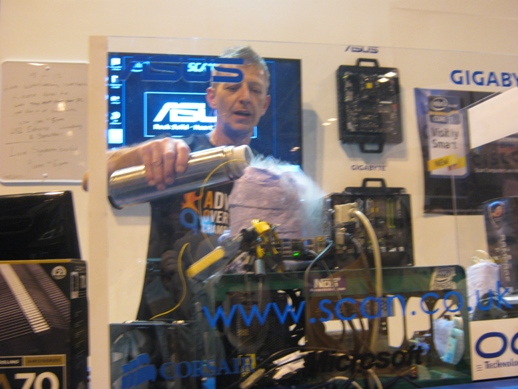 Paul (aka ‘Sacha35’) is a long time overclocker and a member of BenchTec UK, the UK’s no.1 overclocking team. His demonstration involved pouring the liquid nitrogen into the CPU mounted pot to reduce the temperature of the idle motherboard down to just above the cold lock temperature (the temperature at which the entire system shuts down). Then stress test software applications are run to push the CPU and verify that the mathematical operations it is performing have not become corrupted. Clockrates are then noted. 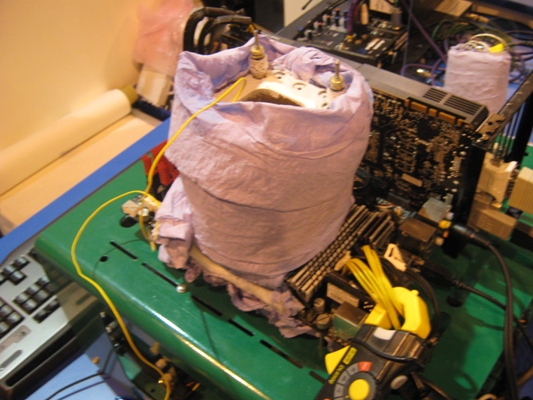 With the LN2 happily boiling away at -196 degC the temperatures of the motherboard happily go well below the dew point of the surrounding humid air causing a massive amount of condensation (yes, even Birmingham has moist air). Putty is used in and around the CPU and socket and the copper pot is shrouded in absorbent paper to soak up the moisture. Paul and a colleague overclocking is featured in this BBC article but it’s the following video done with Intel that really caught my eye:

Nice to see the automotive theme continue there… 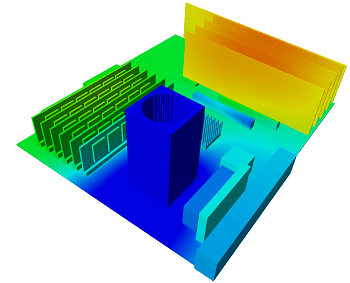 FloTHERM simulations do not suffer the risks associated with pouring liquid nitrogen. A pool of fixed temperature liquid is just that, fixed temperature as far as FloTHERM’s model definition is concerned. Such simulations can provide insights that are difficult if not impossible to glean experimentally. For example, what would the maximum power dissipation be when LN2 cooled and how might that relate to the maximum theoretical clock speed? More on that in Part III.

This article first appeared on the Siemens Digital Industries Software blog at https://blogs.sw.siemens.com/simulating-the-real-world/2011/06/06/pc-overclocking-and-aftermarket-modding-part-ii/