The futility of investigating the cooling effectiveness of any empty fridge is beginning to dawn on me, the irony of which is matched only by my new-years-resolution-inspired-sobriety. Never mind, let’s see this particular study through…  Whether in a beer ridden fury or in moments of Galilean scientific investigation, you might find yourself kicking the fridge over on to its side or even lifting it up and plonking it upside down. The door is tightly closed so why would the potential beercoolingosity in any way be affected? Let’s find out.

The main effect of this is to reduce the average air temperature. After a couple of assembly rotations and subsequent simulation conducted in FloTHERM, the following chart shows the effect of the rotations. 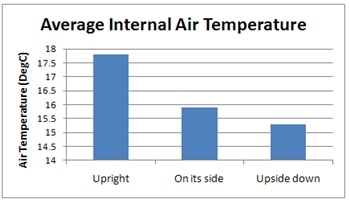 If you hail from the US, Burma or Liberia and thus do not officially use or mandate a metric system of units then you’d be more familiar with: 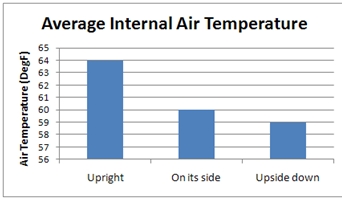 Either way, an empty electronic fridge sure doesn’t get that cold.

In a little more detail, here are the temperature variations within the fridge, as predicted by FloTHERM: 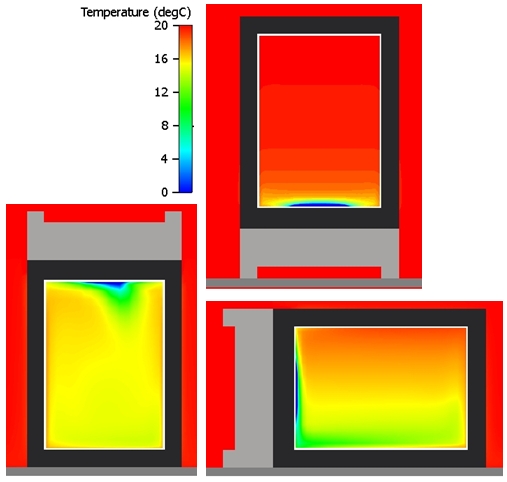 The mixing effects of the cold dumping air can be seen when you start to animate the airflow inside the fridge (note I’ve reduced the temperature range to go from 14 to 16 degC, blue is =<14, red is => 16 to clearly show the hot air (rising) and the cold air (sinking), note that the speeds are not to ‘scale’):

Think about the inverse of the problem; even my dog would intuitively know that putting a radiator on the ceiling would not be the best way to heat a room. There is more to product design than just thermal however. Simplicity leading to a reduction in manufacturing costs is going to be a biggie. The structural instability of having the heatsink, fan etc. on the top would maybe increase the risk of litigation. The point is is that such small fridges are not designed to be empty. Stock it full of beer cans and you might think it would not get as cold everywhere. You might have to think again…

Thermal Influence on Maximum Current Carrying Capacity January 20, 2021 Superconductors aside, anything that conducts electricity will dissipate heat. The more current that flows, the more heat is dissipated, the…
Demystifying Electromagnetics, Part 3 - Magnets April 7, 2021 Why do magnets attract or repel and what's that got to do with conducting loops of wire? Peter and Petronella…
Demystifying Electromagnetics, Part 1 - Fields and Analogies March 2, 2021 This blog series will strive to demystify (low frequency) EM by way of pictures and analogies, with as few equations…

4 thoughts about “Beer Fridge – A Case Study in Thermal Design. Part 3 – Side Up or Upside Down?”

This article first appeared on the Siemens Digital Industries Software blog at https://blogs.sw.siemens.com/simulating-the-real-world/2011/01/04/beer-fridge-a-case-study-in-thermal-design-part-3-side-up-or-upside-down/