On a recent trip to Japan I was surprised to find out how much their attitudes to smoking had changed. Cigarette prices have increased by over 30% in the last year and many public places now have smoking bans in force. For a country that has been renowned for its voracious attitude to smoking such a change in such a conservative culture is a bit of a shock. But as they say nowadays, “smoking is a dying habit”.

Not suffering the foppish liberalism of Europe, the Japanese come straight to the point if there’s a point to make. Here’s a public notice outside Sakuragicho station in Yokohama: 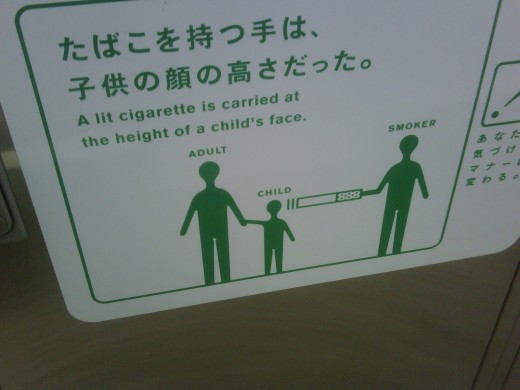 Look how evil smokers are. Such signage could insite a hatred and call to arms in less civilized nations. Part of the vilification of smokers is their banishment to smoking rooms. Forsaken spaces that act only as a punishment, often mirrored not to give the illusion of space but to provide a reflection on ones o so lost soul. Efforts are made to ventilate such spaces but are maybe designed with less care and concentration than for other applications such as hospital isolation rooms (well it can appear that way).

Designing the ventilation system for this and any other type of built environment is exactly what FloVENT was designed for. Based on computational fluid dynamics methods it can predict the 3D air flow, temperature and contaminant distribution within a wide range of built environments. Not that smokers deserve it but let’s say that a typical smoking room were to be simulated with FloVENT. First off a 3D model of the space is defined with representations of the room itself, the ventilation system and the occupants: 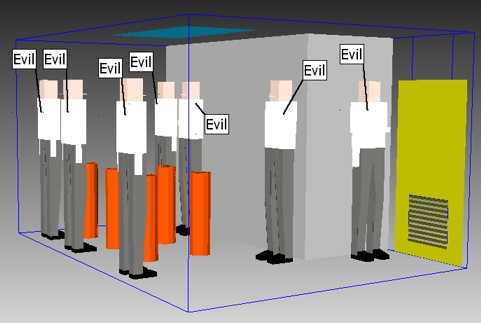 In this example there is a ceiling mounted extract and a louvred make-up vent in the door. Cigarettes are modelled with their ends at ~240 degC (Farenheit 451, thank you Mr. Bradbury for that one) and a source of smoke contaminant issued from the tip.

The resulting smoke distribution in the room can be visualised to gauge whether, in the occupied zone in the room, smoke levels would be considered excessive by the occupants. This can be done by plotting a surface that demarks the smoke levels that are considered acceptable (this in itself is a contentious value): 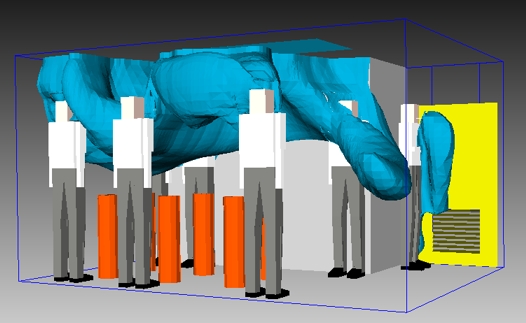 Everywhere ‘inside’ the blue bubble is too smoky, not good if your head is there. In terms of the air flow patterns these can be visualised by animation. Here’s where the clean air, induced through the make-up vent, travels within the room (coloured by smoke level, blue is clean, red is smoky):

Here is how the smoke, coming from the cigarette tips, convects around the room:

A good ventilation design would have the smoke being taken by the clean air right up to the ceiling mounted extract with no recirculation. This design is not so good in that respect. Spreading the clean make-up air by introducing it through more vents, at lower velocities so as not to jet in and stir things up would be something to aim for and something that can easily be investigated with FloVENT.

Suffice to say smokers don’t deserve such attention as they can indeed carry their cigarettes at the height of a child’s face and as such are evil.

Chaotic Fluid Dynamics Part 1 - Rabbits December 8, 2020 A person walks into a bar and asks the bartender "what's the difference between period doubling routes to turbulence and…
Demystifying Electromagnetics, Part 3 - Magnets April 7, 2021 Why do magnets attract or repel and what's that got to do with conducting loops of wire? Peter and Petronella…
Chaotic Fluid Dynamics Part 2 – Butterflies December 10, 2020 For want of a nail the shoe was lost. For want of a shoe the horse was lost. For want…

This article first appeared on the Siemens Digital Industries Software blog at https://blogs.sw.siemens.com/simulating-the-real-world/2010/10/29/on-the-vilification-of-smokers/