The internet is big. It’s not sentient yet, though Robert Swayer has written a compelling story of how it might ‘Wake‘. In fact it’s far from intelligent at all. Banal comments about “how we ever managed without it” will age so quickly that future historians will assume a typo, more intelligence than we currently have and take the phrase to have been “how did we ever manage with it”.

It looks like the internet search wars are hotting up with the launch of Bing by Microsoft, maybe the first serious competition to Google. Their ad campaign in the UK was competitively pointed to say the least. Information does not assure understanding which in turn puts intelligence one step further removed.

I had some fun with a search engine recently with it’s search suggestions it recommends as you type: 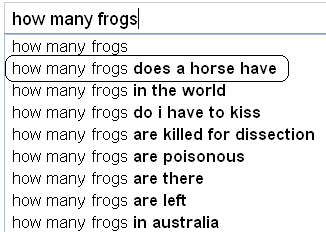 I can’t imagine that many people have searched for the highlighted string, maybe a developer has had some fun instead. Either way it made me laugh and has further assured my use of this particular engine.

The power of the internet to provide such capability so many users (~500million daily regulars apparently) is, despite its failings, immense. From an engineering perspective power is measured in Watts. Data centers consume a staggering number of them. Not all of them make their way to the actual IT equipment that provides all this functionality. Often as any Watts are used to cool the equipment as are used to drive it. With electricity bills that would make some smaller countries quake, the data center owner/operator would obviously like to minimise cooling costs. Good news is that we  in the Mechanical Analysis Division of Mentor Graphics provide a great software solution to simulate, investigate and verify data center cooling options prior to committing to them in operation. FloVENT has a proven track record in data center application. Check out this on-demand video for an introduction about the value FloVENT can provide when applied to data center cooling.

If you don’t want to take my word for it try one of the search engines, how about Ask Jeeves?

*** BREAKING NEWS: I have just found out that horses do indeed have frogs, though surely only the most fervent and uneducated of horsey people would want to know how many.***

Chaotic Fluid Dynamics Part 2 – Butterflies December 10, 2020 For want of a nail the shoe was lost. For want of a shoe the horse was lost. For want…
Demystifying Electromagnetics, Part 1 - Fields and Analogies March 2, 2021 This blog series will strive to demystify (low frequency) EM by way of pictures and analogies, with as few equations…
Chaotic Fluid Dynamics Part 1 - Rabbits December 8, 2020 A person walks into a bar and asks the bartender "what's the difference between period doubling routes to turbulence and…

This article first appeared on the Siemens Digital Industries Software blog at https://blogs.sw.siemens.com/simulating-the-real-world/2010/08/10/how-many-frogs-does-a-horse-have/