I like the fact that I can feel heat. I have always wondered if that’s why I found it more natural to gravitate towards mechanical engineering, not electrical. I suppose you can feel electricity but you wouldn’t really want to. As for feeling electromagnetic emissions/interference, forget it. In terms of thermal comfort in an otherwise cold environment, you’d like the local air temperature to be nice and warm, this is one way (convection) that you can get heated up by your local environment. The other way is by radiation.

“They don’t call them radiators for nothing, you know”

Not the best of descriptions but I’ll come on to that in a mo. Even though hot sir streams upwards from a wall mounted radiator, you can sit in front of it and feel your face warming up. That’s because your face is colder than the radiator and, due to that temperature difference, heat (Watts) leaves the surface of the radiator and lands on your face, the mechanism of energy transfer is via long-ish wave infrared electromagnetic radiation, travelling at the speed of light (am sure there’s some kind of thermodynamics pop song lyric in here somewhere).

Carrying on from the example used so far in this blog series let’s now include the additional effects of radiative transfer in the room, through the cavity and on to the outside. Looking at the proportion of heat coming from the radiator and making its way to the outside via the 3 modes of transfer allows you to know your enemy better, and design a better defence. 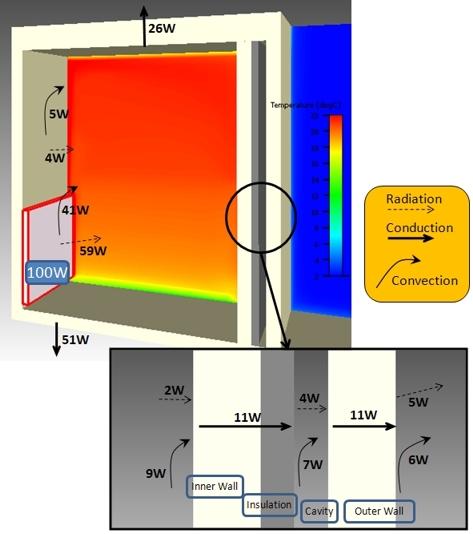 First thing to note, if the radiator was true to it’s name it would lose all it’s heat via radiation. In reality only about 60% of heat leaves via radiation, the rest does a great job of getting the air high up by the celing nice and warm via convection, good for ‘spider pig’ and tall people. So, it should be called a ‘convectiator’, hey, just as well I’m not in marketing…….Doh!

Heat is tricky, it goes this way and that, into a wall and back out again, up and down and sometimes back round on itself. The above figure shows just some of the heat flows that pass through some of the walls and surfaces. The vertical wall next to the radiator takes quite a lot of heat from the radiator itself, spreads it upwards and reintroduces it back to the room. This model, unlike my actual house, has rubbish underfloor thermal insulation, about half the heat you pay your hard earned ££ on heats the worms. Actually, heat WILL leave the room, you cant stop that, appreciating how and from where it leaves by analysing a FloVENT simulation in this way will help you to make better decisions such as “if I’m going to spend £100 (now about $3.5) on cutting down my energy bills, where best to make some changes”. Be it your house, a new build, a large retrofit you’re architectural consultant for etc. it is this type of understanding that simulation provides that is its real value. Out of the 100W being pumped into the room, only about 10% leaves the cavity wall, in its self an indication of either that it has a good thermal resistance or the fact that the other walls, floors and ceiling are proportionally much much worse.

If air moves really fast across a hot surface then convection will carry nearly all that heat away, radiation doesn’t get a look in. If the air is flowing much more slowly, such as in natural convection environments with air speeds < 0.5 m/s then radiation plays a much more important role. In the 50mm cavity with a low air speed radiation accounts for almost 1/2 of the total heat transfer from the inner insulation ot the outer wall. For the outerwall the proportion is slightly higher, not so much because the air speed is slow, more that the external air temperature is very low. 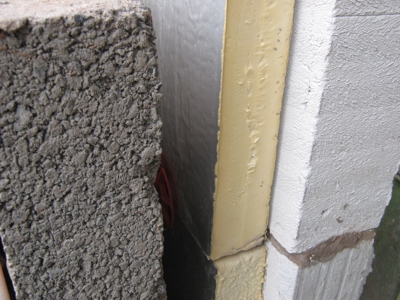 Making it difficult for the heat to leave the room will improve the thermal resistance, decrease the U-Value. How can you make it difficult for heat to leave via radiation? One way is to make one or both of the two faces that exchange heat by radiation be nice and shiny. Take the foil coverging on to foam 50mm insulation block (see left), as good at decreasing radiative transfer than at stopping moisture absorption. This decreases the emissivity, the shininess simply bounces the radiation back to where it came from. It ain’t no game of ping-pong, more that a status quo is achieved between the two surfaces, an agreement that, based on their own surface properties and the temperature of each one, one gives up some heat, the other receives it with radiative thanks.

Convection is the best for letting heat out, rather letting cold in. Gaps and cracks, even small ones, can allow a lot of heat to trickle away, rather a lot of cold to trickle in. Conservation, don’t you love it? More on that next time.

This article first appeared on the Siemens Digital Industries Software blog at https://blogs.sw.siemens.com/simulating-the-real-world/2010/03/12/how-much-do-u-value-good-thermal-insulation-part-vi-revenge-of-the-radiative-heat-flux/