It might well be that a single U-value is quoted, in reality though that single value describes the ease by which heat can pass through various stages, from an ‘inside’, passing through a ‘wall/window’ and going to the ‘outside’. The resistance (inverse of the ease, resistance = 1/ease) the heat experiences as it passes from the inside air to the inner solid surface of the wall construction (and from the outer surface to the outside air)  is due to the fact that air sticks to the solid surface. How strange is that? .

This so called ‘no-slip’ condition is due to the adhesion of the fluid molecules to a solid surface. What about if the surface was a smooth as a mirror? Nope, it still sticks I’m afraid. Air speed is zero at the surface but increases away from the wall to the free stream air speed. This region between the wall surface and the free stream air speed is called the ‘boundary layer’. It’s the thermal resistance of the internal and external boundary layers that can comprises the main contribution to the overall resistance and thus, although you can’t really do that much about it in terms of redesign (air will always stick) it’s useful to understand its nature. 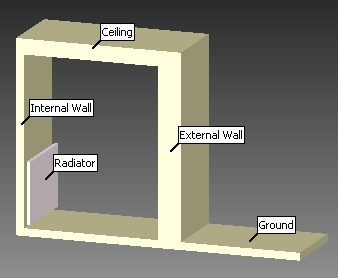 Let’s use FloVENT to setup a basic model of ‘slice’ of a room with hot radiator, walls and outside air. We’ll go for a full complex 3D model later in this blog.  FloVENT uses numerical techniques based on Computational Fluid Dynamics (CFD) to predict what the resulting air flow patterns and temperature distribution is. OK, this is a pretty ‘lite’ application of FloVENT, purely to demonstrate some HVAC theory. FloVENT’s capable of a whole lot more from cleanroom compliance to datacenter full room cooling there’s a whole bunch of stuff it can do.

With an assumed temperature of 2degC otuside (spring in England 😉 ) FloVENT predicts the room to be hotter, this is the least you’d expect from a CFD tool in terms of predictive accuracy… 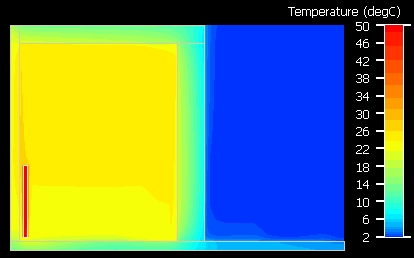 The air moves by natural convection, that it to say by buoyancy, there are no fans or air supply terminals. Hot air rises from the radiator, drops down the inside wall as it cools, its heat passes through the wall to the outside air that then picks up that heat and rises, again due to buoyancy.

Looking at the air flow ‘vectors’ up close shows the decrease in speed as the wall is approached: 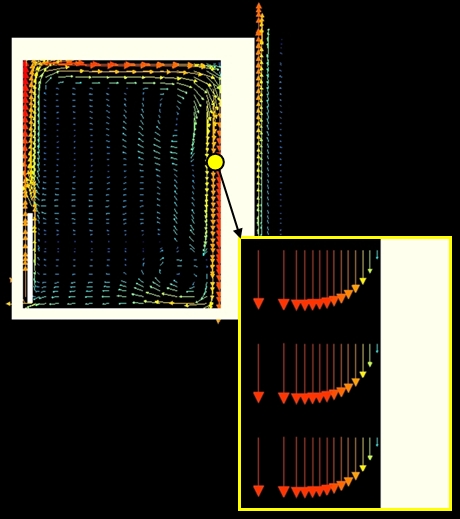 For thermal insulation air can be your best friend and worst enemy. Static air is a really good thermal insulator with a thermal conductivity of ~ 0.026 W/mK it’s about twice as good as glass wool matting and about 20 times better than brickwork. As soon as air starts moving though (as it does even when it gets a little hotter than it’s surroundings) it’s really good at getting rid of heat, as good as any solid material is at conducting the heat away. The boundary layer is a devil you have to live with, with inescapable stagnant air right next to the wall you have to look elsewhere to improve the thermal insulation, to reduce the U-value. Such as inside the wall itself, more on that next time…

This article first appeared on the Siemens Digital Industries Software blog at https://blogs.sw.siemens.com/simulating-the-real-world/2010/02/02/884/