I never trust a quoted value without having at least a little understanding as to what the value truly represents and how it was measured or derived. If you’ve ever felt inferior when someone quotes values or ranges of values at you take solace in the fact that there’s a fair chance they live on the surface of the pond of understanding and really don’t know how deep that pond is.

To see a value, be it U or otherwise, without units defined after it is kind of like going into a shop and asking: 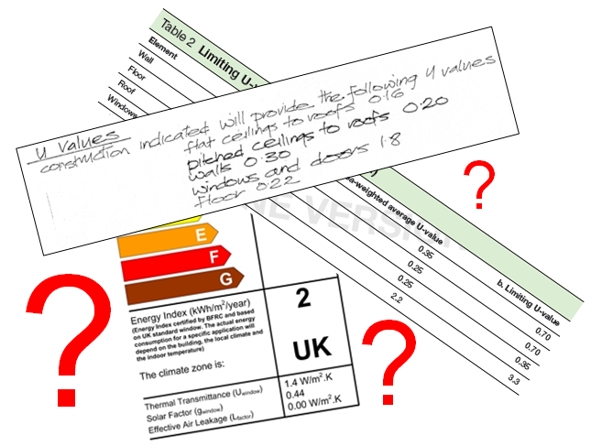 The units of U-value are, in SI:

(It’s only the US, Liberia and Berma who have not adopted SI as a national standard, I’m sticking with the vox populi here).

W is watts, SI unit of power. As an aside power is the amount of energy per time ‘flowing’ / ‘moving’. Energy is Joules (J), time is seconds (s) so a Watt is a J/s. The units of kWh, the thing you actually pay the electricity supplier for, comes out as Joules, more on that some other time.

I find it easiest to think of a U-value as:

Watts are baddies, they cost money, you’d like to not have many of those to acheve your nice comfy temperature rise up to internal room temperatures

m2 is a bit neutral, rather the surface area is just a matter of fact of how big say your house is or how big your windows are.

So, W/degC is the ‘ease’ by which heat can leave the inside of a building to the outside. If it’s big then loads of Watts can leave with only a small degC temperature rise from outside (cold) to just a little warmer inside. If it’s low then you only need a few Watts to achieve a big temperature rise from chilly outside to nice, warm and cosy inside.

So the U-value is the ease that the heat can leave a building over a given area. Low is good, high is bad.

More next time on how a U-value is actually a composite of a number of different resistances the Watts have to pass through on their route from the inside to the outside.

This article first appeared on the Siemens Digital Industries Software blog at https://blogs.sw.siemens.com/simulating-the-real-world/2010/01/29/how-much-do-u-value-good-thermal-insulation-part-i/