Heatsinks aren’t a novel energy efficient type of washing bowl, they are parts that are placed on high powered IC packages to help remove the heat more effectively and thus lower the operating temperature of the package which in turn increases reliability, can improve performance etc.  etc. Such approaches are observed in nature, from Elephants ears to the low sun apparent surface area of homo erectus. It could well be that the evolution of heatsinks also take a leaf out of nature’s book. Heatsinks are a complete misnomer. They don’t magically ‘sink’ heat away to some mystical parallel world (unless you believe Asimov’s “The Gods Themsleves”). Heat has continuum properties that are conserved, that is to say it can never be created or destroyed. It flows around using the 3 modess of heat transfer: 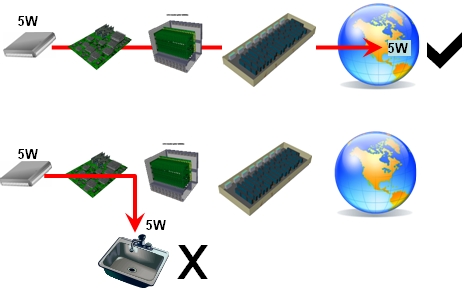 Heatsinks are much better described as ‘area extenders’ in that their main contribution to cooling is to bring the heat to a wider area for convective exchange to the air. Looking at it the other way round, air is really good at getting rid of the heat. Think of air as a ranks and ranks of taxis waiting to take the thermatrons out and away from the heat source. More surface area of heatsink = more space for the thermatrons to get into their own taxis and be whisked away to their cooling destination (e.g. England, any time of the year).

Here’s a typical heatsink used for cooling power electronic devices. The fins branch out to try to fill an available space with lots of solid-fluid surface area:

Branching, that’s the point. In very much taking a lead from Adrian Bejan’s superb book on the subject of constructal theory, nature has already shown the way to fill a space effectively. Trees are good at taking something from a point source (bottom of the trunk) and moving it to capitalise on a volume (of air). My botany days are far behind me but water, nutrients, O2 and CO2 are I think what are provided to/from the volume, O yeh, and sunlight. Heatsinks are similar in that they take heat from a point or plane and transfer that heat to a volume of air (or the heatsink takes the cold from the volume air and uses that to quench a point source of heat).

Leaving the obvious manufacturing constraints aside how long before we see this? Ages probably. Trees have evolved under omni-flow conditions, not having any symmetry and thus being equally effective for any flow direction through them. Pin fin heatsinks probably suffice under such flow conditions though I think nowadays air flow is designed in such that the flow direction will be known a-priori and an effective extruded heatsink selected.

Maybe the point is that in nature structures have evolved to support increased mass transfer or radiative transfer but not really for convective cooling. Animals and plants in nature tend to use evaporative phase change to shed unwanted heat. Be it a dog’s tongue or human perspiration, very high effective heat transfer coefficients can be realised. Bodes well for spray cooling then…

This article first appeared on the Siemens Digital Industries Software blog at https://blogs.sw.siemens.com/simulating-the-real-world/2010/01/19/heat-trees-taking-a-leaf-out-of-natures-book/