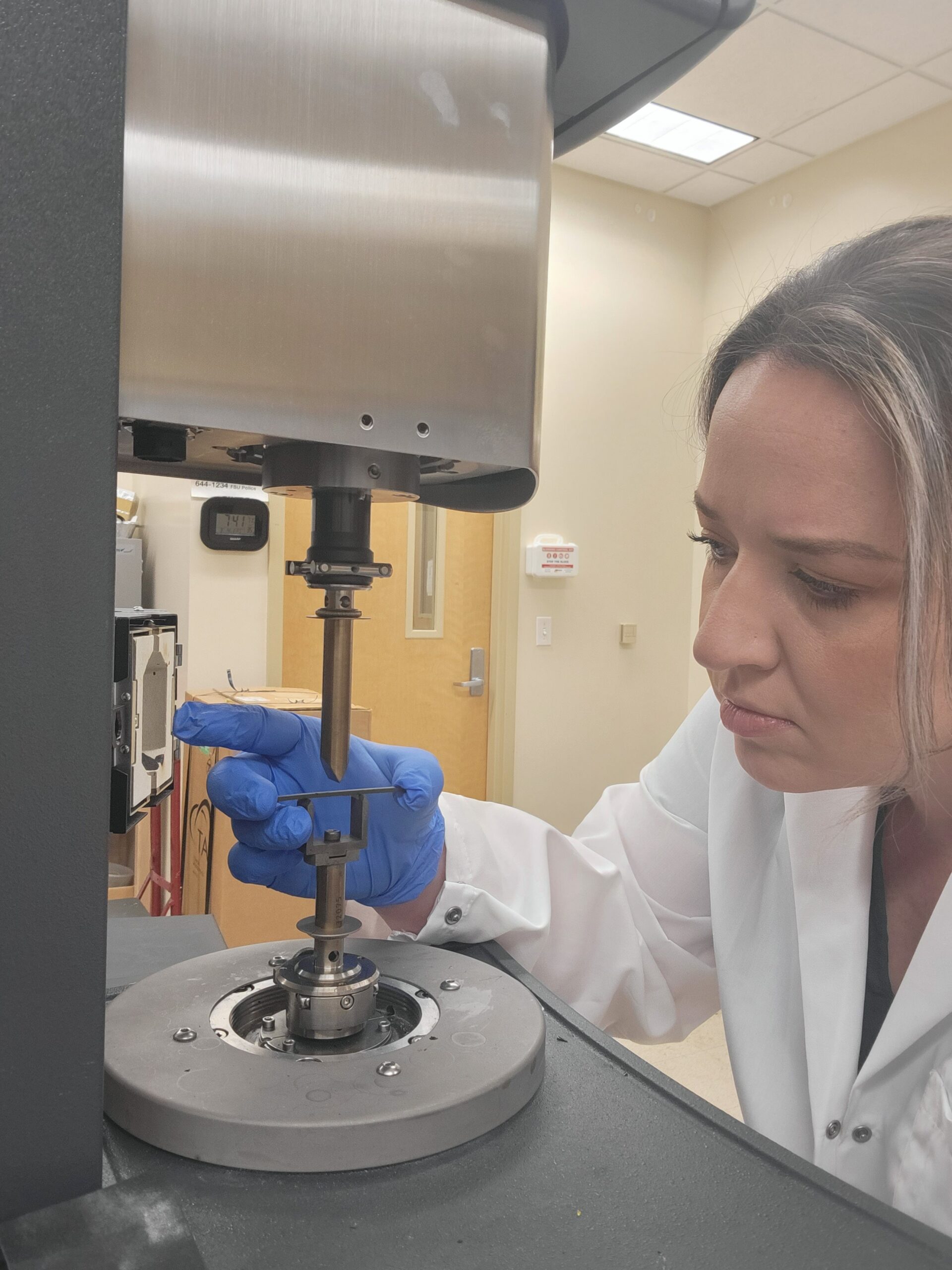 Did you know that International Women’s Day has been observed for over 100 years? While the 20th Century saw a significant improvement in women’s equality and rights, there is still much to be done to improve the gender balance in many fields of work. For example, according to UIS data, less than 30% of the world’s researchers in science, technology, engineering, and mathematics (STEM) are women.

International Women’s Day is held on March 8th every year. I will mark it by finding out about some of the great work that women are doing in STEM careers and how we will hopefully see even more of it in the future.

I was lucky enough to speak to Rebekah Sweat, Ph.D., Assistant Professor of Industrial and Manufacturing Engineering at the FAMU-FSU College of Engineering. It was a truly enlightening conversation. We covered her route into engineering, her hopes for the future of her field, and some incredible development one of her team has done with solar panels that could revolutionize the world.

First of all, can you tell me a bit about your background and what drew you to engineering?

I developed an interest in mathematics from an early age. The logic and the stream of intuition just make sense to me as a way of describing the world around us. After I did my first degree in mathematics, it felt like a natural step for me to move on to engineering. I could have moved on to actuarial science or statistics. However, I was more interested in the applied mathematics courses – using partial differential equations to explain the harmonics of bridges and other structures. I studied industrial and manufacturing engineering at graduate school. I then completed my Ph.D. in that area too, mostly working with materials and nanomaterial manufacturing.

Solvay, an advanced materials company funded my Ph.D. I worked for them for several years after graduating in their manufacturing and composites division before coming back to academia at FAMU-FSU College of Engineering.

During your mathematics and engineering studies, what was the gender split?

I’m not sure if it’s the case everywhere but when I was studying mathematics and statistics it was about a 50-50 split. But then when I moved onto engineering at graduate school it was very male-dominated, especially in manufacturing. I’d say it was about 80 or 90% male during that time.

That’s a really big difference! Why do you think there were less females studying in your area?

This is only conjecture, but I think there was a perception of engineering and manufacturing being a ‘dirty’ field that was less suitable for women. The reality is that with digitalization it’s actually become a more modern and cleaner field.

There was also a lack of female professors and leadership roles in this area. This probably didn’t help with that perception. But there has been a big change since then. We now have around 28% female students which is fairly high for engineering, but that wasn’t reflected in the faculty diversity. I’m now a Professor at the same institution where I studied and there’s been a real push to increase gender diversity.

Were you aware of the gender divide when you were studying, and did it concern you?

I was aware of it, but I wouldn’t say it concerned or hindered me. I’ve been lucky enough to have found many great male and female role models throughout my studies. Working in a male-dominated team has never bothered me. I’ve always wanted to work in a diverse field so I couldn’t help but notice that lack of diversity.

Now, when it comes to recruiting for my team, first and foremost I’m looking for like-minded individuals with who I think I can work well. However, I think it’s good to have some balance between male and female if possible. Currently, I have an equal split between men and women; 6 students who are a mix of graduate and undergraduate which is great.

Do you think female engineers bring something different to a field that’s been male dominated for so long?

Studies have shown that all diversity, not just in gender, produces more creative and well-rounded research efforts. So, when I’m recruiting, I look for a mix of different backgrounds and experiences. Currently, in my research group, I have two mechanical engineers, a chemical engineer, an industrial engineer focusing on statistics, and one student with a background in the cosmetics industry. Simply by having those different backgrounds they’re able to bring ideas that I couldn’t have. In terms of females specifically, I don’t want to stereotype but from what I’ve seen they tend to be better at communication. They’re more comfortable with presenting and more excited to share their work. This is really important when it comes to showing the value in what we’re doing.

What’s the most exciting thing about your job?

A lot of my research is in novel material discovery. I work with synthetic materials like nanotubes, nanoparticles, and different composites, mostly for applications in aerospace – commercial and military aircraft and space exploration. We work directly with the companies that make these materials, helping them to understand more about their capabilities. For example, until recently, it was unknown what the maximum temperature of boron nitride nanotubes is. But now we know because of the research my team has carried out.

This is really exciting to me because we’re uncovering new possibilities with these materials, helping the commercial relevance and applications. When it comes to space exploration you need multifunctional materials that can withstand the thermal stresses of leaving the atmosphere and also act as a radiation shield in space. And this is where modeling and simulation software comes in. We can try out different structures of these materials virtually before getting to the manufacturing process. Sometimes I can’t quite believe I get to do this every day!

Speaking of simulation, which tools do you use for that?

We mostly use Simcenter Multimech which allows us to directly embed microstructures into material simulation. I’ve been using it since I worked at Solvay. We tested about ten different software packages and Simcenter Multimech was the only one that could do everything we needed. We’ve now built up an academic partnership between our universities and Siemens as the tool is so important to our work. The great thing is we can communicate easily with the team at Siemens. They help us to write scripts to do new things with the software or even create new functionality that can be included in future releases for the wider community to use.

What’s the most interesting project your team is working on right now?

They’re all doing fantastic work. However, Melissa Davis is doing some groundbreaking work with solar energy. She comes from an electrical engineering background prior to her Ph.D. and works with perovskite solar cells. Solar energy is the future, but we’re currently limited by solar panels needing to be flat. If you bend them, they crack and lose their efficiency. Melissa wanted to use simulation to explore how we could make the material more flexible while remaining effective. This would allow us to put solar panels anywhere – on backpacks, clothes, beach towels, anything you can think of. She’s passionate about renewable energy and so she wants to do something that will make a real difference in that area.

So, I taught her the basics of simulation, built her a framework model with Simcenter Multimech and she’s run with it from there. She can easily simulate different materials to see what works best and was able to identify an interlay material that would stop the cracking. Then she went to the lab and made it, and it worked!

Most of this work has been done remotely during the pandemic too. Even with full access to the lab, it would take much longer to physically test all these different combinations of materials. The simulations allowed her to try all the different options at home before building the best ones once the lab was available.

There are some flexible solar cells already available, but Melissa is developing the next generation. These will be more efficient, more powerful and could really change the world in how we power our technology on a day-to-day basis.

And this is why I love my job so much. I’m not an expert in solar cells like Melissa is, but I was able to use my simulation experience to help her and now she’s producing something truly amazing.

That really does sound amazing! And it’s great to hear how women are changing the world in a previously male-dominated field. What do you think the future holds for women in manufacturing and engineering?

I’m really positive about it. The increased diversity at my college has proved successful and I’ve seen a similar push for change at other institutions. We’re starting to see more women in leadership and mentoring roles which should encourage the next generation of female engineers. Like I said, we’re able to create better science with increased diversity. So, the more diversity we have, both in gender and in other aspects of people’s backgrounds, the better ideas and solutions will come. It’s been great to see more women in the field since I was studying. From here, I can only see this increasing across the world as academic and commercial institutions become more aware of the benefits of this diversity. And I think that will lead to some really cool science innovations which is the most exciting thing.

Well, that’s certainly encouraged me to believe that things are headed in the right direction in terms of women in STEM. Thank you so much for your time, Rebekah, it’s great to get an insider’s perspective on gender diversity in science. And Melissa, keep up the fantastic work. I’m looking forward to having my own personal solar panels to keep all my gadgets powered when I’m on the move!

4 Myths about AI in CFD April 6, 2021 As Artificial Intelligence (AI) has become more ubiquitous in our everyday lives, so too has confusion about what it is…
Model-based design from ICEs to ICUs: Bridging the… November 10, 2021 The events of the past few years have turned global attention towards health and, more specifically, healthcare. From the images…
The 4 trends you should not miss in NVH engineering December 2, 2020 What is the role of noise, vibration, and harshness (NVH) engineering in the vehicle development cycle today? How does the…

This article first appeared on the Siemens Digital Industries Software blog at https://blogs.sw.siemens.com/simcenter/women-in-engineering-and-the-latest-development-in-solar-panel-technology/