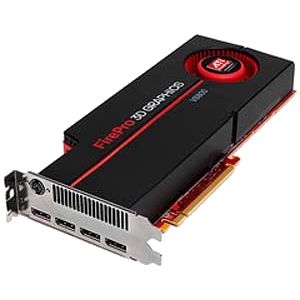 First, it is important to note that consumer video cards are mostly targeted at those running games  often featured on Microsoft’s DirectX API, which runs on the Xbox. In contrast to these, CAD/CAM/CAE programs, like NX, Solid Edge, and Femap run on OpenGL graphics which is more compatible with the softwares’ functions, and  runs on multiple platforms like Windows, UNIX, Linux and Mac OS X.

Thus, due to the nature of the softwares in question,  we want to make sure we get a graphics card that performs well with OpenGL. There are two vendors that offer such graphic cards for desktop and mobile stations, the AMD FirePro line, and the NVidia Quadro line. While consumer graphics cards may work fine, they are generally not tuned for OpenGL, and I would always recommend staying with the workstation class cards from either AMD or NVidia. In the AMD line, that would be the AMD FirePro W5000, W7000, W8000 or W9000. In theNVidia line that would be The Quadro K2000, K4000, K5000 or K6000 would be good choices. There are similar choices for laptops.

I would recommend at least 2 GB of onboard memory to take advantage of the latest OpenGL features with larger models. All of the cards can support multiple monitors, some up to 6 monitors in case you really need to run a lot of apps all at once! A well performing graphics card can really help large model performance for NX, Solid Edge, and Femap.

Feel free to ask if you have any specific questions on graphics cards.

4 Myths about AI in CFD April 6, 2021 As Artificial Intelligence (AI) has become more ubiquitous in our everyday lives, so too has confusion about what it is…
Is e-bike noise an issue? Quit whining! June 2, 2021 E-bikes become quite popular these days. Besides the operating range, also the generated noise is an important quality aspect for…
If you can’t take the heat… Simulate it! Reducing VTM costs… June 10, 2021 Find out how to efficiently and accurately simulate VTM using Simcenter Engineering's multi-fidelity workflows.
This article first appeared on the Siemens Digital Industries Software blog at https://blogs.sw.siemens.com/simcenter/which-graphics-card-should-i-buy/