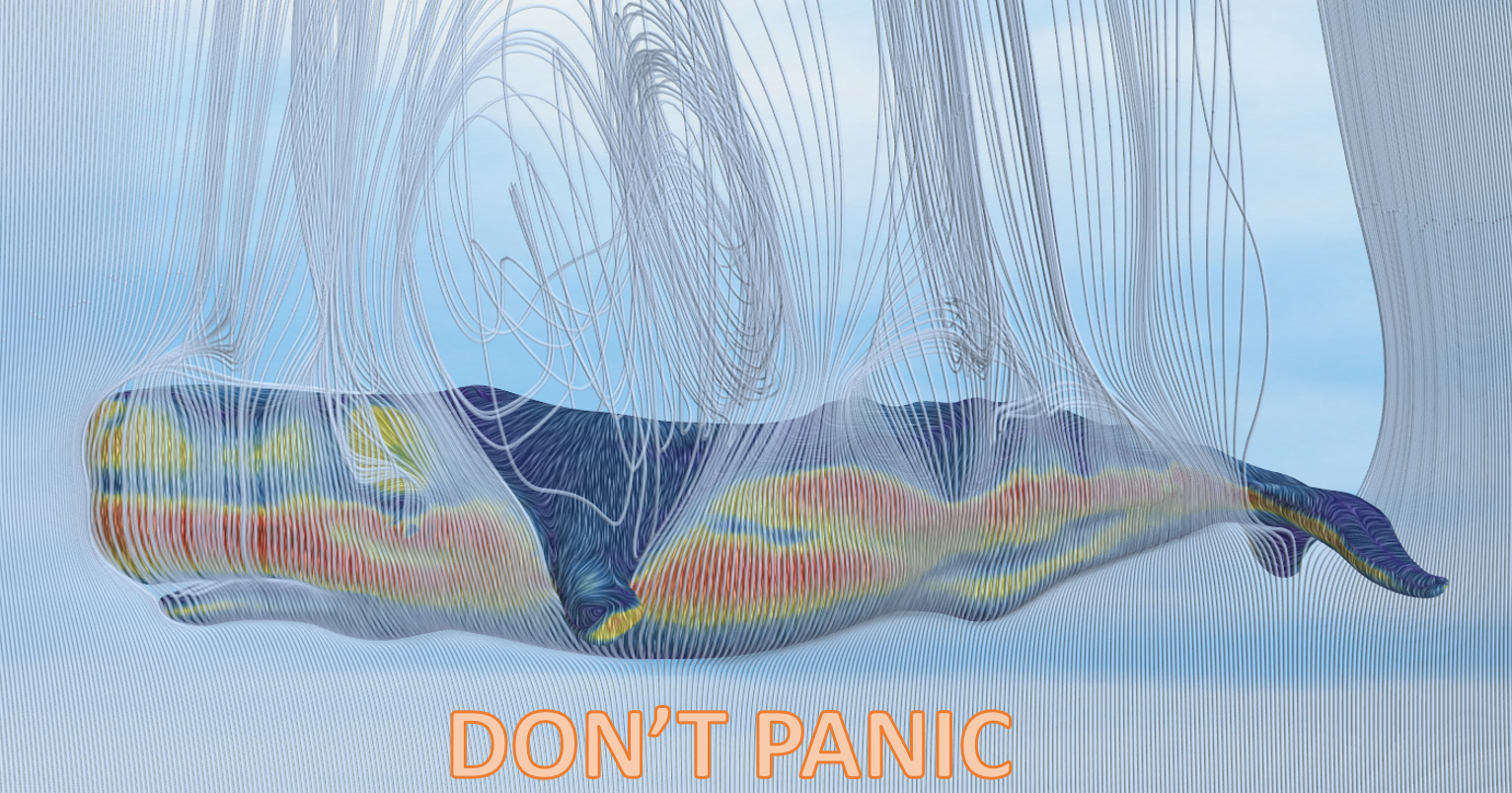 In many of the more relaxed civilizations on the Outer Eastern Rim of the Galaxy, the Hitchhiker’s Guide has already supplanted the great Encyclopaedia Galactica as the standard repository of all knowledge and wisdom, for though it has many omissions and contains much that is apocryphal, or at least wildly inaccurate, it scores over the older, more pedestrian work in two important respects.

First, it is slightly cheaper; and secondly, it has the words DON’T PANIC inscribed in large friendly letters on its cover.

Douglas Adams, The Hitchhiker’s Guide to the Galaxy

Hitchhiker’s Guide entry  #9472659 tells the story of a sperm whale that spontaneously comes into existence “several miles” above the planet Magrathea and spends the next approximately 90 seconds coming to terms with its existence.

Against all probability, a sperm whale had suddenly been called into existence several miles above the surface of an alien planet.

The 1980s TV series illustrates this with an excerpt from the guide in which the whale is shown dropping from 474km above the surface of the planet.

This is problematic for a number of reasons:

Since we know every single thought that crosses the whale’s mind during its brief existence, and that none of those thoughts is consistent with a mammal experiencing hypersonic reentry from the Thermosphere, we can safely conclude that the figure of 474km is one of many “wild inaccuracies” that The Hitchhiker’s Guide is famous for.

The purpose of this blog is to reconstruct the unfortunate whale’s last moments using computational fluid dynamics and to answer the following important questions:

We know little about the ancient planet Magrathea, however in the radio series, book, TV series, and film adaptions of the story, the crew of the Heart of Gold visit the planet’s surface. One of those crew members is Arthur Dent, who is visiting an alien world for the first time. Since he requires no breathing apparatus and walks out of the spaceship and onto the plant in a normal manner. From this, we can conclude that (1) Magrathea has an Earth-like atmosphere and (2) that the gravitational acceleration is broadly similar to that on earth.

I have assumed that the sperm whale is of average size, about 16 metres long and with a mass of 4100 kg and is spontaneously created in a horizontal alignment, with its belly facing the surface of the planet.

In most dramatisations of the Hitchhikers Guide to the Galaxy, the Whale’s internal dialogue lasts for about 90 seconds, which we will use as its total lifespan, and thus the total duration of the simulation.

1. What was the sperm whale’s speed of impact?

The simulations predict that (if it maintains a horizontal attitude) the sperm whale would reach a terminal velocity of about 178.3 m/s  (about 400 mph) after about 40s of freefall, which represents its speed of impact. 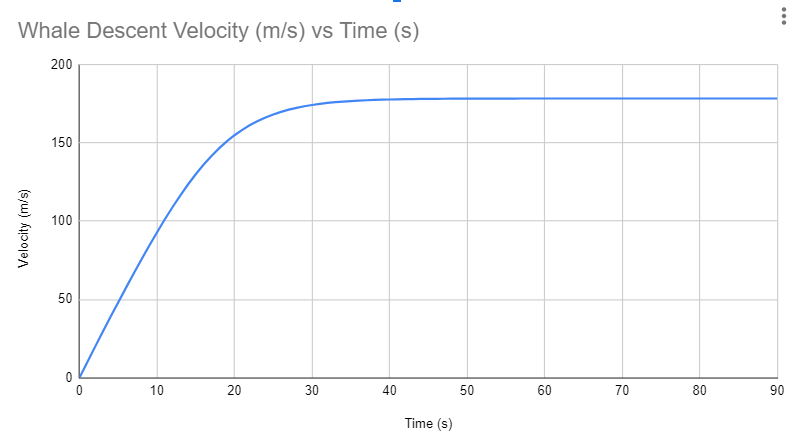 Travelling at a speed of Mach 0.5, it is likely that the whale would have suffered severe burning from aerodynamic heating. In the picture above the red areas on the sides of the whale illustrate the regions of maximum skin friction. Since the whale seems to be unaware of any discomfort, it is entirely possible that the period of heating was so small that the burning did not become enough of an issue to worry the whale during its final moments.

2. How far did the whale fall?

According to the simulation, an averaged sized sperm whale would fall about 14 km) in 90 seconds. This distance of about 8.75 miles sounds credibly like the “several miles above the surface” described by the Hitchhikers Guide. 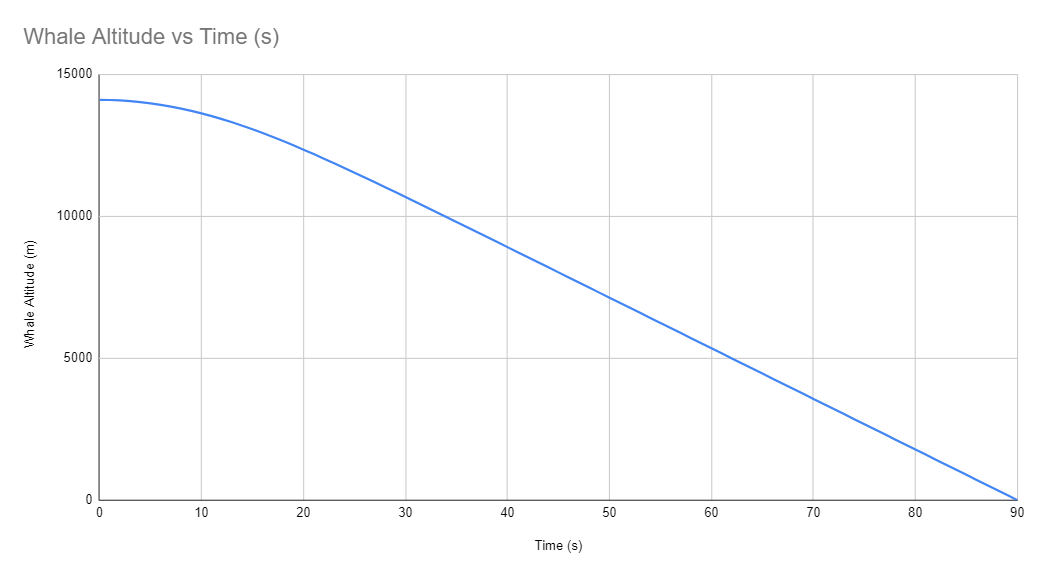 At an altitude of about 45,000 feet, it’s likely that any air-breathing mammal would suffer from extreme hypoxia, although that might explain the euphoric tone of the whale’s internal musings. However, such is the speed of its descent that the whale would rapidly reach the lower reaches of the atmosphere at which the oxygen saturation is much higher. However, breathing at 400 mph might represent a challenge.

This is about the altitude of a commercial airliner on earth, and an altitude easily attainable by a surface to air nuclear missile, which was the whale’s previous form of existence (before the emergency activation of the Infinite Improbability Drive), which offers further validation of the accuracy of this prediction.

3. How big was the impact crater?

4. What about the bowl of petunias?

Curiously enough, the only thing that went through the mind of the bowl of petunias as it fell was Oh no, not again. Many people have speculated that if we knew exactly why the bowl of petunias had thought that we would know a lot more about the nature of the universe than we do now.”

Douglas Adams – The Hitchhikers Guide to the Galaxy