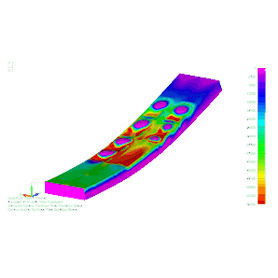 This is the second installment of a two-part series covering Advanced Nonlinear, looking specifically at Post-Buckling Behavior

We previously covered buckling behavior of a thin-walled cylinder. This tutorial will cover the nonlinear analysis of a box beam structure.

If you missed the first part of our post-buckling behavior demonstration using Advanced Nonlinear, click here.

Our next Advanced Nonlinear demonstration is on a box beam/wing-like structure.

We have an exterior skin and on the inside we have ribs, spars, a fore and aft spar, and stringers.

Looking at the thickness, the inboard region is much more supported than the outboard region.

The forepart of the wing has more support in the stringers than the aft part, which has no stringers.

One thing to point out about this model is that it is completely made from aluminum.

This model was built using nonlinear materials. We have found that “Nonlinear Plastic” is the best option for material non-linearity in Advanced Nonlinear.

If you’re going to use nonlinear plastic you need to make sure you have two things:

Looking at the Function

This is a stress vs. strain graph. In the elastic regime we’ve gone all the way up to 65 KSI and in the plastic regime we have extended it pretty far.

One tip for convergence: If you are going with nonlinear plastic material, you should try and extend the curve out as long as you can. Try to make sure that your model isn’t going to have to solve for anything outside the stress strain curve.

We’re going to jump right to the end, to the final time step.

As you can see, there are multiple skin buckles at multiple bays of this wing.

When you look at the back, not only has the skin started to buckle and shed its load, but it has started to affect other parts of the structure.

On the aft spar there is a buckle on the web and we have an aft spar that has exceeded yield stress over 50% of its area. (Making it likely to fail).

Looking at the inside, we see more activity.

The stringers have started to wave. There is out of plane motion and it is likely to unload.

Next lets start at an earlier time frame and see what happens when we ramp up the load.

As we can see, more and more skin buckles form and it eventually gets pushed into the spar.

The nice thing about Nonlinear is that even with all the buckling and non-linearity in our model, we’re still able to get a converging run and able to see what happens with a planned or unplanned buckle.

When you are running Nonlinear, this Analysis Manager will pop-up.

It charts how long it is taking for your solution to converge.

It’s not a straight line. The blips show where the model is having trouble converging.

If we recall our model, between time steps 20 and 30 is where our first skin buckle began to form.

You could use this to troubleshoot and figure out where you want to add more time steps or change your convergence parameters to push your solution to converge.

Advanced Nonlinear can be used to show a more realistic solution when geometric or material non-linearities exist. It’s able to capture buckles and continue to solve in order to investigate post buckling behavior.

4 Myths about AI in CFD April 6, 2021 As Artificial Intelligence (AI) has become more ubiquitous in our everyday lives, so too has confusion about what it is…
Is e-bike noise an issue? Quit whining! June 2, 2021 E-bikes become quite popular these days. Besides the operating range, also the generated noise is an important quality aspect for…
If you can’t take the heat… Simulate it! Reducing VTM costs… June 10, 2021 Find out how to efficiently and accurately simulate VTM using Simcenter Engineering's multi-fidelity workflows.
This article first appeared on the Siemens Digital Industries Software blog at https://blogs.sw.siemens.com/simcenter/post-buckling-in-femap-using-advanced-nonlinear/