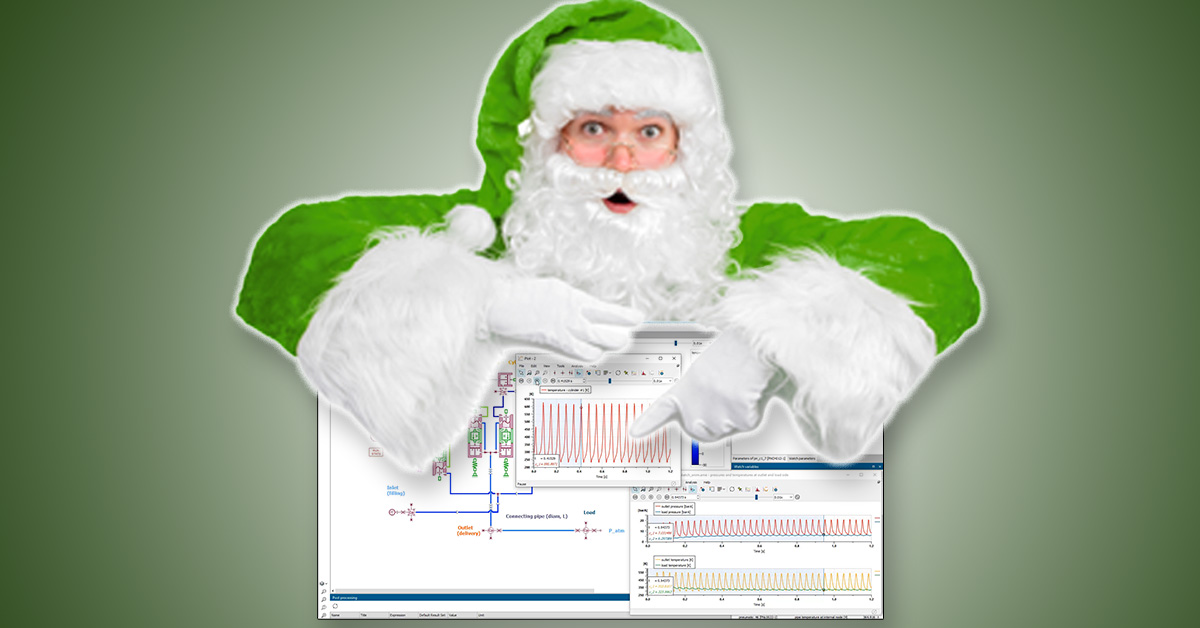 Santa Claus continuously reinvents himself to keep up with new challenges!

Santa is concerned this year. He observed several critical situations when delivering gifts last year, that could have been dramatic accidents for the children. He remembers this giant slide with a serious design flaw that resulted in children being thrown up in the air.

Also, his engineers – whose mission is to design new presents with simulation software – were too busy with foolish shenanigans than carefully designing toys to bring happiness around the world.

Santa’s engineers must concentrate on Christmas only; children expect innovative gifts every year. This year’s mega-trend is for digitalization with virtual versions of their legacy presents (eg. game consoles, …). So Santa’s engineers used the post advanced System Simulation tools to address the new requests with the short deadline of 12 months before the next Christmas comes around.

It’s like working in a big tech company, and engineers continuously evaluate whether to stay or move to greener pastures. As well as these human aspects, Santa also needs to manage new expectations, such as being carbon-neutral, sustainable, more efficient and with faster delivery to bring the presents on time. Santa said: “We know we are not going to make every single person happy every step of the way, but we can promise everything we do is done in the service of the children (and engineers!) we have cherished our whole lives. “

Santa has sleepless nights to find the right solutions

Santa wondered how he – and his engineers – could be more efficient, consuming less energy, to deliver the gifts faster. He came up with several great solutions, Santa needs to invest more on System Simulation! It’s not just for cars and planes, but also for green/renewable/decarbonized energies, manufacturing or ship delivery. System Simulation can turn dreams into reality!

2022 was the pivotal point in changing century-old habits

Santa was convinced he had to improve his processes, especially for manufacturing and delivery. He spent time thinking about which levers and best practices he could adapt, then he concluded that System Simulation could help.

1. Manufacturing and delivery must be improved

That was the reality: “We’re not different from the GAFAs as a World big tech company! So we should adopt the same tools and replicate what works well in other industries.”, said Santa Claus. And he started thinking about where he could benefit from the new technologies available today.

🏭♻️ For example, he investigated all the energy losses from his factories, and found nice tools to extract all the power and energy information all over his production machines to reach significant efficiency gains:

🚢🐟 For ship delivery, he also retrofitted cargo ships with Flettner rotors to improve propulsion. It’s a way to increase fuel economy and get significant reduction of CO2 emissions with just a small investment:

That’s perfect and already a nice achievement, but Santa thought his engineers could go a bit further to reach stellar outcomes!

Santa realized he visits millions of houses worldwide to celebrate Christmas. It’s millions of km requiring a lot of energy (kinetic, potential, propulsion, drag resistance, …) to reach his targets. Finally, more than the toy production itself, he has to review the entire production of energy upfront to be sure he’ll have a very low carbon footprint when considering the whole life-cycle environmental impact.

His engineers quickly found ways to produce their own electricity to supply all their factories worldwide. They naturally decided to go for green/renewable/decarbonized energies and selected wave energy converters and solar photovoltaic technologies. We could question the “why”, but the motivations are quite clear.

🌊⚡️ Waves from the oceans come from the rivers that were initially snow. Santa’s engineers are quite used to dealing with snow!

☀️⚡ For the solar photovoltaic solution, it was much trickier. Knowing that Santa’s engineers and factories are all located in Finland near the Artic Circle, so the sun is not always present. Nights last almost 19 hours per day, so the polar days are not the best place for producing solar energy! Still they found the Simcenter Webapp Server, a tool to help find the optimal settings for sizing the solar panels depending on the GPS location. It helped a lot, and they could simulate that it was sufficient to supply enough electricity for all their factories.

3. Why not celebrate Christmas directly in the Metaverse?

Suddenly, Santa wondered if making all this effort was really relevant. Today, there are technologies that allow us to be much more innovative. He heard about the Metaverse and it looked quite promising for solving all the pains he faced in his daily work. If everything becomes virtual with digital twins, his tasks would become much simpler for sure! He thinks about the energy production, the factories, the gifts and… no, not the children, we’ll keep them real to start with! (Except maybe the twins, who are not so far away from the “digital twins”).

He excitedly imagined a Perseverance rover for the children to play on the surface of Mars. In the Metaverse, it’s possible and a matter of a few seconds to generate additional gifts once a new child adds them to his Christmas wish list!

Also, to produce energy: why not just cut trees and burn them to get heat? Then convert it into electricity with gas turbines? That could be that simple, no need to care about CO2 in the Metaverse. At least at the beginning, it’s just starting so it’s like a new carbon-free planet, let’s see how it will evolve over the next decades. But right now, it looks like a clever solution!

The same thing for the packaging, Santa can just package “virtually” in the Metaverse. It’s quite straightforward with System Simulation, and no need for papers or liners. Only the digital twin of the converting machines and that’s it, it’s done!

Well, maybe it’s too early for this year. Metaverse still needs some adjustments to be 100% sure that all children would receive their digital gifts properly. Santa and his engineers finally decide to keep the traditional way of doing things, not changing the processes too quickly. Indeed, cross-checks and validation are needed first before such a massive deployment of a Metaverse solution worldwide! Let’s be pragmatic and keep a practical approach!

Santa and his engineers decide to complete the final deliveries with drones. During the year, they worked hard on the control algorithms and included a couple of improvements (navigation and guidance, obstacle detection, inspection). They needed to ensure the delivery of the parcels through the chimney flue on the first shot! And with no damage to the gifts.

Everyone will be really impressed by the accuracy of the delivery this year. Well done Santa and team, it’s an awesome achievement you reached there!

The Top No. 1 gift this year could have been a jar of mustard. Indeed, France’s favorite condiment has disappeared from stores due to a drought in Canada. The shortage has shocked consumers and hobbled the mustard industry. For sure a jar of mustard would have pleased every French child, but what bout the other children? Santa finally decided to go for a more traditional list of the best possible gifts for 2022.

No. 3 – A nice gift for children, a monster truck

All children will appreciate this for sure! They could practice parking even if they are under-aged to pass their driving licenses.

It’s like an extension of the tiny toy cars, except it’s significantly bigger!

No. 2 – A eco-friendly present for everyone, hydrogen!

Among the different possibilities for new sources of decarbonized energies, hydrogen emerged in 2022. There’s still some work to be done, but we can see the switch from some theoretical expectations to concrete applications with real components and systems popping up in various industries.

Hydrogen is indeed a nice gift, Santa reviewed the different possibilities to offer it in various industries: in automotive, aeronautics but also marine or railways. To accelerate the transition towards a carbon-zero world.

No. 1 – The Ultimate present … the Sketch Animation!

Well, it’s the best present ever, after being anticipated for such a long time! Still, it’s a bit of a specialized gift for the Simcenter Amesim users. Santa Claus is convinced this community of users will definitely grow over the years, so for sure offering Sketch Animation at Christmas was a good decision to make thousands of people happy for this Christmas 2022!

🔵🟢🟡 This is indeed a nice present, Santa Claus! What a clever choice!

How the robot reindeers and the elves helped Santa save… December 17, 2021 Read about the trials Santa has been through this year and how he solved them using Simcenter software and digital…
Lifecycle Insights - Guided simulation workflows: A… March 28, 2022 Engineers are increasingly adopting simulation early in the design process. And it’s easy to see why this shift-left strategy is…
10 ultimate Christmas gifts for a CFD engineer December 21, 2022 What's the perfect Christmas gift for a CFD engineer. 10 ultimate ideas.

This article first appeared on the Siemens Digital Industries Software blog at https://blogs.sw.siemens.com/simcenter/needed-skilled-elf-engineers-to-create-best-ever-christmas-gifts/