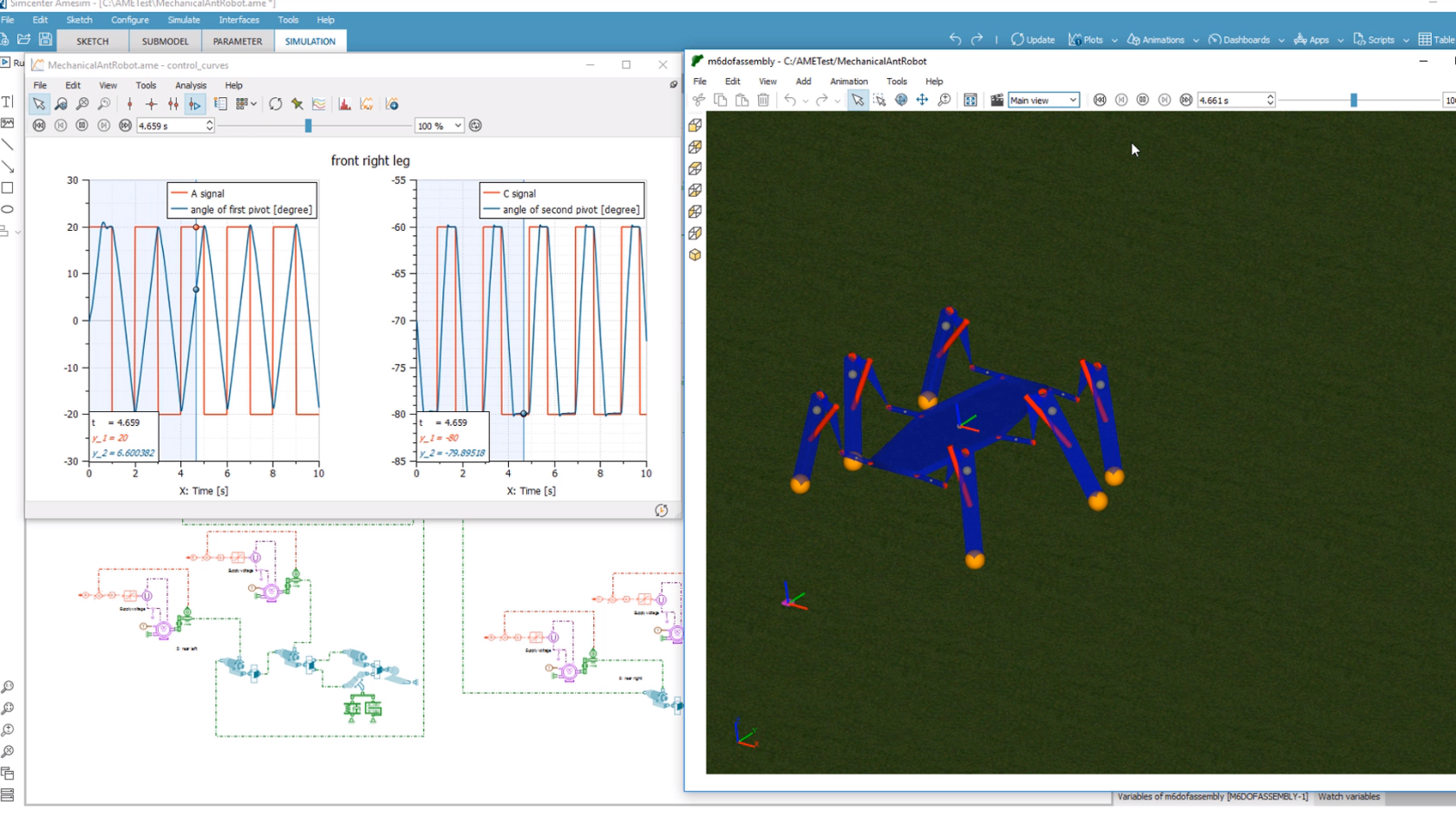 Many simulation tools exist. But a lot of them are mainly dedicated to a single physical domain: fluids, electrics, mechanics or thermal, for instance. Others are more dedicated to an application such as combustion engines, transmissions, vehicle dynamics, power electronics, controls, etc.

But in the real life, whatever the application you are working on is (automotive, aerospace, machinery industry, marine…), systems are becoming more and more complex. Many physics and components are involved and interact with one another. In this context, engineers need to integrate in a unique platform all the physics and components of their systems in order to reduce as much as possible:

All these libraries are compatible. Simcenter Amesim makes possible to explore all the physics in a single simulation tool while significantly reducing license costs, models’ complexity as well as the time required to build a system model and to run your simulations. In Simcenter Amesim, mechanical systems can be handled thanks to a large set of models available i n the Mechanical, the Planar Mechanical and the 3D Mechanical libraries. It makes possible, for instance, to predict the behavior of multi-body systems such as loader cranes, excavators, mechanical lifters and clamps. Engineers can validate and optimize their designs by predicting the 2D or 3D motion of the components, forces in the system, as well as interactions with actuator subsystems and controls.

Many demos and templates are included in the software in order to demonstrate modeling capabilities and drastically accelerate the modeling process. as hydraulic networks including valves, compressors and pumps, heat exchangers and refrigerant loops.

By getting started rapidly with demos and templates, engineers can optimize the design and the performances of a single component such as a pump. In parallel, with the same simulation tool, they can also evaluate and improve the integration of this component in the whole system. For instance, it makes possible to reduce losses and power consumption, as well as to reduce pressure pulses generating noise and vibrations.

For automotive applications, Simcenter Amesim enables you to predict the thermal comfort in the cabin, taking into account the architecture and the sizing of the HVAC system, but also the cabin configuration, the color of the car…

Example of an electrical application

Simcenter Amesim also features libraries dedicated to electrical phenomenon and applications: the Electrical Basics, the Static Conversion, the Electric Motors and Drives and the Electri Thanks to off-the-shelf electrical components and ready-to-use templates, engineers can predict electric motors’ performances, taking into account the machine controls. They can also compare different battery technologies in order to select the best one to ensure optimum performance and ageing. Thanks to the multi-physics capabilities of Simcenter Amesim, one can also predict interactions between the battery cells and the battery pack thermal management system.

Example of an automotive application As an example, let’s take a look at the real-time simulation of a vehicle for the sine and dwell analysis.

A model can be generated using the Simcenter Amesim Vehicle Dynamics solution, capturing the dynamic behavior of both the vehicle dynamics and the braking ystem. Post-processing tools such as 3D animations allow you to better visualize the vehicle behavior.

Example of an aerospace application Aerospace engineering challenges can be addressed within Simcenter Amesim thanks to libraries and tools dedicated to flight dynamics, aircraft engines, landing systems, fuel systems and many more. For instance, Simcenter Amesim can be used to simulate a rejected takeoff. This is the situation occurring when the pilot decides to abort the takeoff procedure. Normally, the rejected takeoff is performed only if the aircraft speed is below a given limit but it is also mandatory for the aircraft to be able to stop safely before the end of the runway. This procedure is part of the qualification procedure for all airplanes. Modeling the aircraft and the braking system with Simcenter Amesim enables you to easily and safely check the aircraft stopping capability in this scenario.

Example of an industrial machinery application For instance, it is possible to model a robot including the kinematics of the different moving components, actuators, controls, interactions with the surroundings.

Want to see how it works? Watch the movie

4 Myths about AI in CFD April 6, 2021 As Artificial Intelligence (AI) has become more ubiquitous in our everyday lives, so too has confusion about what it is…
Surfboard CFD - Riding the Digital Wave July 29, 2022 The flip-flop engineering symposium Monday, December 9, 2019, 7 pm. Sunset Beach Elementary School Cafeteria, Oahu's North Shore, Hawaii. Two…
Model-based design from ICEs to ICUs: Bridging the… November 10, 2021 The events of the past few years have turned global attention towards health and, more specifically, healthcare. From the images…
This article first appeared on the Siemens Digital Industries Software blog at https://blogs.sw.siemens.com/simcenter/many-physical-domains-and-applications-in-one-system-simulation-tool/