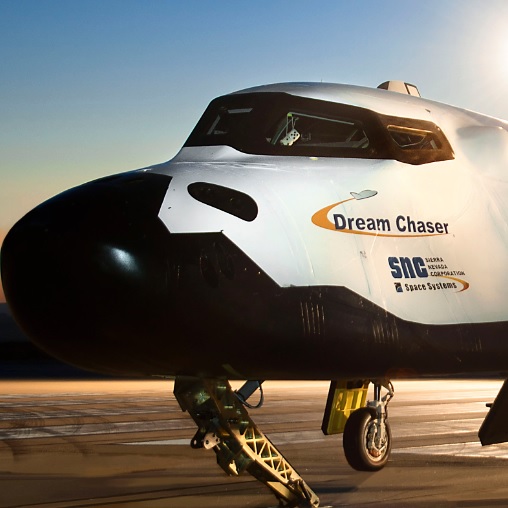 What do you get when you cross a spaceplane that has almost a decade of engineering development with an Atlas V rocket? This was the thinking behind Sierra Nevada Corp.’s new take on the space shuttle, the Dream Chaser.

Photo credit for the SNC Dream Chaser goes to NASA.

Dream Chaser gets this ability from the HL-20, a concept spaceplane corporate vice president of SNC Space Systems Mark Sirangelo found under a tarp in the corner of a NASA hangar.

The idea to use an existing vehicle was a strategic move on Mark’s part. At the time, he and the team were part of a company called SpaceDev that SNC later acquired, and they didn’t have much to work with in terms of time or money.

Since the HL-20 had nine years’ worth of development put into it and more than 1,200 wind tunnel tests performed on the body design, it saved them a lot of legwork. But the HL-20 was still just a body.

This is where the Dream Team comes in. SNC recognized the importance of collaboration. “We take the track that we’re not experts in everything,” Mark says in a Desktop Engineering article. So to bring the Dream Chaser to completion, SNC took experts from across industries.

This is where Siemens PLM Software’s role becomes evident. SNC uses NX CAE for pre- and post-processing files with NX Nastran as its solver, and Teamcenter manages the CAE data. Because NX is open, it works with files created by any other system. This integrated approach fits with SNC’s vision.

A big part of that vision is reducing costs while improving safety, says senior director and co-program manager John Curry. Stakes are high in space travel: People can die from minor errors. Thus, safety is especially important. Simulation-driven design is the key to meeting these goals, John adds.

Simulation-driven design lets SNC engineers make informed decisions about the safety of a design before costly prototypes are ever made.

NX also resulted in time savings of 20% for SNC, says John Roth, SNC Space Systems vice president of Business Development. Time savings are important, because of the Dream Chaser’s increased complexity over the original space shuttle due to its software.

4 Myths about AI in CFD April 6, 2021 As Artificial Intelligence (AI) has become more ubiquitous in our everyday lives, so too has confusion about what it is…
10 insights from rocket CFD for a mind-blowing moonshot July 29, 2021 This is your guide to a successful moonshot project - with 10 insights that only rocket CFD (Computational Fluid Dynamics)…
If you can’t take the heat… Simulate it! Reducing VTM costs… June 10, 2021 Find out how to efficiently and accurately simulate VTM using Simcenter Engineering's multi-fidelity workflows.
This article first appeared on the Siemens Digital Industries Software blog at https://blogs.sw.siemens.com/simcenter/making-the-dream-chaser-come-true-with-nx/