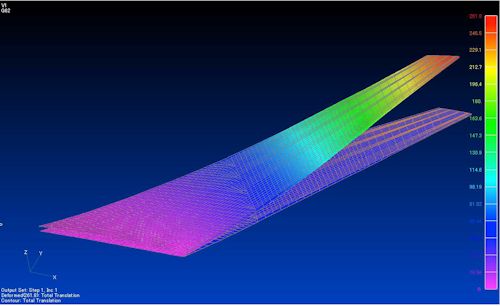 The Chofu Aerospace Center (CAC) Aerodrome Branch of the Japan Aerospace Exploration Agency (JAXA) develops advanced engineering technologies for future applications. The scale of research ranges across many diverse types of structure including an airplane wing, a spacecraft fuel tank and causes of carbon fiber delamination. In each case the finite element analysis (FEA) solvers required for those analyses vary considerably. JAXA uses Femap as the pre- and postprocessing program for these analyses, taking advantage of its ability to interact with most industry standard solvers. By using just one pre- and postprocessor, JAXA reports benefits in terms of reduced training costs for student research assistants and reduced workload for creating an FEA model, allowing more time to be spent solving research problems. Most manufacturers use FEA to verify designs, but the simulation methodology employed by the JAXA researchers goes beyond that. Once they have developed a new FEA model – from mathematical formulae in Microsoft Excel – they import the model into Femap using a macro, and then submit to the solvers for analysis. Post analysis, the results are read into Femap and then sent back to Excel for further postprocessing. The transition of data to and from Excel is achieved using Femap’s application programming interface (API).

Future expectations are that simulation at JAXA will involve increasingly larger models with a need to perform both overall and macro-level analyses.

You can read the full case study to see how JAXA take advantage of Femap to reduce costs and increase R&D efficiency.

4 Myths about AI in CFD April 6, 2021 As Artificial Intelligence (AI) has become more ubiquitous in our everyday lives, so too has confusion about what it is…
Apollo 13: The First Digital Twin April 14, 2020 The behind the scenes story of how NASA used Digital Twin technology to bring a crippled spaceship safely home.
Fatigue Simulation of Short Fiber Reinforced Composites March 16, 2020 Introduction It’s no secret that reducing the weight of materials is key to cutting CO2 emissions – but the question…