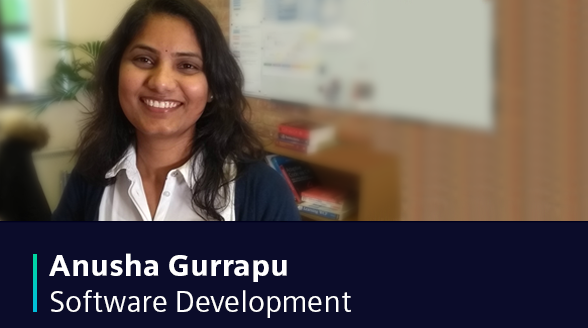 “The only question anyone had about my future was who would I marry? That didn’t sit well with me, so I became determined to have a career of my own.”

What was your background? Was it very physics-oriented?

Not really. I did my bachelor’s degree in Electronics Engineering, but since joining Siemens I have learned a lot about the physics involved in the solutions our customers rely on us to deliver.

Have you always wanted to be an engineer?

Growing up in India, I knew nothing about career opportunities in engineering or science. In fact, I only discovered that those careers existed by spending time with my friend’s grandmother as a child. She would always be asking me: “Anusha, who do you want to marry? An engineer or a doctor?”

I didn’t know any working women at the time – all the women I knew stayed at home to raise children and manage the home. That was the culture I grew up in, so the only question anyone had about my future was who would I marry? That didn’t sit well with me, so I became determined to have a career of my own. And, because people clearly believed that the only worthwhile occupations were engineer or doctor, I knew I wanted to be one of those!

Was your family supportive of your choice?

My big worry was that I would spend years studying and then not be allowed to work in the field I chose. My parents always wanted us to be highly educated and they worked so hard for that. But in terms of working, their stance was that I could do what I wanted until I was married and then my husband would decide whether I would continue working or not.

All through my childhood I saw young women’s futures being decided for them. It didn’t seem fair to me and I was always questioning it. It was a very gentle rebellion on my part. That was just the mindset and culture at that time where I grew up. This situation has improved a lot over the years and now it’s common for women to start working after their studies.

My family were always supportive of my career choices. It was a big decision for my father to send me to the UK to pursue my studies, as I was the only female (even now in 2021) in my entire family to move out of the country for further studies. In fact, my sister and I are the only 2 females who have a master’s degree in our family.

Without my family & colleagues’ support, I wouldn’t have been where I am today in my career.

What made you choose engineering over medecine?

It was a tough decision, made even tougher by the fact that there was no one in my circle of friends and family who I could look to for advice. Ultimately, I chose engineering because I really enjoyed Maths and felt I would be better at it.

I completed my bachelor’s degree in India and was offered an engineering job, which never actually transpired. So, in 2009, I decided to come to the UK to pursue a master’s degree. Afterwards, I started looking for employment and received the call from Flowmaster, (today part of Siemens). I immediately recognised it as a fantastic opportunity because I would get the chance to work in a field related to my studies and solve real-world problems. So, I accepted their offer and started work in July 2012, as a Software Test Engineer.

Naively, I thought there would be several women on the team. I believed that the lack of women in engineering was something only seen in developing countries like the one I had grown up in. But when I walked into the office on my first day, I was the only woman there!

Eventually, I discovered a couple of other women in the building. But all were working in other fields like sales and marketing and we were really a minority in the business.

My new colleagues were clearly not used to working with women. They were never unkind, but just didn’t know how to deal with me. Years later, one of my team admitted that when he saw me, a woman, on the list of interviewees, his first thought was to wonder whether I was “any good” or not! I still find it surprising that someone as intelligent as he, believed that my gender would have any bearing on my ability as an engineer.

Did you feel the pressure to perform better as a result?

Yes, on occasion. There were never any negative comments, but I did have to work hard to feel included. When I joined, all the senior members in the team helped me to understand the product and work. I joined as a Test Engineer and didn’t then know how to code, so I would hear all these conversations about the code and feel unable to participate. So, I started to learn how to code, my team has always been encouraging, and this really helped. I became a Software Engineer and was then able to contribute to these discussions and feel more like part of the team.

When I first joined, I was painfully shy, but I have grown both personally and professionally since. Until my Mentor noticed that I’m good at leading a team, I never thought I’d be capable of it. I’m sure that a few people in the department were surprised when someone as shy as me became a Team Lead!

Has the situation improved for women?

I would say that it has. But there is still a gender bias, both in terms of the number of women joining the profession and the way that they are treated when they do.

As Team Lead, I am involved in the recruitment process and we now have two female interns working with us and they’re great. One told me recently that when she went to an engineering careers fair and asked a question at the reception desk, the young man there (a fellow student) immediately assumed that she was in the wrong place. So, the attitude that “women don’t do engineering” is still there. And I must admit that I don’t get many CVs from women.

Why do you think so few women go into engineering?

I think about this a lot and to be honest, I’m not completely sure. But I do think that women see this as a difficult field and doubt their own abilities to do well in it. It’s true – this is a demanding job where you rely on your knowledge and problem-solving capabilities and you have to be constantly learning to keep up to date. That’s easy to do when you have time after work, but once other responsibilities like childcare arise – which still typically fall to the woman – the amount of time you can invest in yourself falls dramatically.

What would you say to women who are considering an engineering career?

Do it! Seriously. Connect with other people and go to them for advice and guidance. I didn’t have anyone I could talk to about my career choices when I started out but there are more women working in the field today and they’ll be delighted to help you. And once you start, don’t give up. There will be times when you wished that you had chosen a simpler path like some of your friends but stick with it: the rewards both personally and professionally are well worth it.

You are more than capable of doing the job and you can make a good career out of this. What’s more, you’ll enjoy it!

What do you enjoy most about the job?

I can answer this from two perspectives: my role as an engineer and my role as a team lead.

The best bit about the job for me as an engineer is sitting down with the team and brainstorming a solution to a customer’s problem. And when we’ve finally solved it, hearing our customer’s gratitude and knowing that we’ve made the world a better place, even if in a very small way.

Additionally, as a team lead, I really enjoy developing individuals by finding opportunities that they are interested in that align with business objectives so that they can grow in their career. I take a lot of pleasure in seeing people grow professionally and personally, as I have.

What’s the worst part of the job?

Probably the frustration of seeing that the solution you were confident in, is not working and being up against tight deadlines to deliver one that do. That’s part of the job, unfortunately. But you just go back to basics. That will give you clarity of thought and enable you to move on and start enjoying the process again.

And, finally, is there any woman you particularly admire in this field?

Honestly, I admire so many women both inside and out of this field. I am constantly amazed by how talented and capable my female friends, colleagues and family members are and I couldn’t possibly single one out. Women are amazing!

4 Myths about AI in CFD April 6, 2021 As Artificial Intelligence (AI) has become more ubiquitous in our everyday lives, so too has confusion about what it is…
Is e-bike noise an issue? Quit whining! June 2, 2021 E-bikes become quite popular these days. Besides the operating range, also the generated noise is an important quality aspect for…
Meet the Team – Alberto Deponti January 17, 2022 Meet Alberto Deponti, Product Manager for Simcenter Flomaster & Simcenter Amesim. He tells us of his journey, philosophies and his…
This article first appeared on the Siemens Digital Industries Software blog at https://blogs.sw.siemens.com/simcenter/international-womens-day-anusha-gurrapu-2/