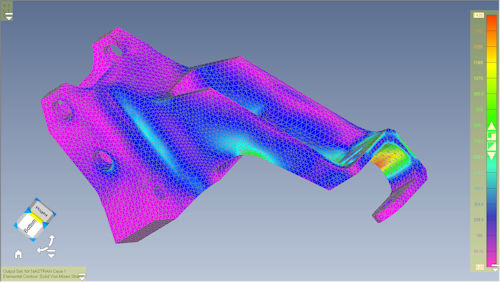 The release of Femap version 12 is just around the corner, so let’s take a look at what’s coming in this latest version, starting with visualization and user interface enhancements.

The first thing you will notice when you start Femap version 12 is the refreshed appearance of the user interface. The user interface is key to the usability of a graphical software product like Femap, and with every release we strive to make it easier and more intuitive. In version 12 the modernized Femap look is evident with new color schemes that improve viewing particularly on large displays and high-resolution monitors that are becoming increasingly more evident these days. In version 12 we’ve added more interactive controls that allow you to move and reposition graphics screen entities including titles, axes and the contour legend simply by using the mouse.

As far as visualization is concerned, the new feature and silhouette lines will give you a clearer view of the finite element model by highlighting the model outline.

Watch the video below to see what’s new in visualization and the user interface for Femap version 12.

Stay tuned! We’ll be outlining more new features and capabilities of Femap version 12 as we run up to the release.

4 Myths about AI in CFD April 6, 2021 As Artificial Intelligence (AI) has become more ubiquitous in our everyday lives, so too has confusion about what it is…
Surfboard CFD - Riding the Digital Wave July 29, 2022 The flip-flop engineering symposium Monday, December 9, 2019, 7 pm. Sunset Beach Elementary School Cafeteria, Oahu's North Shore, Hawaii. Two…
Model-based design from ICEs to ICUs: Bridging the… November 10, 2021 The events of the past few years have turned global attention towards health and, more specifically, healthcare. From the images…
This article first appeared on the Siemens Digital Industries Software blog at https://blogs.sw.siemens.com/simcenter/femap-12-preview-of-visualization-and-user-interface-enhancements/