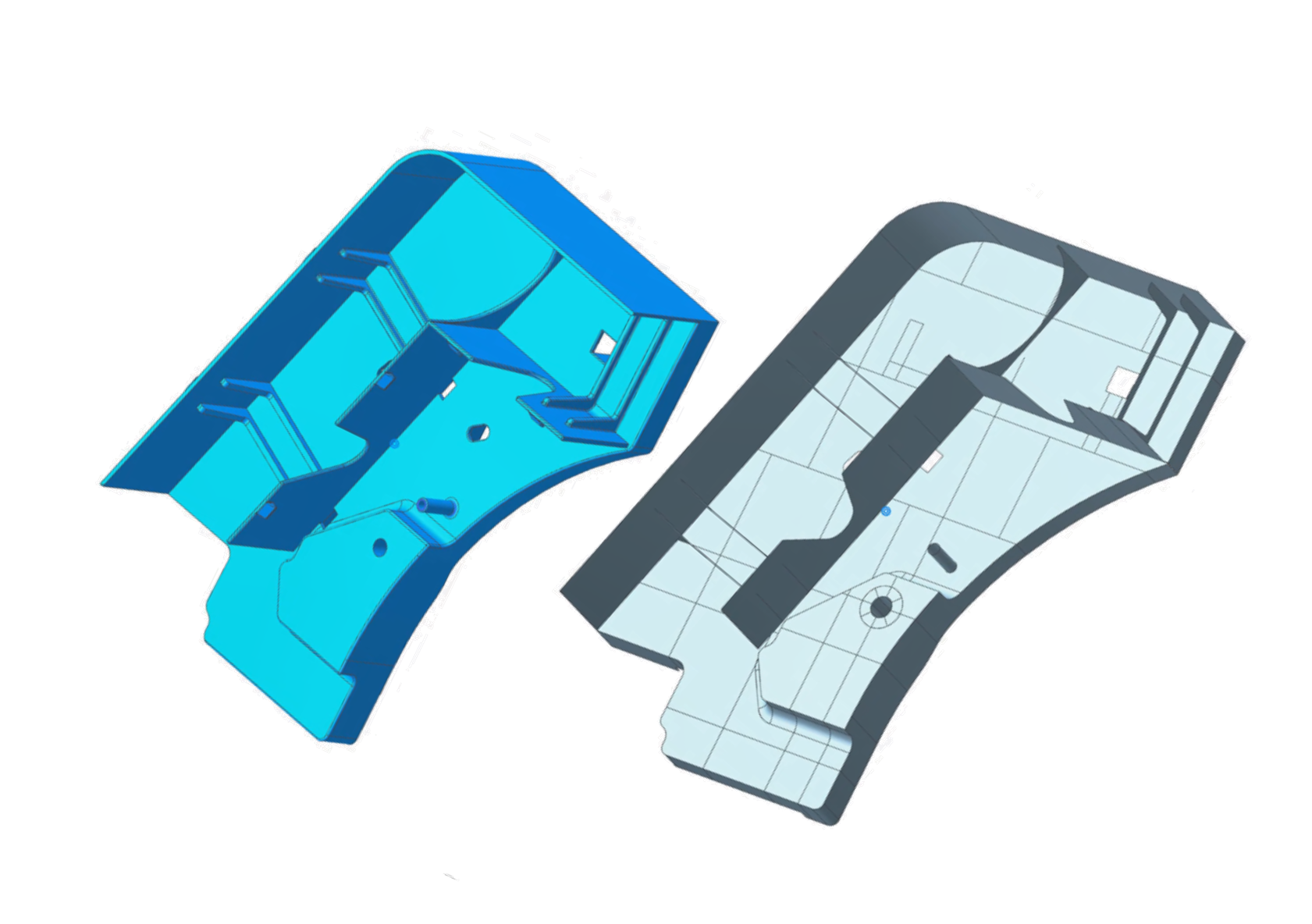 One of the main issues you face as an analyst is the need to clean, defeature and midsurface geometry you import from CAD. Features like small holes, small steps and surfaces impact meshing speed and quality but can be irrelevant to engineering performance. You might also have to create midsurface geometry for thin-walled solid geometry so that you can create a shell mesh instead of a solid mesh. On average, for each design iteration, engineers spend an entire day or more just on geometry cleanup activities when using more traditional standalone CAE preprocessors. This wastes time that you could better spend doing real engineering.

The source of the geometry data itself poses an additional challenge. CAE pre-processors usually do not support all CAD data equally. This results in data translation issues, lost or inaccurate geometry and ultimately in the need for even more manual geometry cleanup.

By using Simcenter 3D for pre-processing, you can leverage powerful direct geometry editing tools in the Simcenter 3D Engineering Desktop to clean and defeature geometry as well as create midsurfaces in a fraction of the time it takes for traditional CAE tools to perform these tasks.

Suppose you need to remove a small surface from within a cylinder. This small surface is unimportant since it will result in very thin, poor quality elements. Since this design feature is not critical to analysis, it should be removed.

With Simcenter 3D, you only need to perform 3 simple clicks to complete this task:

After clicking OK, the thin face is made co-planar with the top face, thereby removing the step within the middle of the cylinder. The cleanup procedure in this example takes just seconds in Simcenter 3D, where other CAE preprocessors could have taken hours to edit this geometry.

Another common challenge that analysts face happens when they get solid geometry for thin-walled parts. From a simulation perspective, it’s usually better to represent thin-walled parts using shell elements instead of solid elements. But in order to create a shell mesh, you need surface data at the mid-plane between the inside and outside faces of the solid geometry.

This is where midsurfacing comes in. Many CAE preprocessors don’t have the ability to create midsurfaces at all, while others only have limited midsurfacing capabilities that tend to create more problems than they solve due to varying thicknesses of the solid part.

The source of the CAD data does not matter in trying to accomplish the task just discussed. Even if the designer revises the geometry outside of Simcenter 3D, you only need to import the latest CAD revision into Simcenter 3D, and your prior defeature and midsurface geometry edits will all automatically be applied to the new design revision. This saves you a significant amount of time, not just in a single design iteration, but in all subsequent iterations as well – thereby improving overall product development efficiency.

An example from Design Automation Associates (DAA), an engineering service firm located in the United States, shows the kind of measurable productivity benefits you can achieve by using Simcenter 3D to defeature and midsurface geometry. On one particular project using their original CAE preprocessor, DAA spent 12 hours alone just to midsurface thin-walled geometry. They also spent 63 hours to preprocess the entire model, just for one iteration.

DAA then decided to try Simcenter 3D on the same project and geometry, where they had great success. When using Simcenter 3D, DAA was able to completely midsurface and stitch the model in just one hour – a 92% time reduction!

To see for yourself, you can try Simcenter 3D online today for free! Sign up today to begin a 30-day free online trial of Simcenter 3D. There’s no need to install any software, and you will be able to run Simcenter 3D in a cloud-based environment to see for yourself just how intuitively and quickly you can defeature and midsurface geometry.

Simcenter 3D Free Trial
Contact us
Want to stay up to date on news from Siemens Digital Industries Software? Click here to choose content that's right for you

4 Myths about AI in CFD April 6, 2021 As Artificial Intelligence (AI) has become more ubiquitous in our everyday lives, so too has confusion about what it is…
Simcenter™ FLOEFD™ 2021.1: What’s New? April 29, 2021 What's New in the latest Simcenter FLOEFD 2021.1 version? Electromagnetics, structural simulation and much more. Find out for yourself.
What's New in Simcenter Mechanical simulation - 2212 Release January 24, 2023 Predict mechanical performance of your detailed product designs across multiple physics disciplines. Learn what's new in the Simcenter Mechanical 2212…
This article first appeared on the Siemens Digital Industries Software blog at https://blogs.sw.siemens.com/simcenter/defeature-and-midsurface-geometry-quickly/