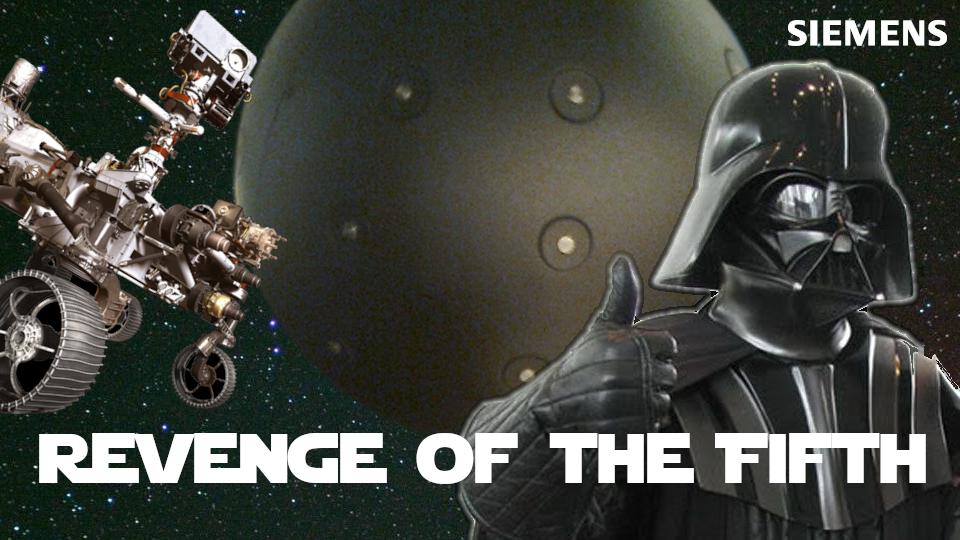 You’ve probably heard of May the 4th, the international day celebrating the Star Wars franchise and the Jedi themselves. But if you sometimes feel like stepping over to the Dark Side, we have you covered with your very own holiday: the Revenge of the Fifth. Grab your lightsaber and enjoy these (rather awesome) Star Wars facts:

The TIE fighter was the undeniable symbol of the Imperial fleet. Carried aboard Star Destroyers, the TIE fighters were single-pilot vehicles designed for fast-paced fights with the Rebel X-wings. The history behind the iconic TIE fighter sound however may come as a surprise. Sound designer Ben Burtt created the distinctive TIE fighter sound effect by combining the sound of a vehicle driving on wet pavement with.. an elephant call!

Burtt’s idea to use the elephant’s trumpet inspired us to try a similar experiment. With the increasing popularity of hybrid and electrical vehicles, the use of active sound enhancement techniques to perfect the cars’ sound design is also becoming a standard step in the design process. So if you would like to embrace your inner Sith and make your Tesla Model S to sound like a TIE fighter, the Simcenter Testlab Sound Designer is here for you:

If you would like to learn more about AVAS and Sound Design, you can also watch the recording of a webinar organized by the Audio Product Education Institute on Acoustic Vehicle Alert System (AVAS) and Automotive Sound Design:

One of the most iconic sounds from the Star Wars franchise has to be the blaster. Ben Burtt confirmed in an interview that the sound sample behind the iconic “Pew! Pew!” was discovered by accident during a hike. When passing underneath the guy-wires of a radio tower, Ben accidentally bumped into one of them. The rest was history. The sad news is, my dear Sith apprentices, that lasers in space do not really go “Pew! Pew!”. NASA recently released the audio recordings taken during the Mars mission of the Perseverance rover (you can find the complete list here: [link]), and while lasers on Mars are pretty cool on their own, they unfortunately go “Snap!”.

Here’s an audio replay comparison between the Perseverance’s laser and an Imperial army-issued Blaster. Both are replayed and analyzed using the Simcenter Testlab Neo:

While celebrating the Revenge of the Fifth day, we should no forget about the crown jewel in the Imperial fleet, the moon-sized battle station Death Star. The first Death Star was approximately 160 kilometers in diameter. Due to its colossal size and the generated power, it had both a magnetic and artificial gravitational field of a planet.

The on-board crew consisted of over 400,000 droids and over a million non-robotic personnel. Forbes estimated that it would cost $852 quadrillion dollars just to build it. That number does not take into account the skyrocketing (pun intended) daily maintenance cost. So while we cannot satisfy Emperor Palpatine’s desire to directly control the Galactic Empire, we can at least present you the Death Star’s tiny brother from the Simcenter portfolio. Behold, the mini Death Star the Simcenter Testlab 3D Acoustic Camera!

Sadly, the 3D camera does not come with a superlaser that can wipe out planets (which makes our HR department very happy). It does however allow you to localize sound sources in closed interior spaces, such as car or truck cabins. Accidentally, Volvo Group recently hosted a very interesting webinar “Inside the Volvo Group sound lab – What will future vehicles sound like?”. You can see the mini Death Star 3D Acoustic Camera in action, starting around 0:20:20.

That’s it for today, dear Sith supporters. Remember to join the Dark Side and we will see you next year on the Revenge of the Fifth day!

10 insights from rocket CFD for a mind-blowing moonshot July 29, 2021 This is your guide to a successful moonshot project - with 10 insights that only rocket CFD (Computational Fluid Dynamics)…
You can(’t) leave your head on. Headless Horseman leverages… October 31, 2022 How much greener can a Headless Horseman truly become without a fake pumpkin head? Aerodynamics CFD will reveal the answer
4 Myths about AI in CFD April 6, 2021 As Artificial Intelligence (AI) has become more ubiquitous in our everyday lives, so too has confusion about what it is…
This article first appeared on the Siemens Digital Industries Software blog at https://blogs.sw.siemens.com/simcenter/attention-jedi-lackeys-today-is-revenge-of-the-fifth/