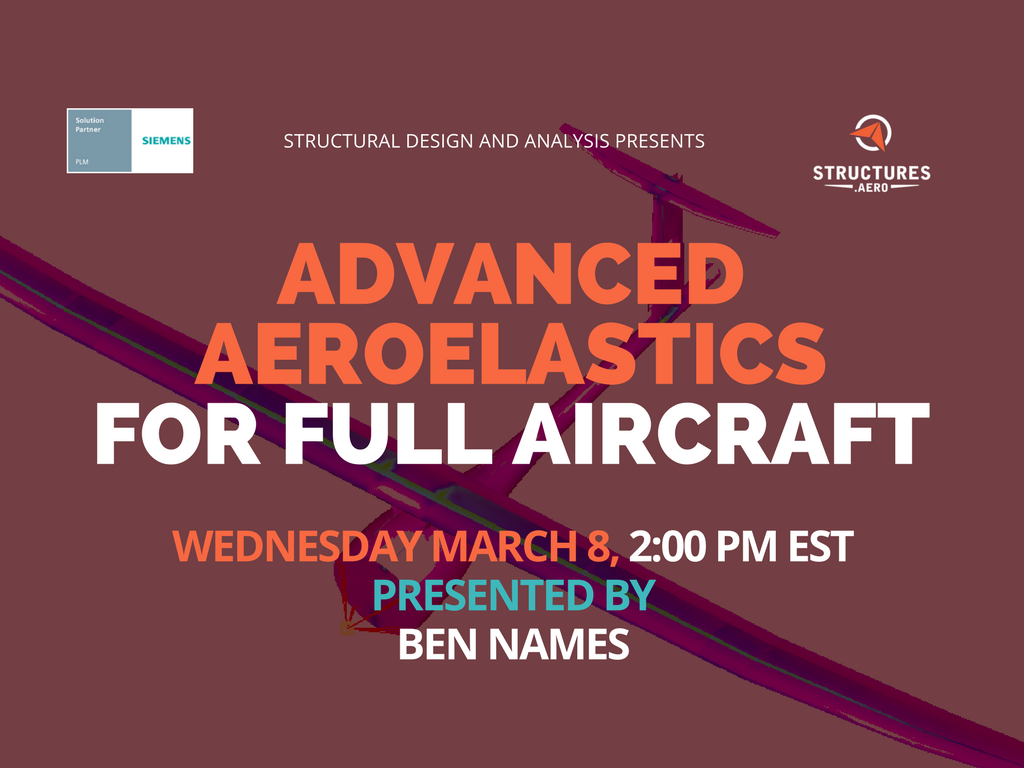 When aeroelastic flutter is first introduced, it is often framed as a wing instability.

However fluid-structure interaction can impact an entire vehicles structure.

In fact, some instabilities only present themselves when the behavior of an entire vehicle is taken into account. This can include a flutter instability due to the coupling of a vertical tail surface first bending mode, the first fuselage torsion mode, and the main wing first torsion mode.

A great example of this “full vehicle instability” can be found in the “Flutter at a Glance” video produced by NASA Langley:

Despite the goofy music, this shows that dangerous instabilities can exist and only become evident when the inertial, elastic, and aerodynamic forces of the entire vehicle are considered.

Another example of this is a phenomenon known as body freedom flutter.

In a previous webinar Structural Design and Analysis showed how the static aeroelastic analysis module could also be used as a means of generating loads on a wing. This analysis can be expanded when the entire aircraft structure is considered.

In addition to using SOL 144 to generate loads, it can also be used to trim the control surfaces for the aircraft, giving accurate loads such conditions as coordinated turns, and pull ups. In addition, the relevant stability derivatives of the vehicle can be extracted from the results of such an analysis as well.

Upcoming Webinar on Aeroelasticity in NX Nastran and Femap On Wednesday, March 8th, SDA will hold a webinar that will cover some of the more advanced topics related to NX NASTRAN’s Aeroelasticity solutions including:

The first topic to be covered will be how to set up an aeroelastic trim analysis on an entire aircraft, and how to interpret the results. This will include how to setup a control surface, apply appropriate support constraints, and apply incidence/twist angles to the wing aerodynamic surfaces.

4 Myths about AI in CFD April 6, 2021 As Artificial Intelligence (AI) has become more ubiquitous in our everyday lives, so too has confusion about what it is…
If you can’t take the heat… Simulate it! Reducing VTM costs… June 10, 2021 Find out how to efficiently and accurately simulate VTM using Simcenter Engineering's multi-fidelity workflows.
Is e-bike noise an issue? Quit whining! June 2, 2021 E-bikes become quite popular these days. Besides the operating range, also the generated noise is an important quality aspect for…
This article first appeared on the Siemens Digital Industries Software blog at https://blogs.sw.siemens.com/simcenter/aeroelastic-analysis-of-a-full-aircraft/