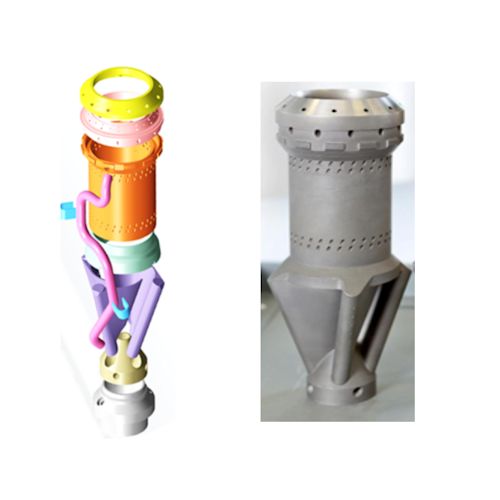 Power with a Capital P…

Modern human existence depends on electrical power.  We barely know what to do with ourselves when the WiFi goes down, much less the power grid. A city with one million residents uses about 10,000 MWh of energy every year.  That is 10,000 kilowatt hours per resident.  (The average US household in 2016 was more like 10,766 kWh, but who is counting?)As the need for electricity has increased, the need for efficiency of production has risen accordingly.  It is not just the production of the energy, but also the production of the energy making machines.  This is one of the many reasons why energy companies are looking at additive manufacturing.

Here at Siemens, we have several interesting examples of additive manufacturing being used in our own energy business.

One of the more interesting projects at Siemens to use additive manufacturing is that of a waste fuel burner we call the “Combiburner.”  This type of burner is used to efficiently recycle dirty waste fuel, turning it into a productive energy source.

Special internal channels optimize the delivery of fuel and coolant to the burner head.The original version of the burner had many concentric tubes, one inside the other that all had to be welded together along with several other parts giving access to each of the tubes so that fuel agents and cooling agents could flow through the burner.  This version took a multitude of parts and welds to construct the final burner.

Once reimagined for additive manufacturing, the entire complexity of those concentric pipes, and the complicated structure to support them, was condensed down into just the head of the burner, which is less than a foot long.  Using creative thinking, Siemens NX, STAR-CCM+, and HEEDS to optimize the solution, they were able to manufacture the burners faster, with 50 percent fewer parts, and 50 percent fewer welds, reducing the assembly complexity by a large amount.

This is one good example of the “Complexity comes cheap” comment you often hear around additive manufacturing. The original mult-part burner, and the final printed one-piece version.There is a burner model of a different type that is also being produced using additive manufacturing at Siemens.  This burner is used in a power generation turbine as part of burner nozzle/mixing apparatus.  Large turbines from the Siemens Power Generation division, such as the SGT-800, can use as many as 30 of these burners to produce energy efficiently.

So, what do you do when the power goes out?  Is it a welcome respite from your digital life, or do you go crazy wondering what social media posts you’re missing?  I would love to hear how electrical power affects your life in the comments below.

This is the fourth in a series of posts about additive manufacturing in industry.

Ashley Eckhoff has a background in engineering and has been with Siemens for over 20 years in various capacities.  He has spent the last few years deep-diving into additive manufacturing in both product design and marketing roles.

What's New in NX for Manufacturing (December 2021) December 10, 2021 The holiday season is upon us, and this year we’re gifting a new release of NX for Manufacturing! With the…
How data security in the manufacturing industry relies on… June 22, 2022 In this blog, we will take a deeper dive into the modern infrastructure for machine shops, namely the benefits of…
The Quadcopter Story with the Digital Machine Shop June 6, 2021 What does it take to manufacture a quadcopter? How does the Digital Machine Shop transform the manufacturing process? Find the…

This article first appeared on the Siemens Digital Industries Software blog at https://blogs.sw.siemens.com/nx-manufacturing/additive-manufacturing-energy-industry-power/