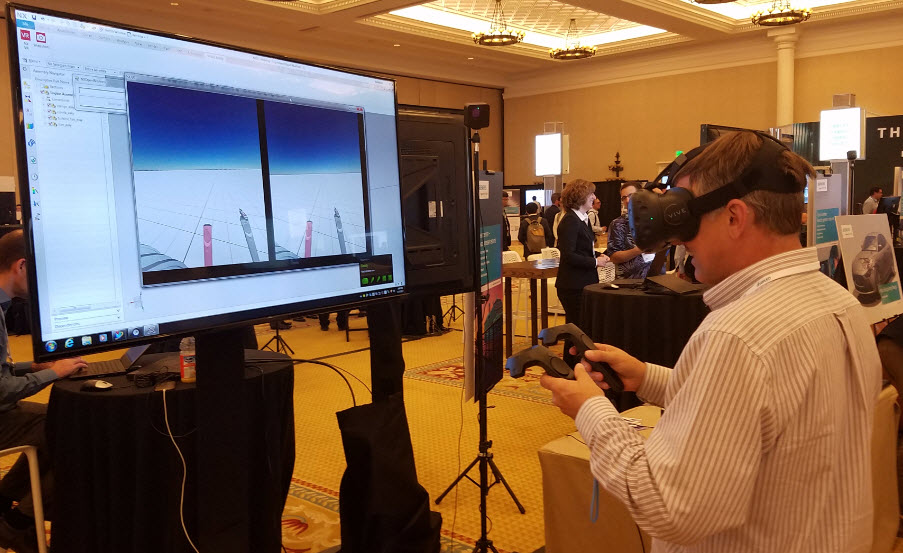 Working with the VR development, an early prototype version of the software was set up in conjunction with HTC VIVE Virtual Reality System, giving attendees the opportunity to review and provide feedback to a full-sized jet engine. Using several commands within the NX VR environment, users were able to section the jet engine assembly, select a designed component (or components), VR would display critical attribute information of that NX part, and enable users to capture NX Snapshot of the view state (show/hide, section, view orientation.).  Snapshots could be “replayed” in the VR immersive environment as well as in the NX environment. Many testers had the opportunity to experience this NX VR functionality, and comments included: “this is awesome!”, “When can I have this capability in the production release of NX?”, “My customers would love this!”, “The section display of this engine is very detailed!”, “I can do this all day!”, “Wow, this is fantastic!” We are very excited about this upcoming enhancement in the NX future release, and please look for other blog posts about this new functionality.

Community Spotlight: Candra Diningrat and the Bugatti Chiron… March 8, 2021 Meet Candra Diningrat. NX expert with a full design workflow of a Bugatti Chiron Pur Sport. This plus much much…
Configuring NX for Automatic Updates over LAN March 10, 2021 Welcome to this step by step guide by our NX expert Pat Mcmanus of Product Engineering Software here at Siemens.
Share your NX story at Realize LIVE 2022 November 9, 2021 REALIZE LIVE 2022 | LAS VEGAS | BERLIN We are extremely excited to announce our Realize LIVE event is back…

This article first appeared on the Siemens Digital Industries Software blog at https://blogs.sw.siemens.com/nx-design/running-vr-virtual-reality-with-nx/