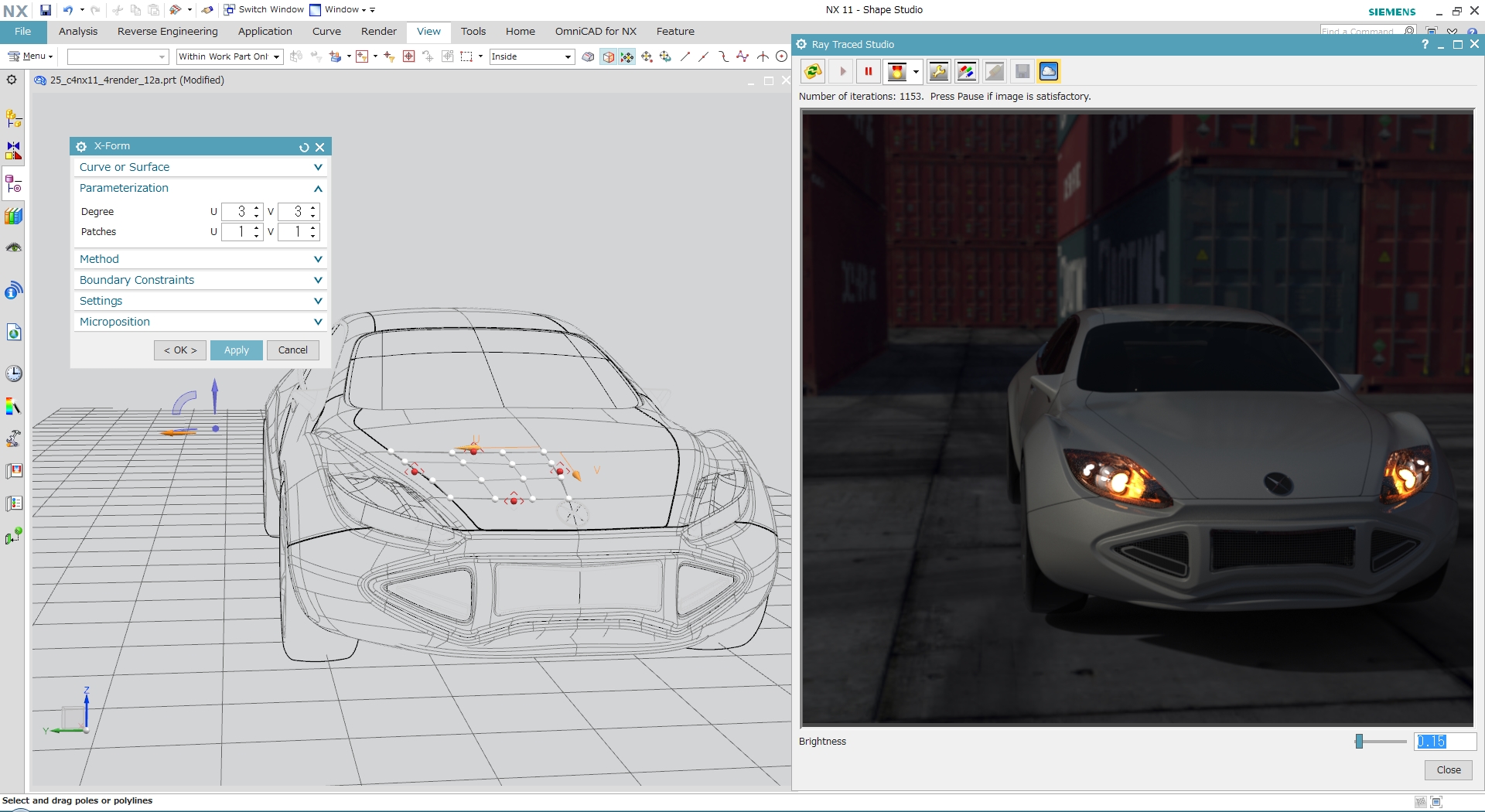 Many aspects of NX high end rendering are enhanced in version 11. The new Iray® rendering engine for NX Ray Traced Studio, scenes, materials, and metal or emissive materials are all examples. I hope that these are big help to make nice realistic or visualized validation 3D images and dynamic ray traced display in NX for your product development process.

To produce a ray traced image, we need to wait for multiple ray tracing calculations in the NX Ray Trace Studio window. An iteration is a step in the process of progressing from a preliminary “noisy” image.  At each iteration the image is updated towards a final, good image. Each iteration use a lot of machine resources and computing power in the form of CPU and GPU. During the calculations, NX or any other application such as e-mail, desktop publishing, or spreadsheet creation competes for these resources. Everything on your laptop or workstation can be affected.

When we use remote rendering for ray traced rendering in NX, the rendering calculations are done by the “remote server”.I had a chance to use an NVIDIA Visual Computing Appliance or VCA machine as the Ray Traced Studio remote rendering server; hundreds of iterations are done within a few seconds, thousands or more within a few minutes. We once needed an entire night to get the same kind of result 15 or 20 years ago. Sometimes old UNIX workstations were burned by the heavy midnight computing in the office. The speed today is impressive and appreciable.

We also have the option in NX to use a “normal” workstation as the server. The speed is not as fast as with a VCA, but when the server workstation has good CPU and GPU for ray tracing, iterations are done quickly enough to not have much of an impact on your workflow. When I’m using remote rendering, I can use “My Machine” for other apps as usual.  If using two monitors, we can place the Ray Traced Studio window on the second monitor while we concentrate on an operation in NX (or any office application) on the first. In this way, we may be able to totally forget about the iterations while they compute.

To use the Ray Traced Studio remote rendering functionality, NX users must have an NVIDIA Iray Server license. Today, only high end visualization products are used for “Visualized Validation” in the market to see Gap, Flashness or Translucent Material Parts. The Iray Server price is not so expensive. I hope that you will consider doing this kind of visualization validation on NX. Configuring NX for Automatic Updates over LAN March 10, 2021 Welcome to this step by step guide by our NX expert Pat Mcmanus of Product Engineering Software here at Siemens.
Community Spotlight: Candra Diningrat and the Bugatti Chiron… March 8, 2021 Meet Candra Diningrat. NX expert with a full design workflow of a Bugatti Chiron Pur Sport. This plus much much…
NX Render Blog Series | The Visualization Process for The… December 2, 2021 Introduction For anyone who isn’t an expert in rendering, creating an environment like one that the Princess Yacht X95 is…

This article first appeared on the Siemens Digital Industries Software blog at https://blogs.sw.siemens.com/nx-design/nx-11-visualization-and-the-remote-rendering/