We recently returned from a short vacation – I am still suffering the jet-lag! We went to Seattle [where I have been a couple of times before] and Vancouver to visit some family. I have visited the United States countless times [I’m guessing 70 or so visits], but this was my first trip to Canada – a country I have been wanting to visit for a long time. Having traveled quite a lot over the years, it is becoming unusual for me to experience a “new” country, so I thought that it would be interesting to record my impressions …

To be frank. My first impressions were not so positive. We had travelled from Seattle by bus, which worked well. Bus stations tend to be located in the less chic parts of cities and this one was no exception. We had selected an Airbnb not too far away. The short walk there did not show Vancouver at its finest. The accommodation was OK – just as advertised. We set out to find some lunch, crossing a part of town where there were more homeless people than I have ever seen elsewhere. We passed through a park that was like a refugee camp. We later learned that this concentration was confined to a few blocks, but it was, nevertheless, quite shocking. Never have I seen so many discarded syringes and needles. Apparently, Vancouver is the only big city in Canada where the homeless can survive the winter, as it is not quite so cold. In addition, there has been a significant problem with drug abuse – specifically Fentanyl – which is exacerbated by the fact that the city is a port serving the Pacific Rim.

Although we like walking [and we did a lot in Vancouver!], the option of getting an Uber is handy. Except that they do not have Uber! There has been much opposition to ride-sharing services being licensed in the city. Of course, the traditional taxi drivers are doing their best to dissuade the authorities from licensing Uber. However, from what we heard, their bad behavior [refusing to take people etc.] is working against them; every taxi has a “taxi refusal” phone number on the side to enable reporting of difficulties.

Thus far, my comments do not reflect well on Canadian people. However, for the most part, we found everyone friendly, welcoming and helpful. [Although arriving at conclusions about 37 million people from a brief visit to one city is, of course, unwise.] We went to a brew house for lunch and the waitress was very friendly; nothing too unusual there. However, when we returned for dinner the following day, we were served by a different person, but the friendly waitress spotted us and came over to chat and see how we were enjoying Vancouver. On another occasion we were at a train station and found ourselves on the wrong side of a ticket barrier [too complicated to explain why!]. We grabbed the assistance phone and were told that a member of staff would be with us soon. In a couple of minutes, a uniformed woman came along to help. She immediately understood our problem and opened the barrier for us. She was very happy to answer some questions about day tickets etc. – really genuinely friendly and keen to help. I think public transportation staff in some other cities have a lot to learn. We made a brief visit to an art gallery, just before closing time. As the time approached a member of staff was wandering around letting people know that they would close soon. I said that I was awaiting my wife, who was in the restroom. She said, smiling: “Right. I’d make a run for it if I were you.” Odd sense of humor, but good to have one. 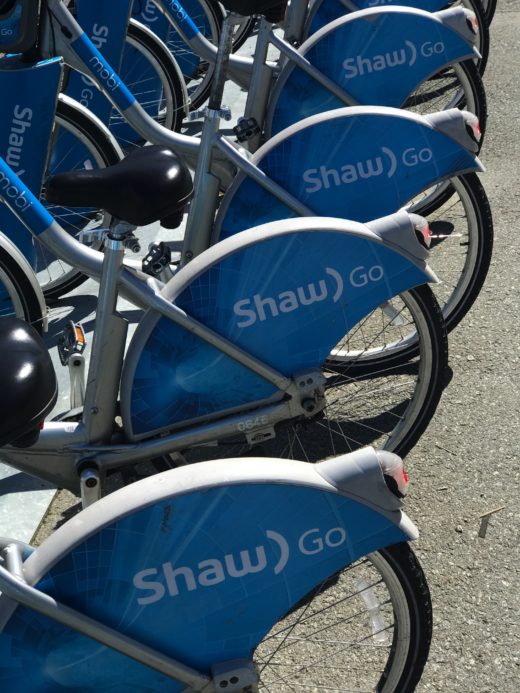 We mostly got around the city on foot and walked many miles. But we also found bicycles handy. Like many cities, there was a grab and go cycle rent system. You just pay a modest sum for a 24 hour pass and you can then take a bike and ride it for up to 30 minutes and return it to another station and do this as often as you want. It worked well, except there was a systems failure in the evening, which denied us bikes. It was not too inconvenient, but I contacted Customer Service, who promptly refunded us the fee.

Among the things that, to me, always feel rather foreign in the US are measurement units, spelling and many different words for everyday things. Canada appears to offer a halfway house. They seem to be on their way to being metric, just like we are in the UK. They measure distance in kilometers, but they do use old units for, say, beer. There appeared to be some confusion about the size of a pint: 16oz [US] or 20oz [UK]? Temperature is in Celsius; I know where I am with that. Although I understand how Fahrenheit works, I can never figure out why anyone would want to use it. Most words seem to be spelt the English way, but Canadian speech is littered with American words.

As the Canadian Dollar is worth less than the US Dollar, we found that, after conversion, everything was cheaper than we might have expected. For the most part, we did not use any actual cash. We did end up somewhere that did not accept cards, but US Dollars were fine. Like everywhere, contactless payment was quite common. I enjoyed the terminology used: “Do you what to tap?”

I always find signage in different countries interesting. It is usually addressing the same problems, but illustrates different ways of going about it. Vancouver seemed to have a lot of signs, most of which were easy enough to comprehend, but one stymied me: an octagon with a line through it. I asked a family member, who explained that a Stop sign was octagonal. So, the crossed-out octagon meant “No stopping”. Obvious really.

In talking about the country and the people, we inevitably ended up playing “6 famous Canadians” [which proved to be much easier than the usual version with Belgians]. We came up with: Joni Mitchell, Leonard Cohen, James Taylor, Michael Bublé, Justin Trudeau, Celine Dion. Interesting that 5 of them are musicians and they include life-long favorites of both mine and Libby’s.

If you are wondering about the title of this posting, it comes from the beautiful Joni Mitchell love song “A case of you”, that contains the lines:

Security of Medical Devices – A Changing Regulatory… March 2, 2022 Over the past two decades, medical devices have been increasingly likely to be connected to the outside world using Wi-Fi,…
OFF-TOPIC: End of an era February 25, 2021 In 1986, when I started my job at Microtec Research, I visited the United States for the first time. Specifically,…
OFF-TOPIC: 12 things done or not December 17, 2020 Each year I make a list of “things” that I plan to do. You might call them “goals”, but I…

This article first appeared on the Siemens Digital Industries Software blog at https://blogs.sw.siemens.com/embedded-software/2019/05/02/oh-canada/